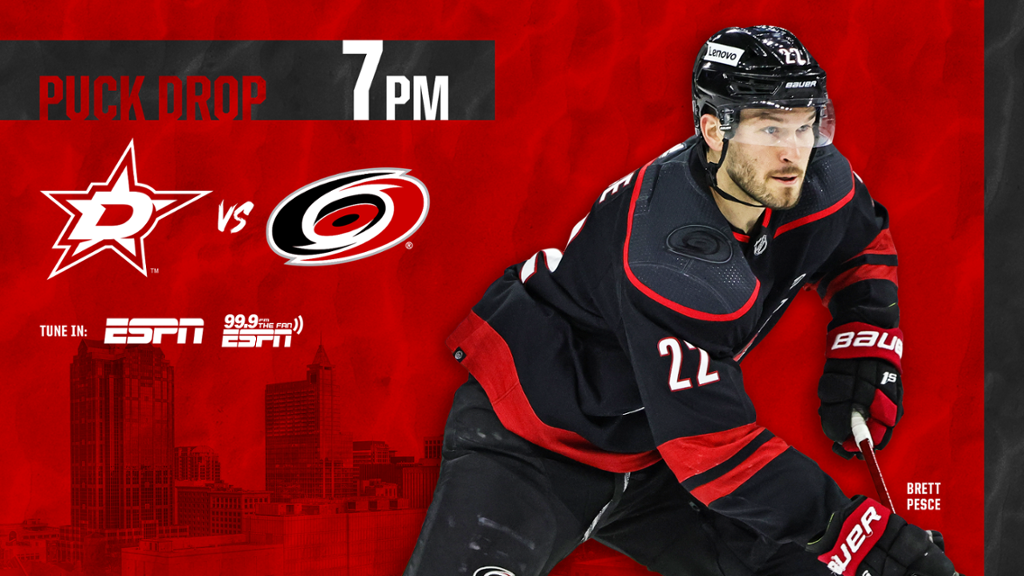 RALEIGH, NC. – New acquisition Max Domi is set to play his first game with the Carolina Hurricanes tonight as they host the Dallas Stars.

Last Time Out: The Canes scored twice on the power play Tuesday night, paving the way to a 3-2 victory over the Tampa Bay Lightning at PNC Arena. Martin Necas, Tony DeAngelo and Sebastian Aho were the goal scoreres for Carolina while Frederik Andersen earned his 31st win of the year in net.

Domi Day: Forward Max Domi is expected to make his Canes debut tonight after being acquired from Columbus on Monday. Wearing #13 this evening, he posted 32 points in 53 games with the Blue Jackets before the deal. His first goal with the Canes will be the 100th of his NHL career.

Hey, We’re On ESPN!: Tonight’s telecast can be found on the ESPN, featuring a commentary team of Bob Wischusen and Brian Boucher. Mike Maniscalco, Tripp Tracy and Alec Campbell will handle the radio duties on 99.9 The Fan.

Two For Two-Four: Seth Jarvis had two assists in the team’s win over Tampa on Tuesday, the second time in the last three games he has posted multi-point games. Now up to 24 points in 49 games, Jarvis ranks sixth in scoring among players selected in the 2020 draft.

Enjoying The Home Cooking: Carolina’s victory over Tampa was their 24th win at PNC Arena this year, the third-most home wins by any NHL club. Now 13-1-2 in their last 16 games in Raleigh, the Canes have just eight home games remaining after tonight.

A Look At The Other Side: Dallas trailed 3-2 with six minutes to go in regulation Tuesday night. Two goals in 24 seconds later, they were in the driver’s seat in what would become a 5-3 comeback win. They are 6-4 in their last ten games but have not had as much success on the road as they’ve had at home this year, currently touting a 14-16-2 record when away from the American Airlines Arena. Veteran Joe Pavelski has been the guiding force for the offense, producing over a point-per-game thus far this season, totaling 64 points in 62 outings.

What Are We Wearing?: The team will be wearing their black sweaters tonight.

Burnside: Examining The Lead-Up To The Deadline For The Canes

Kotkaniemi Elated To Be A Cane For The Long Haul