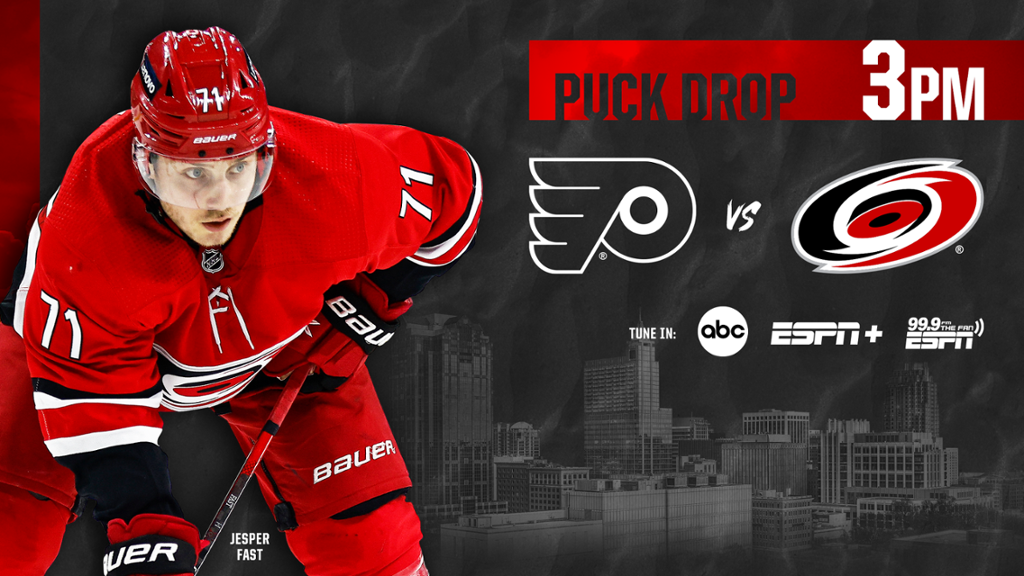 RALEIGH, NC. – For the fourth and final time this season the Carolina Hurricanes and Philadelphia Flyers go toe-to-toe today.

Last Time Out: While Rod Brind’Amour downplayed the idea of calling it a statement win, Thursday’s shutout victory over the league’s leaders in points was certainly a big moment in the team’s season. Antti Raanta stopped all 36 shots faced for his second clean sheet of the season as Frederik Andersen remained day-to-day. Ethan Bear scored the game-winner in the third and Sebastian Aho put the icing on the cake with an empty netter minutes later.

The Best Is Yet To Come: Thursday’s win over Colorado was the 40th win of the season for the team. Now with a record of 40-12-5, that is the most wins and points through 57 games in franchise history.

In The Crease: After morning skate on Thursday Brind’Amour said he thought Andersen would play this weekend. Whether that meant today or tomorrow, he did not specify. The head coach is expected to address the media at 12:45 p.m. with further info.

Home Cooking: The Canes have points in 12 straight home games, dating back to their win over Vancouver on January 15. It is currently tied for the second-longest streak in franchise history and should they earn a point today, they’ll move into sole possession of second place. The only time a team has earned points in more than 13 games was the 2005-06 team, which went on to have a run of 14-0-1.

Full 60: Bear’s game-winner and Aho’s empty net goal moved the team’s goal differential to +31 in the final frame of regulation this year. With that being the best in the NHL, Carolina has outscored their opponents 70-39 in the last 20 minutes of games.

Nationally Televised: Today’s contest will be broadcast to a national audience on ABC. Sean McDonough will have the play-by-play call and former Whaler Ray Ferraro will be on color commentary. Emily Kaplan has the reporting duties as John Buccigross and Chris Chelios will be in studio. Mike Maniscalco, Tripp Tracy and Alec Campbell will have the radio call.

A Look At The Other Side: The Flyers allowed four to Florida in the first period on Thursday, putting themselves behind the eight ball early. They were able to come back and make it 4-3 after 40 minutes, but the Panthers got back to scoring in the third for the eventual 6-3 final. Philadelphia is 3-5-2 in their last ten games and is tied for the league-low with just seven wins away from home this year.

More Milestones:  Derek Stepan is one point shy of 500 for his NHL career. Jordan Staal is four points shy of 600 for his career.

What Are We Wearing?: The team will be wearing their red sweaters today.