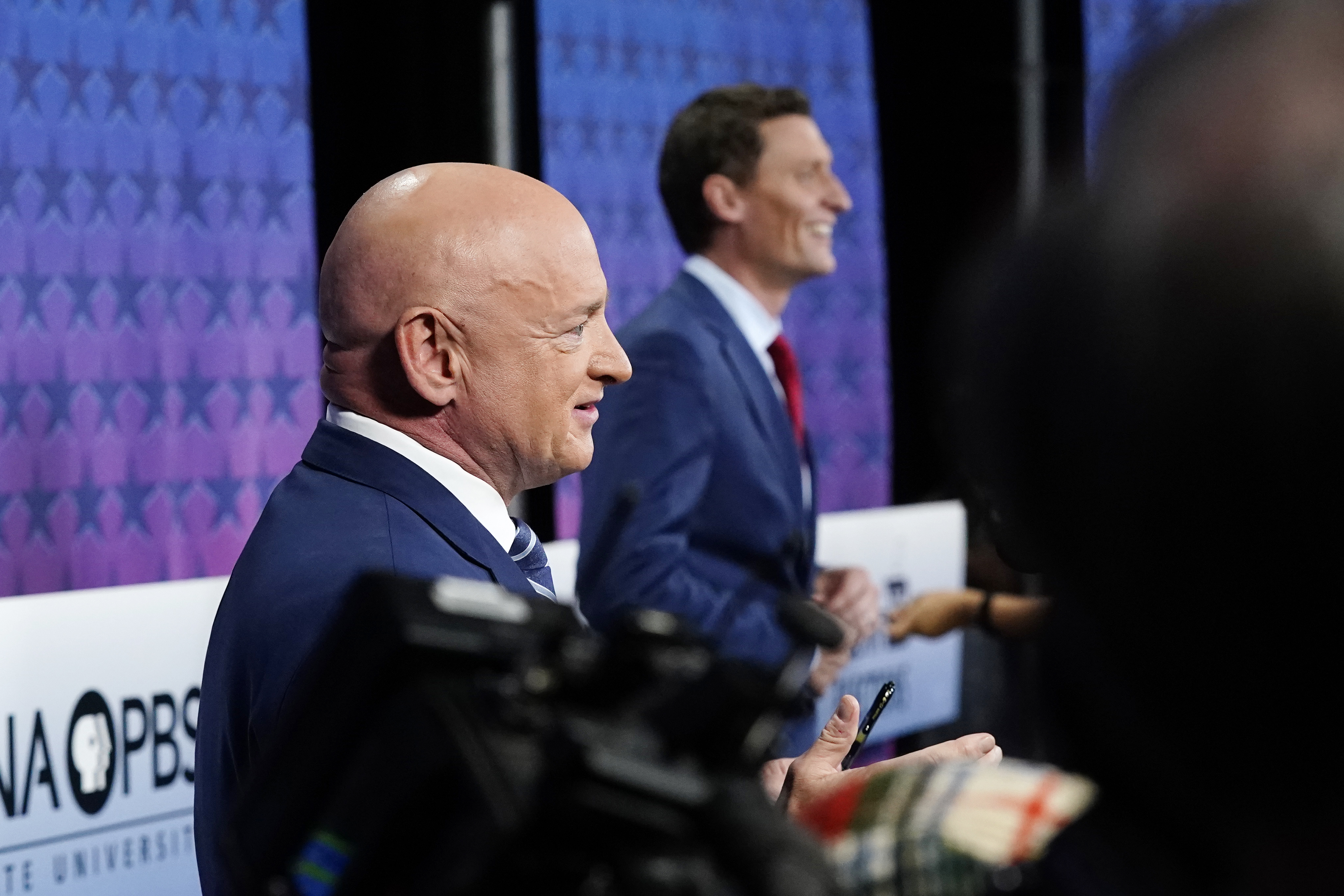 BREAKING — “Trump ally Tom Barrack acquitted of foreign agent charges,” by AP’s Tom Hays: “DONALD TRUMP’s inaugural committee chair, TOM BARRACK, was acquitted of all counts Friday at a federal trial in which he was accused of using his personal access to the former president to secretly promote the interests of the United Arab Emirates.”

IS THIS THE RED WAVE? — “A total lunar eclipse will turn the moon blood red on Election Day,” by WaPo’s Amudalat Ajasa: “The entire moon will illuminate coppery-red from 5:17 a.m. until 6:42 a.m. Eastern time.” Just in time for polls opening!

CHANGING OF THE GUARD — The Capitol Police force was already facing intense scrutiny in the wake of the Jan. 6 Capitol attack, and now it’s under even more pressure, our colleagues Nicholas Wu and Katherine Tully-McManus report, following the brutal attack on Speaker NANCY PELOSI’s husband, PAUL, at their San Francisco home.

“Members of Congress are seeking more transparency and a broader discussion of how to protect lawmakers’ families,” Nick and KTM write. “One top Democrat is even calling out the department’s secretive division dedicated to protecting congressional leaders. As the Capitol Police weighs an ask to grow a budget that’s almost the size of San Antonio’s force, the lawmakers it’s asked to protect are openly unsure that extra cash will make members functionally safer.”

FIRST IN PLAYBOOK — We got our hands on some exclusive polling in two of the hottest states — Arizona and Nevada — from former Trump hand DAVID BOSSIE’s Citizens United, in collaboration with KELLYANNE CONWAY’s polling operation. The topline takeaway is that the Democratic Senate incumbents in each state are in jump-ball races. Here’s the details:

For the record: All of the matchups mentioned above fall well within the polls’ margins of error of plus-or-minus 4.4%. Each poll surveyed 501 registered likely voters in the respective states from Nov. 2-3. Each matchup also carries a significant number of undecided voters (ranging from 5% in the Arizona Senate race to 13% in the Arizona gubernatorial race).

ANTISEMITISM ABOUNDS — “Between Kanye and the Midterms, the Unsettling Stream of Antisemitism,” by NYT’s Michael Paulson and Ruth Graham: “Antisemitism is one of the longest-standing forms of prejudice, and those who monitor it say it is now on the rise in America. The number of reported incidents has been increasing.”

WEEKEND READ — “Clock runs out on efforts to make daylight saving time permanent,” by WaPo’s Dan Diamond: “A bill to permanently ‘spring forward’ has been stalled in Congress for more than seven months, as lawmakers trade jabs over whether the Senate should have passed the legislation at all. House officials say they’ve been deluged by voters with split opinions and warnings from sleep specialists who insist that adopting permanent standard time instead would be healthier, and congressional leaders admit they just don’t know what to do.”

See also  Can the midterms save care policies?- POLITICO

A message from Amazon:

While Ariel completed the Mechatronics and Robotics Apprenticeship, she was still paid by Amazon, so she could build a career she was passionate about without worrying about making ends meet. “The program gave me the opportunity to build a career from the ground up,” she told colleagues.

Hundreds of thousands of hourly employees can use Amazon’s free skills training programs to build their careers.

HOW IT’S PLAYING — “At Campaign’s End, Democrats See Limits of Focus on Abortion,” by NYT’s Lisa Lerer and Elizabeth Dias: “Strategists and pollsters say voters remain uncertain about the tangle of state laws that have replaced federal protections and about candidates’ positions — one sign that Republicans, who were caught flat-footed by the victory they spent decades working to achieve, may have successfully muddied the waters about their positions.”

THE DEMOGRAPHIC DIVIDE — “In Milwaukee, city and suburban voters are at partisan odds over crime,” by WaPo’s Cara McGoogan

IN REAL LIFE — “‘We’re Afraid’: Town That Inspired Debunked Voter Fraud Film Braces for Election Day,” by NYT’s Jack Healy and Alexandra Berzon: “San Luis, Ariz., a small farming outpost on the border, played a key role in the making of the movie ‘2,000 Mules.’ Now some residents are scared to vote.”

WAY DOWN-BALLOT — “Midterm voters to take on Colorado’s soaring housing costs,” by AP’s Jesse Bedayn in Denver: “Bloated housing prices in the past few years have crept into every corner of Colorado. … Fed-up Coloradans have taken the crisis into their own hands and will vote Tuesday on a host of local and statewide ballot measures intended to rein in the soaring cost of housing.”

BATTLE FOR THE SENATE

RACING TO THE FINISH — The Cook Political Report released its final Senate overview today, changing its “most likely outcomes” to D+0 and R+3 and moving the Wisconsin race between GOP Sen. RON JOHNSON and Democrat MANDELA BARNES from toss-up to lean Republican. Read the writeup by Jessica Taylor

BATTLE FOR THE STATES

ON WISCONSIN — “Wisconsin Republicans Stand on the Verge of Total, Veto-Proof Power,” by NYT’s Reid Epstein in Franks Field, Wis.: “If Wisconsin Democrats lose several low-budget state legislative contests here on Tuesday — which appears increasingly likely because of new and even more gerrymandered political maps — it may not matter who wins the $114 million tossup contest for governor between Gov. TONY EVERS, a Democrat, and TIM MICHELS, a Republican. Those northern seats would put Republicans in reach of veto-proof supermajorities that would render a Democratic governor functionally irrelevant.”

— New York: Democratic Gov. KATHY HOCHUL leads Republican Rep. LEE ZELDIN in the gubernatorial race, 48% to 45%, per a new Spectrum News/Siena College poll. (This race was 47% to 44% in favor of Zeldin in September.)

— Georgia: “I don’t consider myself a senator who used to be a pastor,” Democratic Sen. RAPHAEL WARNOCKsays in a new closing-argument ad. “I’m a pastor who serves in the Senate.”

— New Hampshire:The latest ad from the STEVE WYNN-financed Our American Century seeks to hitch GOP Senate nominee DON BOLDUC to Republican Gov. CHRIS SUNUNU’s coattails, featuring a clip of Sununu on a recent episode of “Meet the Press” saying he supports Bolduc, whom he opposed before the Republican primary in September.

DON’T CALL IT A COMEBACK — We now have a date to circle for when former President DONALD TRUMP might officially mount his 2024 reelection campaign: Nov. 14. Axios’ Jonathan Swan reports that Trump’s team is eyeing that Monday for the relaunch, “with the official announcement possibly followed by a multi-day series of political events.” As with anything Trump is involved with, this is of course subject to change, but Swan notes that Trump’s aides are starting to look at travel plans around the date.

JAN. 6 AND ITS AFTERMATH

MEGATREND — “The Housing Market Is Worse Than You Think,” by NYT’s Stefanos Chen

THE REAL-WORLD IMPACT — “Abortion clinic that opened days after Roe fell is inundated,” by AP’s Heather Hollingsworth in Kansas City, Kan.: “This clinic and other Planned Parenthood centers in Kansas have been doing their best to help by lengthening hours, hiring staff and flying in physicians. Still, they have only been able to take about 10% to 15% of the patients seeking abortions.”

WE VALUE YOUR OPINION: Please take a quick, three question survey and tell us what you think about one of our advertising partners.

ON YOUR FYP — “Worries Grow That TikTok Is New Home for Manipulated Video and Photos,” by NYT’s Tiffany Hsu: “Edited or synthesized material also appears on other online platforms, such as Facebook, which has nearly three billion monthly active users. But experts said it was especially difficult to catch on TikTok, which encourages its estimated 1.6 billion active users to put their own stamp on someone else’s content, and where reality, satire and outright deceit sometimes blend together in the fast-moving and occasionally livestreamed video feed.”

What it looks like: “In recent weeks, TikTok users have shared a fake screenshot of a nonexistent CNN story claiming that climate change is seasonal. One video was edited to imply that the White House press secretary, KARINE JEAN-PIERRE, ignored a question from the Fox News reporter PETER DOOCY. Another video, from 2021, resurfaced this fall with the audio altered so that Vice President KAMALA HARRIS seemed to say virtually all people hospitalized with Covid-19 were vaccinated. (She had said ‘unvaccinated.’)”

AMERICA AND THE WORLD

FOR YOUR RADAR — “Iran is seeking Russia’s help to bolster its nuclear weapons program, U.S. intel officials believe,” by CNN’s Natasha Bertrand: “The intelligence suggests that Iran has been asking Russia for help acquiring additional nuclear materials and with nuclear fuel fabrication, sources briefed on the matter said. The fuel could help Iran power its nuclear reactors and could potentially further shorten Iran’s so-called “breakout time” to create a nuclear weapon. Experts emphasized to CNN, however, that the nuclear proliferation risk varies depending on which reactor the fuel is used for.”

CLIMATE FILES — “As Other Global Crises Collide, Nations Converge to Address Climate Change,” by NYT’s Lisa Friedman: “World leaders will gather in Egypt next week to confront climate change at a moment of colliding crises: a war in Europe that has upended energy markets, rising global inflation, deep political divisions in many countries and tension between the world’s two greatest polluters, China and the United States. The conditions don’t bode well for a mission that demands cooperation among nations to bring down the pollution from burning oil, gas and coal that is warming the planet.”

CUT FOR TIME — “MSNBC Cuts Ties Unexpectedly With Weekend Host Tiffany Cross,” by Variety’s Brian Steinberg: “Her production staff was informed of the decision Friday morning, according to three people familiar with the matter. MSNBC declined to make executives available for comment, and Cross could not be reached for immediate comment. MSNBC decided not to renew Cross’ contract after two years, according to one of these people, and severed ties with her immediately. A rotating group of anchors will lead her weekend hours until a replacement is found.”

TRANSITION — Andy Morimoto is now director of climate policy at Edelman Global Advisory. He most recently was director of research at the Paulson Institute.

ENGAGED — Marshall Kosloff, co-host of “The Realignment” podcast and media fellow at the Hudson Institute, and Olivia Webb, editorial lead at a16z Bio+Health, recently got engaged in Austin, Texas. The couple met as roommates at their group house in Woodley Park in 2017 and have been dating ever since. Pic … Another pic

WEDDING — Steph Reichin, executive VP and chief of staff at SKDK, and Cooper Liska-Smith, senior design manager at Sorare, got married last weekend at Castle Hill Inn in Newport, R.I. The two met in 2019 and live in Brooklyn. Pic

WELCOME TO THE WORLD — Natalie Pahz, a comms director for CBS News’ “60 Minutes” and a CNN and Washington Post alum, and Keyvon Pahz, a consultant for Factset, on Tuesday welcomed Fritz Andersen Pahz, who came in at 5 lbs and 15 ounces. Pic … Another pic

Ruben Randall - October 19, 2022 0
Money
Brendan Fraser has returned to acting and fans are hoping they would see The Mummy 4. With the actor having a long list...

The View fans think the new co-host search has been narrowed...