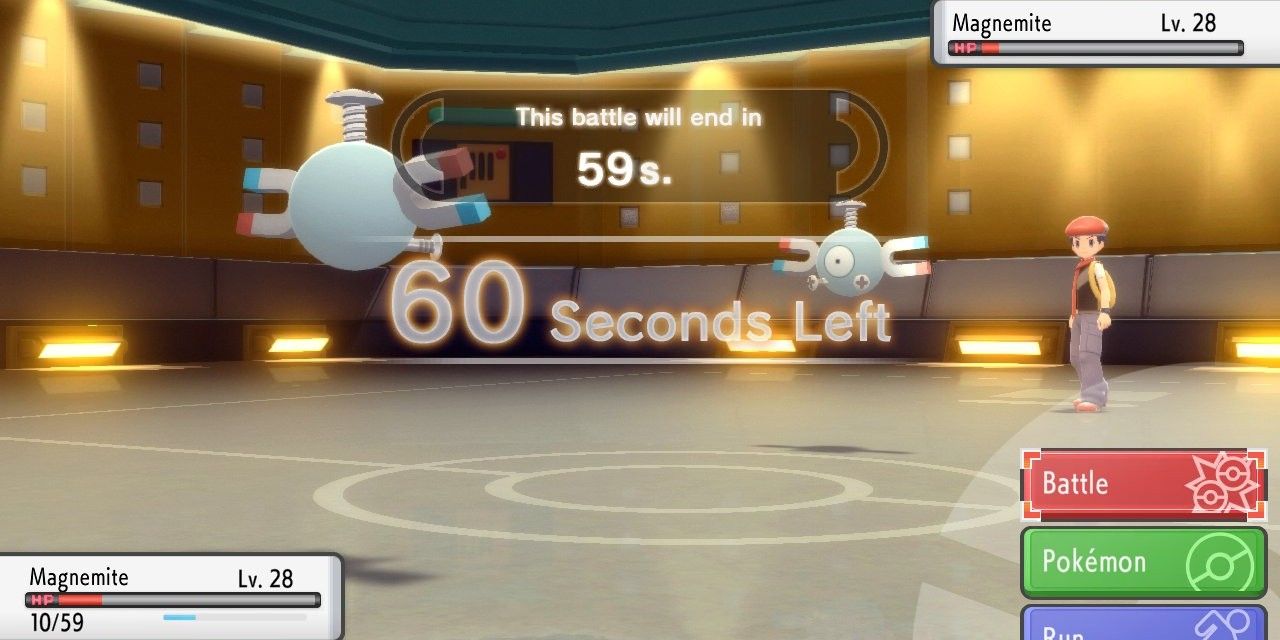 While the general sentiment surrounding Pokémon Brilliant Diamond & Shining Pearl continues to improve, the games have kept the hugely problematic 20-minute online battle timer from the previous games. While Pokémon Sword and Shield will remain the series’ official platform for the World Championships, players will still be playing online with each other in the BDSP Sinnoh remakes and the current timer will continue to be a problem.

Competitive battling has been an increasingly more important staple of the Pokémon community since the release of Pokémon Diamond & Pearl in 2007. Competitive Pokémon started out as a fairly straightforward 6 vs. 6 singles format in which players mastered the game’s hidden mechanics to maximize the potential of their teams. But as time has gone on and the series has embraced this part of the community through the official VGC doubles format, the games have streamlined these mechanics to make it easier for players to jump right into competitive play. And while it’s never been easier for players to start playing Pokémon competitively, one abrupt change to online battles has completely undermined this part of the game.

With Pokémon Sword and Shield came the introduction of a 20-minute battle timer and it has returned in Pokémon BDSP, according to Twitter user KazoWAR. In the original Pokémon Diamond & Pearl, battle timers didn’t even exist in online battles and it wasn’t until later on that a 60-minute timer was introduced. This was a necessary change as it put a limit on battles which ultimately devolved into long stall wars where nothing really happened. However, this timer was reduced to 20 minutes and it instantaneously killed the 6 vs. 6 singles format while putting a serious dent into competitive battling as a whole. It’s just not nearly enough time to finish a complete battle, which oftentimes can take upwards of 45 minutes to finish.

Last year, Pokémon YouTuber Pokeaim brought together a group of popular members of the competitive battling community to discuss the issues with the 20-minute battle timer.  Like many other games and series, Pokémon has a large community surrounding content creation and while nuzlocke-type playthroughs are extremely popular, competitive battling has always been a driving force in these communities. The 20-minute battle timer has done so much damage to competitive play that in spite of how easy it is to build a competitive team, it has made it more enticing for players to continue battling on Pokémon Showdown, an online battling simulator, than to play on the actual Nintendo Switch titles.

The video for Pokeaim can be found above or here.

A popular competitive format known as draft league featured groups of Pokémon YouTubers who came together and drafted completely unique teams of Pokémon before battling each other in a massive tournament to determine the champion. This was an extremely interesting form of content where skilled players were forced to devise unique and unconventional strategies on a weekly basis to defeat their opponents and it was very entertaining to watch, to the point where many players conducted their own individual draft leagues with friends or others in the community to play it for themselves. But because the 20-minute timer has made it nearly impossible to finish a competitive Pokémon battle, this entire format has been erased, and it looks like it will continue to be a problem in Pokémon BDSP.

The 20-minute battle timer is something that absolutely has to be changed. Whether it’s something like the old 60-minute timer or some sort of chess-style timer that doesn’t continue during animations, the creative team behind Pokémon needs to address this situation for competitive gameplay. As long as the 20-minute timer remains in online play in its current form, the competitive potential of Pokémon Brilliant Diamond & Shining Pearl will be stifled.


Chris is a freelance contributor to Screen Rant with a Master’s degree from the University of Massachusetts Lowell. Writing emerged as a medium for Chris to express his passion for video games and has lead him here. Chris can be found on Twitter, Twitch, YouTube, Instagram and practically anywhere else @Sixchr.