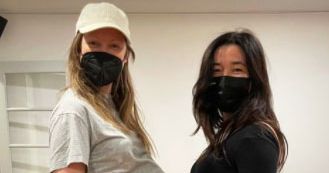 As if they weren’t already, Anna Konkle and Maya Erskine are living the lives middle-school best friends dream about. Not just on their Hulu show, PEN15, where they inhabit their awkward eighth-grade selves, but in real life, too. They gave birth to an award-winning TV show together and now they’re both actually pregnant at the same time. Next to a double wedding, it’s every best-friend duo’s dream. Erskine posted several photos of them and their matching bumps on her Instagram Story on Thursday. Konkle is actually further along than Erskine, despite the fact that she’s just now announcing her pregnancy with boyfriend Alex Anfanger (the man behind the lips she kisses on the show). “It only took me nine months to post but the family is expanding any second now,” she wrote on Instagram on Thursday. Erskine announced her pregnancy, with Sky High’s Michael Angarano back in November. (Fine, he was also totally in season two of PEN15, but Sky High is iconic.) They also announced their engagement at the time. Feels like it was just last year we were watching Anna and Maya struggle with boys, get their first periods, and try out for the middle-school play. That’s because it was.