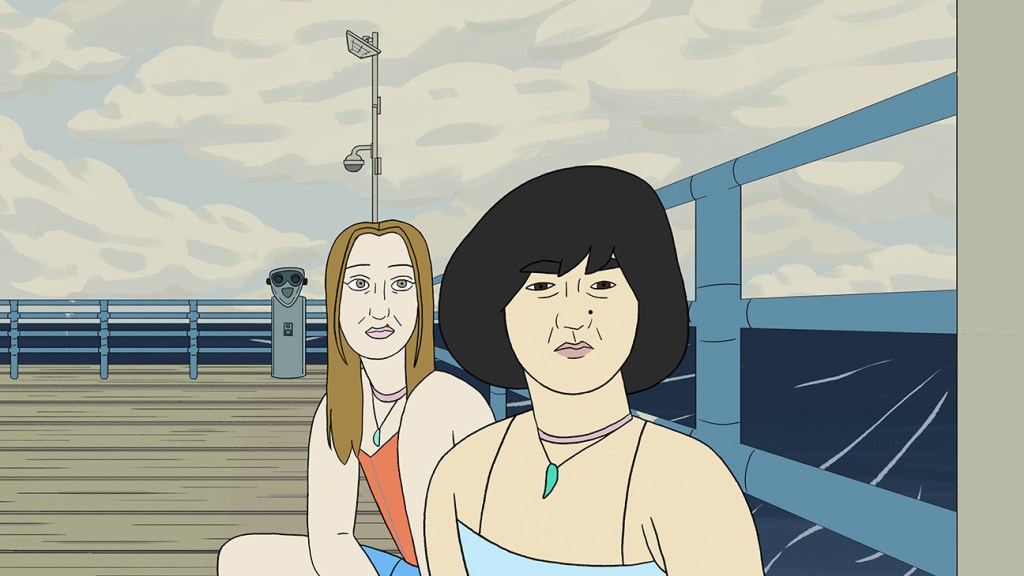 Hulu “traumedy” PEN15 is already in the business of stretching the imagination, thanks in part to its grown creators and stars Maya Erskine and Anna Konkle, who perfectly encapsulate two awkward, angsty middle-schoolers during 2000.

That’s part of what makes the show — which is celebrated by critics for its hilarious depiction of the cringey horrors of young adolescence — ready-made for the fluidity, fantasy and sometimes even bizarreness that is animation as a medium. And that’s exactly why the show’s Season 2 special, “Jacuzzi,” though spurred in part by pandemic production complications, is an exciting new turn for the Hulu hit.

Written and directed by Konkle, the Aug. 27 episode sees Anna (Konkle) and Maya (Erskine) vacationing with Anna’s dad, Curtis (Taylor Nichols) in Florida, an experience that introduces them to new insecurities as a mystical turn with a caricature artist exaggerates their features and their self-doubt. To help animate their emotionally complicated vacation, PEN15 turned to Starburns Industries, the full-service production company co-founded by Dan Harmon, Dino Stamatopoulos, Joe Russo II, James Fino and Duke Johnson in the summer of 2010 to produce Community‘s animated holiday special. Specializing in stop-motion, traditional 2D, CG animation and live-action production, the studio is behind animated hits like Rick & Morty, Mary Shelley’s Frankenhole and the Academy Award-nominated animated film Anomalisa.

Ahead of the episode’s debut, The Hollywood Reporter spoke with PEN15 co-creator, star and writer Maya Erskine not just about how the episode came together with the help of Starburns during the pandemic (and during her pregnancy) but also about learning the ropes of animation production and the ’90s influences that the team drew from.

This was produced during the pandemic, but it’s animated and that isn’t something you can do in the same time frame as live-action. So when did the idea for this episode get put on the table?

We kind of flirted with the idea when we were first writing it just because when we’re writing, we’re always kind of considering what the limitations are in terms of shooting, the schedule and all of these things. We decided to do live-action, and when the pandemic happened, we were like a week away from shooting that whole episode, and our line producer had said to us, “Yeah, I’m glad that never happened because those would have been 20-hour days. Like I don’t know how that would have actually happened.” I don’t think it would have. In a way, it was a saving grace, and while we were editing the first part of season 2a during the pandemic, we sort of [wondered] do we hold off and try to film it later? When would that be? We were asking all these questions, so we revisited the animation topic and, and just proceeded on when we were finishing up editing.

We ended up going with also Starburns, who had helped make the vaginas in the first part of the season at the end of the wrestling episode. They’re incredible.

I feel like PEN15 tonally lends itself to animation, but were there specific elements of this episode that you were like, “You know what, maybe this should be the thing that we animate.” Or was it more just making the choice at that moment based on where you were production-wise in the pandemic?

It was a couple of things. Because we had flirted with it before — because it was a special — we were like, it could be anything. I think at one point we were like, “Oh, stop-motion would be amazing,” but that takes really long and was expensive, and all these other things. So animation felt great as we were doing it. It sort of surprised me, I would say, as we were making it, like “Oh wow, this actually is really perfect for animation and I’m really glad that we went this route.” There’s something a little fantasy about this episode. It’s this vacation that you take with your parents that you get really excited about and then it ends up being boring, and how you can’t go in the water and do anything. And then you meet a boy, and all of a sudden, like, everything changes. And because they have this sort of supernatural experience — or not really but they get their caricatures drawn — all of a sudden, their insecurities become their new faces and their new heads. It was like this just seems to scream animation. If we’re going to do it at all, this is the episode. So yeah creatively, pandemic-wise it all kind of just fell into our lap perfectly.

You shared that you worked with Starburns, but were there any series or animation styles that you loved and felt like you wanted to feature with this episode?

We actually in the beginning sort of put together this file of all the animations we loved when we were in middle school at that time. Like, remember Nickelodeon and, you know, Ren & Stimpy, Doug, Real Monsters, Beavis and Butthead — just all of those animations that we watched as kids? There was something about it that was in the back of our head, which [this episode] isn’t matching that but it’s where we started in terms of like dream animation. It was really calling back to that time where the show takes place and when we grew up. And those animations were a little odd, and dark sometimes, and kind of took on this quirky tone that we felt matched up well with PEN15.

Another reason why we went with Starburns is because they made Anomalisa — it’s stop-motion animation and that was something we felt really passionate about. We loved how real it was and just so beautiful. [Studio Ghibli’s Hayao] Miyazaki we used as references, even though it’s not quite that. We kind of wanted to bring the things that we love about all of those animations into the budget of the world — what we could afford to do and that felt right for PEN15. Ideally, you’re watching it and feeling like I’m still watching the show, it’s not like this new show all of a sudden. I’m still seeing Maya and Anna, but animated. So keeping it as grounded as possible and real. We even animated all the other characters to look like the actors portraying those voices.

I’m curious to know if there was anything you were really excited to animate? In live-action, there might be some visual restrictions to what you can do, but animation can let you go a little farther — be anywhere, do anything.

I think the most exciting part was the exaggerated insecurity because that was like the world is our oyster. How far do we go? How long do we go with it? How big can we make my face without it being distracting? So, you know, playing with our insecurities was the most exciting, and that was gonna be the most exciting part of live-action also but there would have been more restrictions. Also being able to really feel like we’re in Florida. I don’t know how well we could have pulled that off. I mean, I’m sure we could have but just with what was in the plan.

Animated Anna (Anna Konkle) and Maya (Maya Erskine) on their trip to Florida.
Courtesy of Hulu

I don’t want to call animation bureaucratic, but it’s definitely streamlined and sequestered in terms of the processes. There are certain things you have to do before you can do other things and that can create some challenges. How were your writers and animators and voice actors working and communicating on this?

So that was an interesting part of this for us to learn. We’re completely green to this, and to learn that you have to edit everything and lock everything before it goes off to be animated at a different house, different companies that we didn’t even know about — and we’re like, “Oh, we can’t make any last-minute changes.” I mean, for us, editing is the place where we get to as many things as we need to if it doesn’t work. So it was being like, “OK, we’re committing to this and it’s got to be what it is” and then that’s it all you can make, except maybe changes to ADR and voice, but that’s it. Anna was the director of this episode, and we both were also pregnant at the same time, then I was on maternity leave and she was finishing this up. Angela Stemple, who was from Starburns, was basically working with the animation house to translate everything that we had come up with all together from the storyboards and the animatics to then being animated — it’s just so massive and wild and such an insane process.

Also, knowing the limits of moves. You can’t blink as much or you can’t do these things, or if you have this many lines, it makes it way more tedious to draw and it’s actually going to take a year longer. Learning about these other restrictions — it’s such a wild process but really, really fun being able to just go from the animatics but then kind of letting go once they start animating. The fear for me was like, I really wanted them to animate us as much as possible the way we move. Anna and I have such specific movements — how we hold on to each other, how we gasp — that I wanted at least the essence to be able to come through and I thought they did such an incredible job.

You also had the additional job of doing voice work for this special. Did you do the voice work first and what was that experience like?

Yeah, we did the voice first, so in terms of when the animation house was animating it, they had that full teleplay to listen to and before that there was also an animatic, which was taken from the storyboard and on to like this sort of rudimentary kind of animation to the voices. But I would say that was one of the most fun elements of it because it was really just me and Anna, being in our isolated booths but being able to play off of each other. That was a thrill. We just get to be silly together. That was a little bit less pressure because we just got to sit and mess around with each other.

In light of your experience on this episode, have you considered pursuing animation in the show past this special or is it a little too time-consuming for your production schedule?

You know, I would never say never. For me, I probably would pursue it. I think I would be interested also in how animation can mix with live-action. That’s always something that’s interested me, the hybrid of things. I remember Who Framed Roger Rabbit? when I was growing up — like those are some of my favorite movies, and I love the mix of the two, so there’s always something like that in my head for the future.

Are there any Easter eggs or visual tributes to that ’90s animation you mentioned that fans might pick up on?

I mean, I wouldn’t say there’s a tribute to ’90s animation. We definitely reference the Ren & Stimpy butt dance a lot. That was really hard to put into our show. I wouldn’t say any reference off the top of my head to a ’90s animation or throwback, but there’s definitely items in this episode that you’ll see as ’90s kid that you’ll be like, “Oh yeah!” But that’s just kind of our show. (Laughs.)

This interview has been edited and condensed for clarity.

Ruben Randall - June 19, 2022 0
Money
Beyoncé has announced her return to music, with the superstar revealing that she's set to release a new album, Renaissance, in the near future....