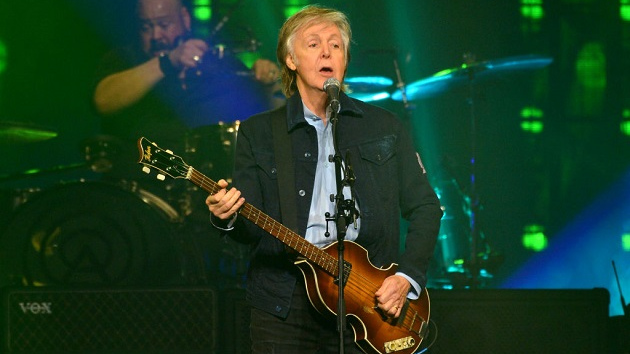 The latest edition of U.K. newspaper The Sunday Times’ annual Rich List has just been unveiled and, as usual, Paul McCartney is ranked among the wealthiest musicians in his homeland and Ireland.

The former Beatles legend — whose wealth includes the fortune of his wife, American trucking heiress Nancy Shevell — remains at the top of the tally, with a net worth of about $1.1 billion. That’s an increase of about $56 million from the couple’s 2021 total.

In second place for a second straight year are Irish rock greats U2 with a collective net worth of $780 million. Elton John remains in fourth place with about $493 million.

Making the biggest jump in the top-10 rankings is ex-Police frontman Sting, who moves from a tie for ninth place in 2021 into the #5 spot, with about $400 million.

Rolling Stones frontman Mick Jagger is #6 on the tally with $397 million, while his bandmate and songwriting partner Keith Richards is #7 with $378 million.

At #8 are late Beatles guitarist George Harrison‘s widow and son, Olivia and Dhani Harrison, with a net worth of $368 million, while ex-Fab Four drummer Ringo Starr follows at #9 with $356 million.

Other veteran artists further down on the list include Queen guitarist Brian May at #12, Rod Stewart at #13, ex-Pink Floyd singer/bassist Roger Waters at #14, Queen drummer Roger Taylor at #16, Eric Clapton at #17 and 1960s pop idol Tom Jones at #19. Late Rolling Stones drummer Charlie Watts‘ widow, Shirley, and their family are #20 on the tally.

See also  'The Flash' Season 9 Release Date, Cast, And Plot - Everything We Know

The James Harden/Ben Simmons trade has been a failure for both the Brooklyn Nets...

Ruben Randall - March 25, 2022 0
TV/Movies
His family confirmed his death and said he had vascular dementia.Mr. Korty was a key figure in the independent cinema movement that took hold...