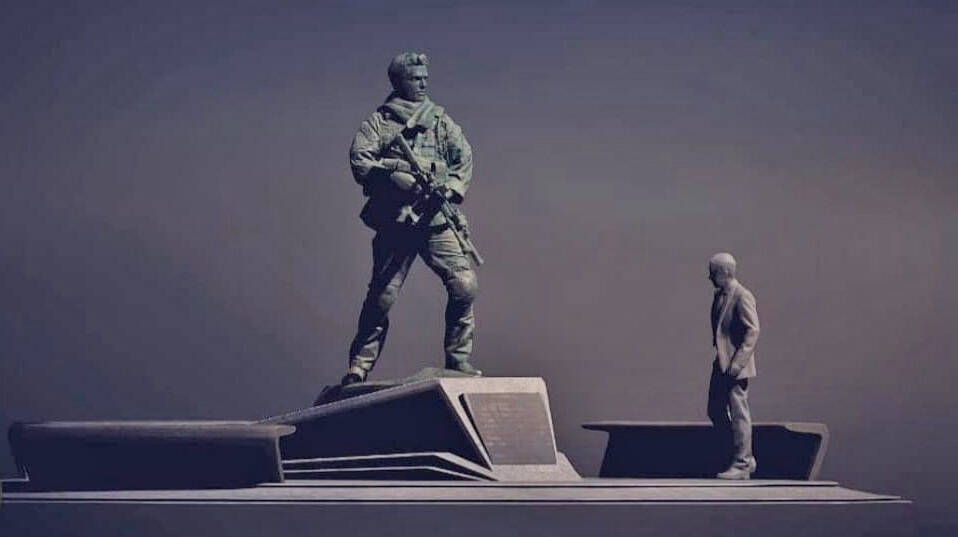 The Shane Patton Foundation has almost completed its goal of erecting a statue of its namesake in the city and is asking for the community’s help to see it come to fruition.

“We feel it’s the best way to honor him,” said Joel Pepper, a foundation founder. “We were all friends of Shane. The statue can be a place where people can go, reflect and learn about him if they didn’t know him. … We want people to look at it, feel self-pride and pride for country. We want it to be uplifting and motivating.”

Pepper said the foundation has been raising money for the statue for about five years through its Shane Patton Pub Crawl T-shirt sales, proceeds from the pub crawl and other fundraisers. Recently, it received a substantial donation from Victor DiCosola, owner of Tactical Night Vision Company, that allowed them to move forward.

Pepper said they are working with an artist in Poland, who will sculpt and cast the statue. When it’s finished, they want it to be placed in the center of Wilbur Square Park, 200 Park St., below the steps near where the sidewalk forks.

The foundation will be presenting this request to City Council at its Tuesday, April 26, meeting.

“We really would like people to wear their Shane Patton shirts and come to the meeting to show their support for the location,” said Pepper. “Everyone who has bought a shirt and contributed has helped to get this done.”

Patton grew up in Boulder City and was one of 11 Navy SEALS and eight U.S. Army Special Operations aviators killed June 28, 2005, during Operation Red Wings in Afghanistan. The story of the battle was told in the book “Lone Survivor: The Eyewitness Account of Operation Red Wings and the Lost Heroes of SEAL Team 10,” by survivor Marcus Luttrell, and its subsequent movie, “Lone Survivor,” starring Mark Wahlberg.

“It will be a minimal impact to the park in terms of taking up space. … It (the park) seems to be the center hub for everything,” said Pepper. “We think the statue will be showcased well there.”

“Shane’s likeness is perfectly captured,” said Grant Turner, fellow foundation member. “The pedestal creates the illusion that Shane is driving forward in an ascending manner, and the benches, which pay tribute to the other fallen soldiers who died during the mission, appear to be waves formed in Shane’s wake.”

Turner said this statue is about more than just keeping Patton’s memory alive.

“I was fortunate enough to see first-hand the incredible work ethic, sacrifice and resilience required for Shane to make it through the grueling process of becoming a Navy SEAL,” he said. “He put his life on the line to save his fellow soldiers and to preserve the American way of life. Shane inspired me to follow to my dreams, and I’m hopeful the … memorial statue will inspire generations of Americans to come.”

The foundation is hoping to have the statue completed this year and installed at the beginning of 2023.

The City Council meeting starts at 5 p.m. in council chambers at City Hall, 401 California Ave. It is open to the public. The foundation plans to reveal the name of the artist during the meeting.

Want a job? You’ll have to convince our AI bot first

Ruben Randall - January 19, 2023 0
Celebrity
Ever carefully crafted a job application for a role you're certain that you're perfect for, only to never hear back? There's a good...