The Ebell of Los Angeles was the scene of the 16th annual awards last night, having moved there to allow for larger space and social distancing.

Having received the ‘Honorary Irishman’ at the 2010 awards, Star Wars director JJ Abrams returned to this year’s event as emcee. Other stars presenting on the night include Hollywood veteran Mary Steenburgen, Reinaldo Marcus Green and Richard Curtis.

McKay received his Oscar Wilde Award from Steenburgen, having received four Oscar nominations for for his Netflix film Don’t Look Up.

“The fact that somebody can be so outrageously funny, and still have the heart and the passion to make films about the environment, about hypocrisy, who shine the light on the injustices in the world the fact that all of these things are in this’s man’s absolutely brilliant career makes him a rare, and Irish, and loud and sometimes obscene bird,” Steenburgen said.

McKay spoke of his family ancestry from Northern Ireland and Donegal and how a mold that infected the peat caused them to move to Nebraska. He now has a home in Ireland and noted the irony in the fact that all his family want to visit him in the place from which their ancestors fled.

He noted how much Ireland has changed for the better since his ancestors left:

“I just love the Irish people. I’m going back there soon to write another script.”

“His Irish roots are everything to him, his home country, and what he stands for and the projects he’s a part of, is a testament to who he is as a person. He is an incredible artist and an incredible talent.”

In accepting is award, Ó Héalai, talked about how he almost gave up acting, and when he stopped chasing his dream, he was sent the script for Arracht, the first ever Irish language film to portray the Famine and how he felt that while shooting that film.

“The dignity of our ancestors was with us the entire shoot,” he said, noting that the film changed his life.

Writer of classic romantic comedies such as Notting Hill and Love Actually Richard Curtis present Jamie Dornan with his award, and joked that Dornan couldn’t possibly be a nice person because “in my experience, good looking people normally haven’t got much to recommend them.”

Dornan spoke about how he had been asked a few times before to receive the award, but how he felt that he hadn’t enough good work.

“Fourteen years ago, I saw some unbelievably worthy work when they used to show a reel, and I thought one day,” he said.

But this year, he was disappointed because, “they didn’t do a f-ing reel.” He then joked that he would instead have to act out his entire career for the audience, and pulled out a set of handcuffs, saying “I’ll start with something you’re familiar with.”

Dornan said working on Belfast was “the greatest honour of my career.” He also said he would “endeavour to tell stories from that complicated island as long as I’m allowed to” and “that if you’re lucky enough to be Irish, then you are lucky enough.” 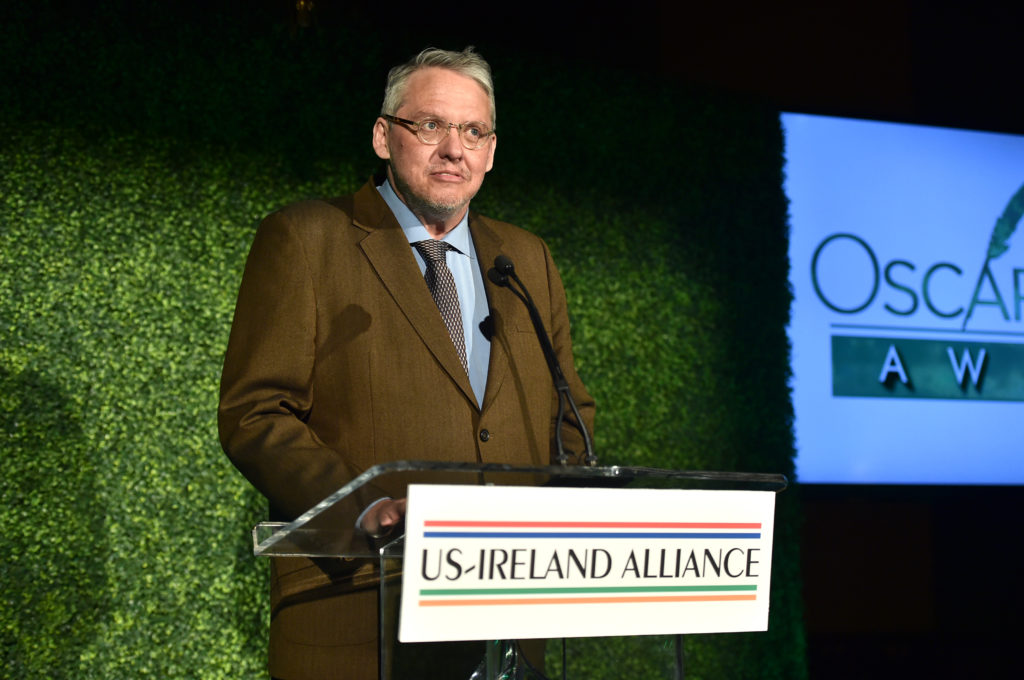 With Kenneth Branagh unable to attend the ceremony due to testing positive for Covid-19, a taped acceptance speech was played to those in attendance, which included his wife Lindsay Brunnock and several of his family and friends.

In honouring Branagh, JJ Abrams said he hoped the film would “remind everyone, particularly political leaders in London and Stormont, to deliver on the promise of the Good Friday Agreement so that any further immigration form Northern Ireland is a choice and not a necessity.”

Branagh recalled what great fun the Oscar Wilde Awards are, having attended in 2012 to present to writer John Logan. In speaking about Belfast, he said there were only a few ways this 9-year-old boy “could see some light through the dark cloud that was the onset of the Troubles.”

One light that was that of “the super bright light coming from the projection booth” at the local cinema that “threw out all those beams of dreams all the way from Hollywood.”

“Another was the light in the eyes of those incredible wise warrior women, amazingly embodied by Caitríona Balfe in our film, who would step in front of any obstacles rather than see their family harmed,” he said. “And, finally, the light that was the songs, the dances, the music, and the jokes. In short, the humanity, and the humor, that is part of the spirit of the Irish people.”

Lead sponsor of this year’s event was Hackman Capital Partners and The MBS Group. Founder and Chairman Michael Hackman owns numerous studios and recently acquired Irish studios, Troy and Ardmore, and is building a new studio in Greystones. Abrams announced from the stage that Hackman generously just committed to sponsoring two of the US-Ireland Alliance’s Mitchell Scholarships, with a gift of $100,000. 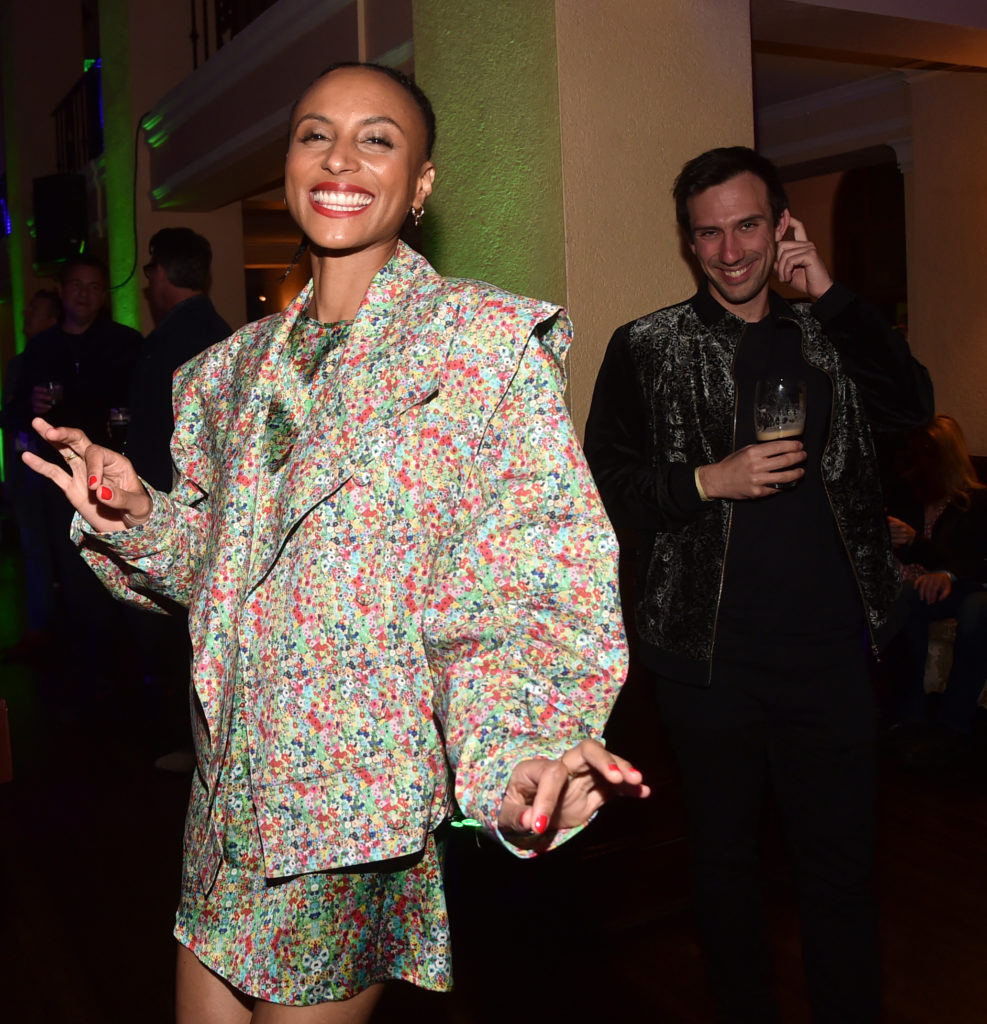 There were many Irish in attendance including actress and former ‘Wilde Card’ honoree, Sarah Bolger; Benjamin Cleary & Rebecca Bourke, the director and producer SWAN SONG; director Kate Dolan; actor Glenn Keough; singer and actress Samantha Mumba; actress Nora-Jane Noone; Fig O’Reilly, former Miss Ireland, and correspondent on CBS’ Mission Possible; and Eimear Noone, the first female conductor of the orchestra at the Academy Awards in 2020.

Ruben Randall - February 27, 2022 0
Money
In the days following Bob Saget’s death at 65, a slew of famous names have paid tribute and share stories about the late actor....