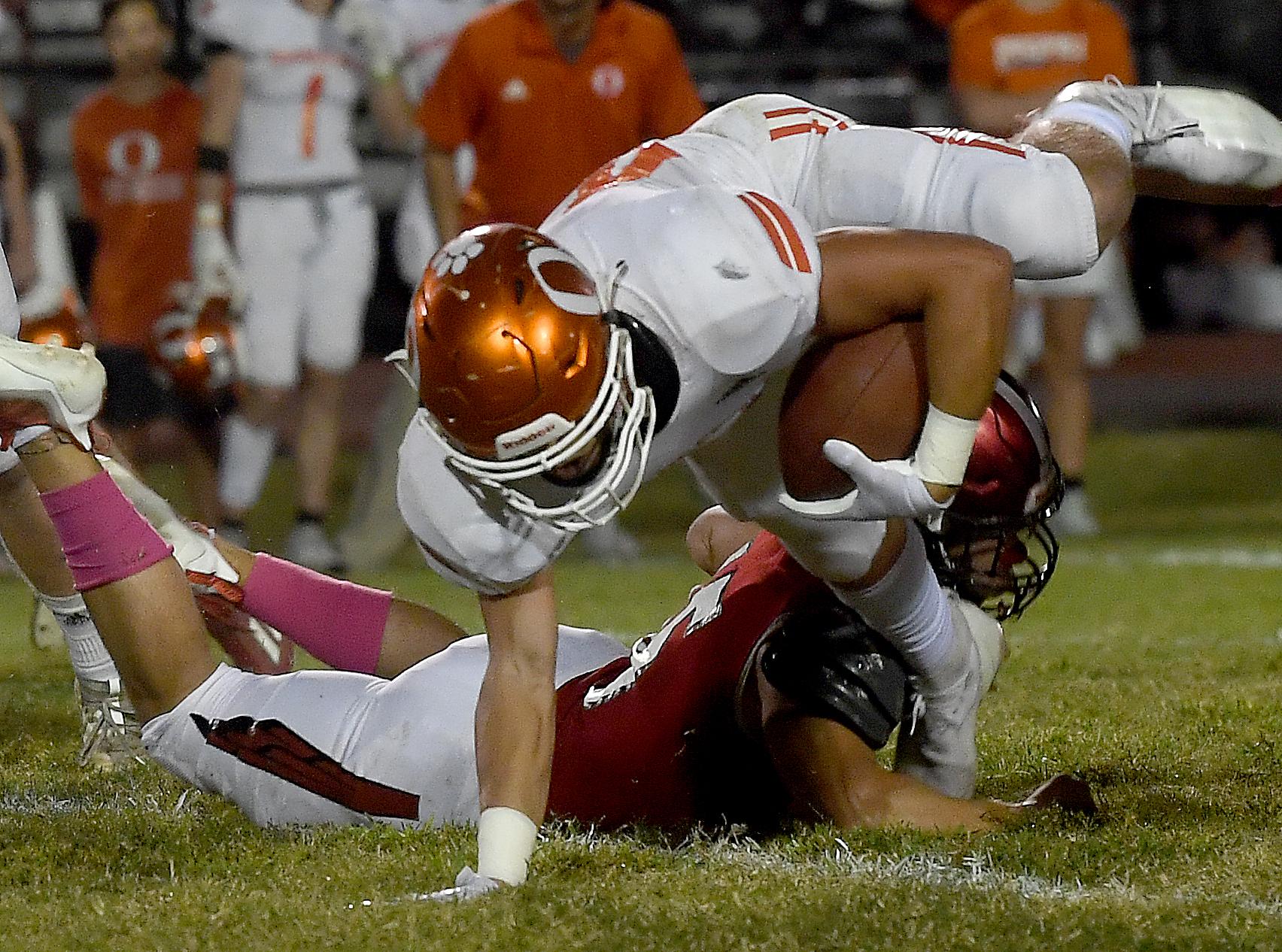 At 6 feet, 180 pounds, Dischler’s measurables don’t jump off the page, but by the end of a game, his stats sure do.

Dischler’s 2021 season with the Bobcats included 1,450 yards and 20 touchdowns on the ground, proving himself as one of the most productive running backs in Southeast Texas.

Dischler’s game tapes are even more impressive than his stats. The Bobcats utilize a physical, run-heavy offense, and no one is featured more than Dischler. He’ll also dish out some punishment defensively from the strong safety position.

Orangefield is back in the conversation for district titles on an annual basis, and Dischler is a big reason why. Let’s examine how Dischler gets it done in our latest Beaumont Enterprise Film Study:

Nothing gets a team more hyped than when a ball carrier runs over a defender. Dischler does it often for Orangefield. He already got started this season in the Bobcats’ first scrimmage against Little Cypress-Mauriceville.

Related: Film study: Da’Marion Morris does it all for LC-M

In the first play of this scrimmage highlight, Dischler takes a hand-off around the left edge. He then turns to the middle and is met by an LC-M linebacker, who stands little chance as Dischler puts his shoulder down and deposes of the would-be tackler.

Dischler then beats the safety to the sideline and scores for Orangefield. He might not look that menacing, but Dischler shows in this highlight that he has no problem running over defenders.

Dischler has a knack for staying patient, then using a sudden burst of speed to beat defenders. It happens here in this highlight from a game against Anahuac last season.

The play is a pitch to the right side. Dischler takes the ball, but doesn’t force anything as his long strides take him toward the sideline. After a few moments, Dischler uses his deceptive speed as he races down field for a score without being touched.

A play that first looked like only a moderate gain turned into a 47-yard touchdown thanks to Dischler and some strong blocking by the Bobcats receivers.

Another way Dischler finds space is by using well-timed cuts up the field.

In this highlight from a game against Hamshire-Fannett, Dischler shows off that useful cutting ability. The first play is a one-on-one with a safety in the open field. Dischler makes one hard cut with his right foot, and it’s off to the races for a score.

The second play shows a different kind of cutting from Dischler. In this clip, he almost appears to be galloping as he cuts through Hamshire-Fannett’s front seven.

If you’re flat-footed while defending against Orangefield’s offense, Dischler will make you pay.

If you want to be highlighted in the next Beaumont Enterprise Film Study, send your tape to [email protected], or message @mattGfaye on Twitter.

Batman Christian Bale Gave a Blatant Reason Behind Arnold Schwarzenegger Not Being Part of Terminator Salvation in 2008: “Franchise Doesn’t Need Him Now”

Ruben Randall - April 2, 2022 0
TV/Movies
"Bobby" tells a fictionalized version of the assassination of Robert F. Kennedy. The senator was killed in 1968 at the Ambassador Hotel in Los...