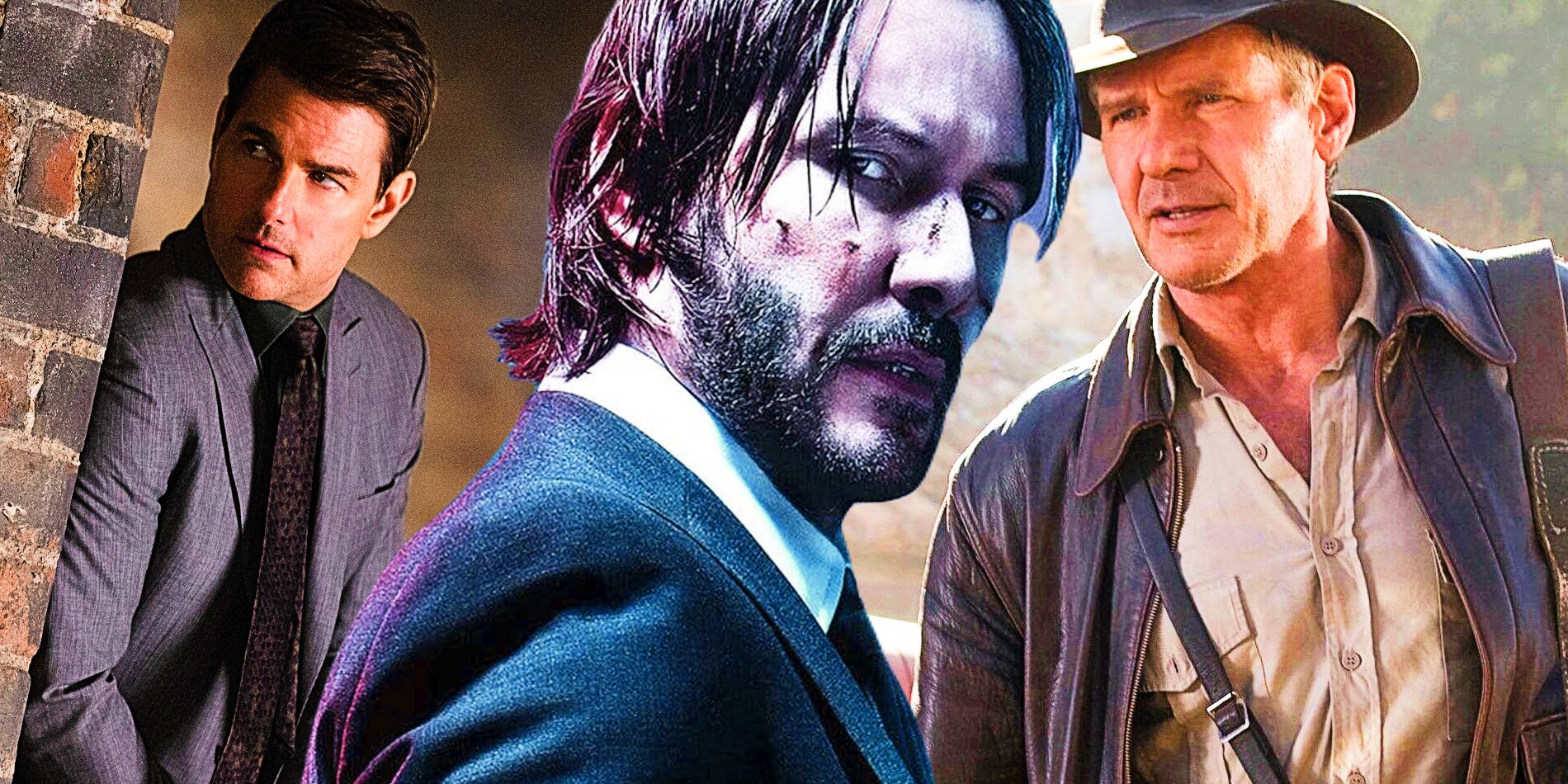 Some important ongoing movie franchises are skipping 2022 and others are returning in various forms in 2023 and beyond. As the movie theater business tries to get back to normal after the COVID-19 pandemic put the entire industry in check, studios continue to rearrange the releases dates for their upcoming titles. Whether it is for delays, an already scheduled sequel, or a planned installment with no release date locked, 2022 will be missing some big movie franchises.

That considered, 2022 has seen and will continue to see plenty of Hollywood’s major franchise entries. Now streaming on HBO Max, The Batman was released in theaters in March 2022 and was yet another proof that the moviegoing experience is far from over. As always, the MCU is also going strong in 2022 with Doctor Strange in the Multiverse of Madness, Thor: Love and Thunder, and Black Panther 2: Wakanda Forever as its theatrical releases. 2022 will also see the release of the long-awaited Avatar sequel, Avatar 2.

Related: The Most Anticipated Movies From Cannes Film Festival 2022

Even with all those big titles arriving in 2022, there are important Hollywood movie sagas saving their next installments for 2023 or beyond. That includes superhero, sci-fi, action, and horror franchises. Here is a roundup of every ongoing movie franchise skipping 2022.

The highly awaited Indiana Jones 5 is currently set to come out on June 29, 2023, after successive delays. Logan director James Mangold is helming the production, and filming has already wrapped. Harrison Ford returns as Indy and will be joined by Phoebe Waller-Bridge, Mads Mikkelsen, and Antonio Banderas.

Announced still in 2019 during the opening weekend of John Wick: Chapter 3 – Parabellum, John Wick: Chapter 4 has yet to hit theaters – and it will not be in 2022. Initially slated for May 21, 2021, box office hopeful John Wick 4 had originally been moved to May 27, 2022, and a fifth movie would be shot back-to-back with it. However, primarily due to the COVID-19 pandemic, John Wick 4 was pushed back for nearly a year. The fourth chapter in the Keanu Reeves-led franchise will now arrive on March 24, 2023, and production has yet to start for John Wick 5.

Spider-Man: Into the Spider-Verse

Movie Franchises Confirmed To Return After 2022

Star Wars: After Star Wars: The Rise of Skywalker ended the Skywalker Saga with an underwhelming box office performance – at least compared to how strong the trilogy started – the future of Star Wars on the big screen became more uncertain. That said, Star Wars already has its theatrical comeback scheduled: Rogue Squadron is slated for December 22, 2023. The Patty Jenkins film was once reported as being on hold, but Disney’s calendar for its upcoming releases still has Rogue Squadron with its original date. Filming has yet to begin, and not much is known about the story.

Fast & Furious: Despite its great box office performance during a pandemic, the fact that F9 was released more than 12 months after it was initially planned meant that the tenth Fast & Furious movie also had to move. Fast X, the first of a two-part film that will wrap up the Fast & Furious saga, is set to premiere on May 19, 2023, and will see Jason Momoa and Brie Larson joining the franchise. While the eleventh and final Fast & Furious movie does not have an announced date, it is likely that Fast 11 will be released in 2024 as it is being shot back-to-back with Fast X.

The Avengers: While the MCU itself is not skipping 2022, the Avengers films are big enough to be considered as its own franchise – one that is not returning in 2022. While Avengers 5 hasn’t been officially announced, a fifth Avengers movie in the next few years is a given.

Mad Max: While a direct sequel to Mad Mad: Fury Road has yet to happen, the Mad Max franchise will continue with Furiosa. The prequel film starring Anya-Taylor Joy will be directed by George Miller and is expected to premiere on May 24, 2024. Charlize Theron, who played Furiosa in Fury Road, is not returning.

Star Trek: Five years after Star Trek Beyond, it looked like the Star Trek franchise would focus on the TV shows only. However, taking many by surprise, Paramount announced a fourth movie in the 2009’s Star Trek chronology, with most of the cast expected to return. Star Trek 4 is expected to release in December 2023 and currently has no director attached.

Monsterverse: Godzilla vs. Kong was a solid hit despite being released same-day on streaming in the high of the COVID-19 pandemic, and a direct sequel is expected to be filmed in 2022. Although Warner Bros. has not officially announced it, an Australian government agency confirmed that a Monsterverse film would shoot in Queensland later this year. Details of the story are still unknown.

Related: Godzilla’s Next Villain Needs To Break A MonsterVerse Trend

Jumanji: After the commercial success of Jumanji: Welcome to the Jungle and Jumanji: The Next Level, a third movie in the Dwayne Johnson-led franchise was a given. Although no release date has been announced, Johnson has already revealed some details about the planned story. Director Jake Kasdan is expected to return.

Bond: No Time To Die was a final chapter by all means, but that is not to say the Bond franchise has ended. Quite the contrary, Bond 26 is happening. So far, no director, and more importantly, no new James Bond actor have been announced.

Lethal Weapon: It has been 24 years since Lethal Weapon 4, but a fifth movie is happening. Following the passing of original director Richard Donner, Mel Gibson will helm Lethal Weapon 5. No release date has been announced yet.

Related: Every Richard Donner Movie Ranked From Worst to Best

Beverly Hills Cop: 28 years may have passed since the last movie, but Beverly Hills Cop 4 is still happening. Paramount and Netflix are co-producing the film that will see Eddie Murphy back as Axel Foy. No release date has been announced.

Dune: The wishes of audiences and director Denis Villeneuve were heard, and Dune: Part Two is being developed at Warner Bros. Dune: Part Two is expected to shoot in the latter half of 2022 and is scheduled for October 20, 2023.

Movie Franchises That May Continue After 2022

Related: Every Conjuring Movie Featuring The Disciples Of The Ram

The Purge: While The Forever Purge was meant to be the final movie in the franchise, producer James DeMonaco has revealed he wants to do another movie. A potential Purge 6 would focus on the story of Leo, Frank Grillo’s character. Grillo starred in The Purge: Anarchy and The Purge: Election Year.

Bad Boys: While Bad Boys 4 seemed like a given after Bad Boys For Life’s box office performance, the Will Smith Oscars incident has changed things. Per THR, Bad Boys 4 is now on hold. As with every upcoming Will Smith project, the long-term consequences of the Oscars slap fiasco are still a mystery.

Shrek: In 2018, a fifth Shrek movie, planned as a reboot, was reported to be in the works with Chris Meledandri as a producer. Two years before that, Eddie Murphy had confirmed that a script was finished. However, not much is known about the status of the project.

Related: Why Puss In Boots 2 Looks So Different From Shrek

Hunger Games: The main storyline may have ended, but Lionsgate is developing a Hunger Games prequel focused on a younger Coriolanus Snow based on Suzanne Collins’ prequel novel The Ballad of Songbirds and Snakes. Production is planned to start sometime this year with a release in late 2023 or early 2024.

Movie Franchises That Are Becoming TV Series After 2022

Alien: While Alien: Covenant is not getting a sequel, the Alien franchise will continue on TV. In 2020, Disney announced that an Alien TV series will be developed for FX. Legion and Fargo creator Noah Hawley will produce, and filming will start in 2023.

Monsterverse: Apart from the Godzilla vs. Kong sequel shooting in 2022, the Monsterverse will also continue on TV. In January 2022, Apple TV+ announced that a series based on the Legendary franchise had been ordered. The story will follow a family with a connection to the Monarch organization.

Blade Runner: Blade Runner 2049 is getting a sequel in the TV format, titled Blade Runner 2099. Amazon Studios announced in February 2022 that a Blade Runner series is being developed for the streaming platform. Original Blade Runner director Ridley Scott is attached as an executive producer.

Percy Jackson: Percy Jackson is once again being adapted for live-action, this time as TV series. Disney+ is producing a Percy Jackson show that will cover the events of the first book. Walker Scobell has been cast as Percy Jackson after his break-out role in The Adam Project.

Related: The Pitch Perfect TV Reboot Is Already Missing The Point Of The Movies

John Wick: Apart from John Wick 4 and 5, the John Wick franchise will also have a TV chapter: an event miniseries produced for Starz. The Continental is a prequel to John Wick and will feature a younger Winston. No release date has been announced.

The Batman: The Batman is not one of the movie franchises that skipped 2022, as one of the year’s biggest box office hits, so far. However, the world created in the movie will also continue through TV shows. A spinoff series focused on the Penguin has been confirmed for HBO Max with Matt Reeves as a producer and Colin Farrell returning as the Penguin. An Arkham Asylum spinoff show is also in the works.

Next: The Best Upcoming Movies


Marcelo Leite is a senior writer for Screen Rant with years of experience in creative and academic writing. Although his chosen field was structure engineering, there is nothing he likes better than writing about the things he loves.

House Of The Dragon’s Emma D’Arcy And Olivia Cooke On Learning High Valyrian And...