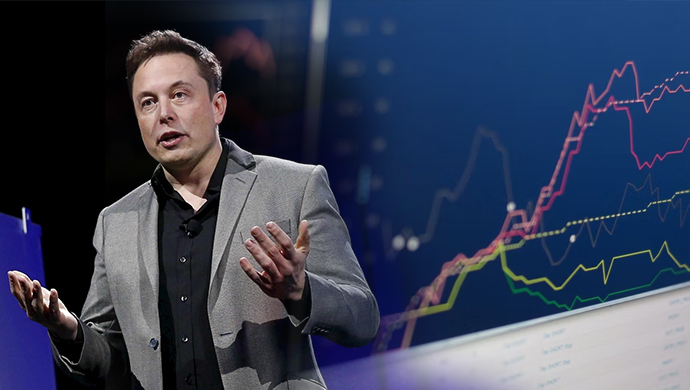 Elon Musk is a curious guy. The son of a Canadian-born model and a South African engineer, he grew up in Pretoria before moving to Canada and later graduating from the Wharton School at the University of Pennsylvania. Fascinated with science, he initially considered pursuing a Ph.D. from Stanford before dropping out to launch Zip2, his first internet startup. He sold the company to Compaq just a few years later for $307 million.

Ever the entrepreneur, Musk was soon in a lot of spaces. What eventually became PayPal was his next major venture. Then SpaceX. Followed by, of course, Tesla – the electric car company purposed with saving the planet.

Over the years, he’s accumulated extraordinary wealth. Today, his net worth is estimated to be roughly $235 billion.

Musk is a character. Thrice married and divorced (twice to the same woman), the latest reports are that he has nine living children (his first died from SIDS). Apparently, four of his children have been born in just the past few years. A son named “X” and a daughter named “Y” – are with his sometimes-girlfriend, Grimes – the Canadian songstress, who describes her relationship with Musk as “fluid.” An apt description as it appears Musk also fathered a set of twins born to Shivon Zilis, an executive at one of his companies, around the same time “Y” was born.

Frequently dubbed by the media as an atheist or agnostic, Musk claims no religion and believes the American right is consumed by “religious zealotry.” Over the years, his donations have reflected that; with considerable sums given to Dianne “the dogma lives loudly within you” Feinstein, Hillary Clinton and Gavin Newsom, to name a few. His Tesla Model Y is a perennial favorite among virtue signaling progressive profs and Whole Foods shoppers love his government-subsidized solar panels.

But lately, Musk has been drawing the ire of his biggest fans. There is the Twitter deal and his full-throated support of free speech; AOC is in a tizzy. His public pledge to turn his financial spigot toward the Republicans has Elizabeth Warren now calling him a greedy corporate titan. In response to the wave of he/his/she/hers labels popping up on social media, Musk tweeted, “pronouns suck.” Progressives went apoplectic. Still others were dumbfounded to discover he describes himself as a “strong” supporter of the Second Amendment.

If Musk is anything, he’s a disruptor. On an intergalactic level. Like disruptors before him, he thrives on shaking things up. So, his story gets even more interesting.

Starting with his opposition to Covid lockdowns. At the height of the pandemic, Musk famously disobeyed several California orders. In May 2020, he re-opened Tesla’s Alameda County production facility and told officials he would “be on the line with everyone else” if authorities were looking to arrest workers. Though vaccinated himself, Musk railed against vaccine mandates. When Prime Minister Justin Trudeau sent in club-wielding police to deflate bouncy houses and round up Canadian citizens for demonstrating “unacceptable views” during the now-famous trucker protests, Musk tweeted, “Canadian truckers rule.”

Perhaps even more surprising, he’s repeatedly warned about population decline. Yes – decline. At a time when tree worshippers publicly vow to birth only one child or forego having any as a brave act of selflessness, Musk stands outside the circle. Whether that’s enough to make Stephen Colbert slash the tires of his Model S, I’m unsure. But Bernie’s wisps of white hair must stand on end when Musk declares, “If people don’t have more children, civilization is going to crumble. Mark my words.”

And then there’s his position on artificial intelligence. The world’s greatest tech enthusiast calls it an “existential risk.” In 2017, he told the National Governor’s Association that, “I have exposure to the most cutting-edge AI and I think people should be really concerned by it.” Interestingly, Musk has stressed the importance of taking a person-centric view when it comes to development, arguing that the goal must be helping, not replacing. He is calling for increased regulatory oversight to make sure the tech oligarchy doesn’t “do something foolish” and warns that we should be very careful to “avoid AI becoming other.”

But, for me, Musk’s position on short-selling is his most intriguing. He’s against it – adamantly – and says it’s used by big financial players at the cost of small investors and, often, smaller public companies.

In the world of financial markets, short-selling involves borrowing a stock from a third party with the sole intention of selling it. The trader who shorts the security is doing so because he believes its value will decrease (not increase) and that, when it does, he will buy it back on the open market and return it to the initial lender, pocketing the difference. Musk explains that big hedge funds “short and distort” – they “short a company, conduct a negative publicity campaign to drive the stock price down temporarily and cash out, then do it all over again many times.” Within the past few months, Musk made headlines outing Bill Gates – the media darling in the fight against global warming – for taking a multi-billion dollar short position on Tesla.

Some of this may sound familiar to non-market mavens because short-selling became highly-publicized eighteen months ago during what is now known as the “GameStop squeeze.” In early 2021, a band of non-professional small traders used the social media site Reddit to coordinate and avenge the practice. They purchased large quantities of GameStop’s stock to drive up its value at a time when prominent hedge funds had taken short positions. The event halted trading of the stock and resulted in major losses at big funds and even led to several fund closures.

Why does any of this matter? Why should Catholics care about short-selling?

Because we are in the marketplace. Our faith calls us to understand our role there. As consumers, employees, sometimes employers and – increasingly, as investors – we often wonder: can practicing Catholics be capitalists? Is any of this good?

As Pope John Paul II puts it in Centesimus annus:

If by ‘capitalism’ is meant an economic system which recognizes the fundamental and positive role of business, the market, private property and the resulting responsibility for the means of production, as well as free human creativity in the economic sector, then the answer is certainly in the affirmative.

Business is a noble vocation, directed at producing wealth and improving our world. It can be a fruitful source of prosperity for the areas in which it operates, especially if it sees the creation of jobs as an essential part of its service to the common good.

But, of course, when we encounter practices like short selling, we are left to wonder: Is this “noble”?

Investing is. Catholic teaching defends the right to private property and reminds us that the process of working, earning and taking some of what one owns to freely invest in some other “good” can be – well – good. But the use of the word “can” is deliberate; investment decisions are always moral choices. When we make them, we are critically responsible for considering “the good of persons” (Catechism of the Catholic Church) because, as in everything, the dignity and truth of the human person is paramount. In Centesimus annus, Pope John Paul II explains that our investment decisions should be guided by “an attitude of human sympathy” because they will reveal “the human quality of the person making such decisions.”

Let’s be clear: short-selling is not investing. The short seller is not using his money to help build anything. He’s not employing his wealth to improve the condition of any other person or party. He’s not taking ownership of anything. In fact, he’s seeking to sell something he doesn’t own. He’s aiming to profit from the failure of someone else’s asset and he’s making a bet which may be designed to hasten its failure. As Musk explains, because short sellers tend to be large institutional investors, their powerful status in the market helps them corral followers into rallying behind their short position, thereby helping make the targeted asset’s failure an inevitability.

As Pope Benedict XVI emphasizes in Caritas in veritate, a properly ordered ethic is needed for the economy to function properly. And, here again, Benedict notes that it is important to remember that not any ethics will do – the ethics must be centered on the dignity and truth of the human person. He specifies that it is necessary “to develop a sound criterion of discernment, since the adjective ‘ethical’ can be abused. When the word is used generically, it can lend itself to any number of interpretations, even to the point where it includes decisions and choices contrary to justice and authentic human welfare.”

That is an amazingly relevant point which Catholic colleges and universities responsible for teaching tomorrow’s leaders should consider. Through a confused mix of “ethical” lenses, perversions are bound to spill into the marketplace. In the name of “equality” and “justice”, we regularly witness rampant and cruel forms of discrimination and vilification of believing Christians. With the wrong ethics, words are turned inside out. Meaning is corrupted. Things get hazy. We all lose the plot. We don’t see things we should. We don’t say things we must.

So, let’s be clear-eyed about this: whatever Elon Musk is, he is right about short selling. And whether this pleases Musk or not, he’s done an excellent job not only highlighting the problem but beginning to make a Catholic case against it.

Admittedly, the market can be a negative force, not because it is so by nature, but because a certain ideology can make it so. It must be remembered that the market does not exist in the pure state. It is shaped by the cultural configurations which define it and give it direction. Economy and finance, as instruments, can be used badly when those at the helm are motivated by purely selfish ends.

I know, I know. My friends in finance are snickering. There he goes again, they’re thinking. Naïve. A simpleton hung up on his Catholic faith. “Short-selling is about hedging risk,” they’ll say. And then they’ll remind me that I took a couple fewer econometrics classes than they.

But I know a little something about buying and selling. And so does Elon Musk. And, as he recently put it: you can’t sell houses you don’t own or sell cars you don’t own. Why should you be able to sell a stock you don’t own?

If you value the news and views Catholic World Report provides, please consider donating to support our efforts. Your contribution will help us continue to make CWR available to all readers worldwide for free, without a subscription. Thank you for your generosity!