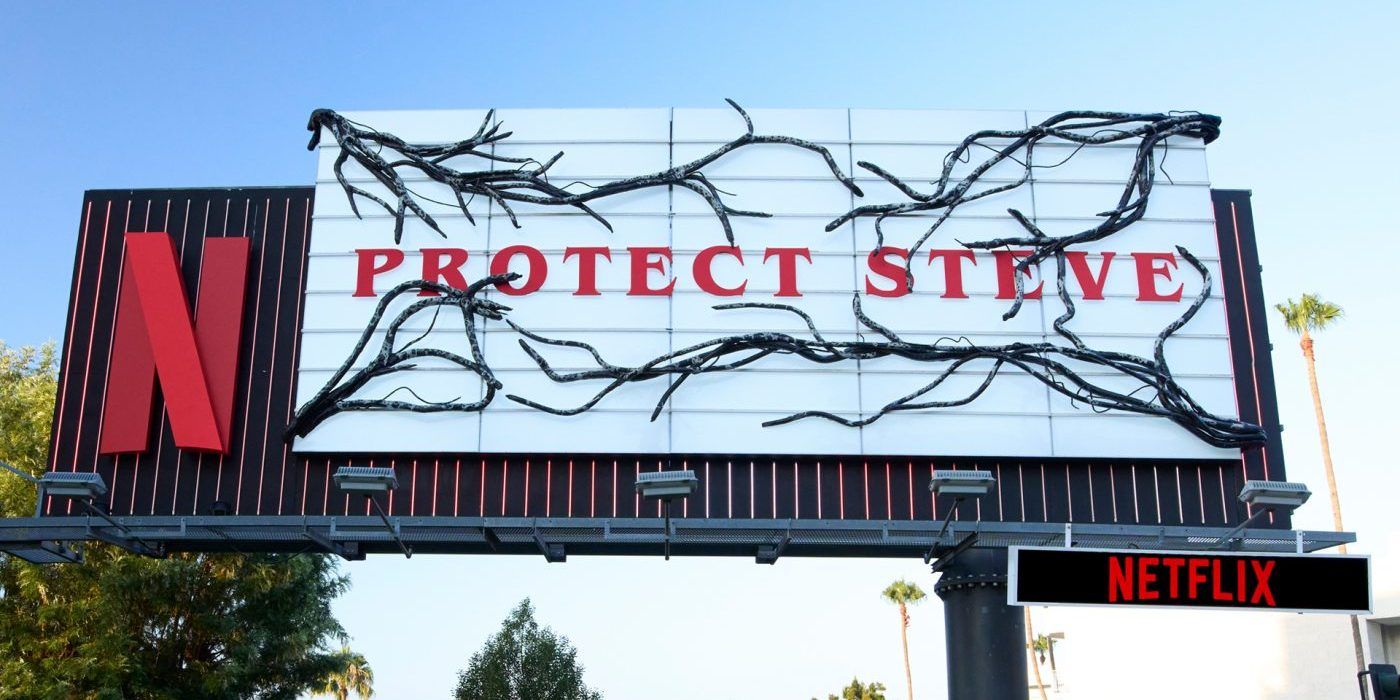 Everyone seems to be worried about Steve Harrington heading into the last episodes of Stranger Things season 4, and Netflix made a billboard about it.

An ominous new Stranger Things billboard trolls fans over Steve Harrington’s fate in season 4, volume 2. Steve (Joe Keery) was introduced in Stranger Things’ first season as the quintessential, antagonistic jock, and boyfriend of Nancy Wheeler. Creators Matt and Ross Duffer were originally going to kill Steve off in Stranger Things season 1. However, Keery’s charisma (and incredible hair) helped them to create one of the series’ most beloved characters, with Steve’s transformation from villain to baseball bat-wielding babysitter being hailed as season 1 and 2’s greatest strengths.

Following a nearly three-year hiatus, Stranger Things season 4, volume 1 premiered on Netflix last month. The season picked up with Eleven, Will, Mike, Jonathan, and Joyce in California, Hopper in a Russian prison, and Hawkins, Indiana being plagued by the new big bad, Vecna. As the Party tried to find a way to deal with Vecna, Steve was dragged into the Upside Down and beaten up (again) by a handful of bat-like creatures in episode 6. Thankfully, he was saved by Nancy, Robin, and Eddie in episode 7 and, despite losing a lot of blood, appeared to be fine. As Eleven remembered the massacre at Hawkins Lab (and Vecna’s origin), volume 1 ended with Nancy in telekinetic crosshairs. Now, the final two episodes of Stranger Things season 4 will release on Netflix this Friday, and everyone is still worried about Steve.

See also  Yellow City Comic Con Is Back, And I Hope You Like Hocus Pocus.

Related: Stranger Things’ Vecna Weakness Was Secretly Revealed By Will In Season 2

Netflix’s official social media recently shared a photo of a new Stranger Things billboard, which taunts fans over their concern for one Steve Harrington. Shrouded by tentacles straight out of the Upside Down, it reads “Protect Steve.” On top of that, the tweet itself demands, “AT ALL COSTS!!!” Check it out below:

Not counting the victims at Hawkins Lab or supporting characters like cheerleader Chrissy Cunningham, Hawkins High reporter Fred Benson, and basketball player Patrick McKinney, Stranger Things season 4 has yet to kill a major character of any kind. The Duffer Brothers have repeatedly teased that “the kids are no longer kids” and “everybody is in danger” heading into Stranger Things season 4, volume 2, leading to rampant speculation about which cast members will make it to the final season. Despite season 4 being darker and more mature, it seems unlikely volume 2 will kill any of the younger members of the cast—which is part of the reason why so many think Steve will get the ax. At this point, killing Steve would have the most emotional impact and certainly make everything direr heading into season 5.

Images from Stranger Things season 4, volume 2 have revealed that Nancy survives her encounter with Vecna from the end of volume 1. That said, both her and Steve may survive the season thanks to established plot armor. Season 3’s Jim Hopper fake-out death is a perfect example of how Stranger Things is reluctant to off main characters while instead killing likable supporting characters. The series’ most significant deaths have been that of Barb, Bob, Alexei, and Billy, with the latter being a great character albeit intentionally unlikable. Deaths in Stranger Things tend to be ones that will have the most effect on the main characters without being utterly heartbreaking for viewers. If season 4’s finale follows this pattern, it’s characters like Eddie Munson, Dr. Martin Brenner, Dr. Sam Owens, and Dmitri who are in the most danger. If Stranger Things intends to go for the fandom’s jugular, Steve would be the way to do it. As is evident by the billboard, Netflix is well aware of that fact.

See also  Ben Platt’s Pants Were At It Again


Josh Plainse is a writer, movie, and television fanatic based out of Wisconsin. Josh works for Screen Rant covering the latest in entertainment while simultaneously pursuing the never-ending dream of becoming an established novelist, screenwriter, and/or decent human being. Josh would accredit characters such as Goku, Han Solo, Simba, and Maximus Decimus Meridius for instilling within him an affinity for storytelling. It is this incessant obsession which has propelled him to seek opportunities that inform, entertain, and inspire others.

Ant and Dec’s net worth, height and age as ITV I’m a Celeb returns