Olivia Cooke is a British actress known for her starring role as Emma Decode in Bates Motel and Samantha Cooke / Art3mis in Ready Player One. Aside from that, she has been nominated multiple times throughout her 10-year career and she has won two Best Actress awards for her work in Katie Says Goodbye. Most recently, she is set to grace the small screen once again in the much-anticipated Game of Thrones prequel House of the Dragon. In this article, however, we will be talking about Olivia Cooke’s net worth in 2022. Olivia Cooke’s net worth in 2022 is estimated to be $2 million. This is agreed upon by multiple reputable sources such as Celebrity Net Worth.

Let us now learn more about where it all started for the spectacular British actress and how she rose up through the ranks of the entertainment industry.

Olivia Kate Cooke was born on December 27, 1993, in Oldham, Greater Manchester, England, to parents Lindsay Wilde and John Cooke. Her mom was a sales representative and her father was a police officer. Unfortunately, her parents divorced when she was a child, and Olivia and her sister lived with their mother.

She first started acting at the age of 8 years old at the Oldham Theatre Workshop, an after-school drama program in her hometown. Olivia Cooke attended Royton and Crompton Academy for her secondary school and she enrolled at Oldham Sixth Form College where she studied drama.

Olivia Cooke played the role of Maria in the college production of Westside Story. She also booked her first, and last, leading role for the Oldham Theatre Workshop in their remake of Cinderella titled Prom: The Musical.

She eventually got commercial roles when she secured the services of her first local agent. On top of that, she got the chance to appear in One Direction’s “Autumn Term” tour video where she was seen getting a piggyback ride from Harry Styles.

During that time, she was keen on applying to the Royal Academy of Dramatic Art (RADA), but she was discouraged by her agent because she was already getting a lot of work as an actress. Despite that, she still advanced to the final rounds of the audition, but failed to make the cut.

Olivia Cooke got her first break when she was seen by Beverley Keogh, a casting director, while she was performing at the Oldham Theatre Workshop. She then helped Cooke book roles in a couple of BBC miniseries’. She played the characters of Megan “Meg” Demoys in Blackout and Nancy Linnet in The Secret of Crickey Hall. Both projects had 3 episodes each.

She then booked the role of Jane Harper in the British supernatural horror film The Quiet Ones wherein she beat out a lot of European actresses in a grueling casting process. The movie was shot in 2012 but was released in 2014. As for Olivia Cooke, she finished in 3rd place for the Best Supporting Actress award in the Fangoria Chainsaw Awards. Obviously, this would help to add to Olivia Cooke’s net worth in 2022.

After The Quiet Ones finished shooting in 2012, Cooke hired an agent in Los Angeles and she eventually booked the role of Emma Decody in the prequel of the 1960 psychological thriller film Psycho. This was her first American role. The Bates Motel ran from 2013 to 2017 and Olivia Cooke appeared in 44 episodes as part of the main cast

In 2014, she starred in the role of Ruby in the short film Ruby’s Skin wherein she won the UK Stars of Tomorrow award by Screen International and the Best Actress award from the Eerie Horror Film Festival Awards.

In the same year, she starred in her 2nd feature film as she was cast alongside Brenton Thwaites and Laurance Fishburne in the science fiction thriller movie The Signal. She also led the cast of Ouija, a horror film based on the infamous board game. Despite garnering mixed reviews, it was a box office success as it grossed $102.5 million worldwide.

The following year, she landed the leading role of Rachel Kushner in the comedy-drama film Me and Earl and the Dying Girl. Her performance earned her multiple nominations including Best Supporting Actress, Best Female Newcomer, Best Breakthrough Performance – Female, and Best Actress.

She was then cast as the titular character in the drama film Katie Says Goodbye. Olivia Cooke won the Best Actress award from the Manchester Film Festival and the Newport Beach Film Festival because of her performance in the film.

However, she gained her first mainstream role when she booked the role of Samantha Cooke / Art3mis in Steven Spielberg’s Ready Player One (2018). The film gained mostly positive reviews from critics and fans alike, and it grossed over $582.9 million worldwide.

In 2019, she starred alongside Riz Ahmed in the drama film Sound of Metal.

As for her TV career, Olivia Cooke was cast as Becky Sharp in the miniseries Vanity Fair and she appeared in 7 episodes. She then joined the romantic comedy anthology series on Amazon Prime titled Modern Love where she played the role of Carla. She appeared in 2 episodes as she shared the cast with the likes of Anne Hathaway, Ed Sheeran, Julia Garner, and Tina Fey.

Olivia Cooke then booked in what might be one of the biggest roles of her career. She was cast as Lady Alicent Hightower, the daughter of Ser Otto Hightower and known as the most comely woman in the Seven Kingdoms, in the Game of Thrones prequel House of the Dragon. She joins the likes of Emma D’Arcy, Matt Smith, and Rhys Ifans.

On top of her acting experience, Olivia Cooke also showed her philanthropic side when she joined Bulgari’s Save the Children campaign to celebrate the brand’s 130th anniversary. She joined various stars such as Jeremy Renner, Lizzy Caplan, Jon Hamm, Meg Ryan, Naomi Watts, Olivia Munn, and many more.

She has been in a lot of big projects despite being just 28 years old, and it is no surprise if she ends up booking more major roles in the near future as her acting chops continue to improve day after day.

With all of that being said, were you surprised about Olivia Cooke’s net worth in 2022? 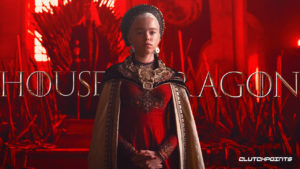 Olivia Cooke on the Complex Women of ‘House of the Dragon’...

8 Things to Know About Rebecca Ferguson

Actress Olivia Cooke, Known for Her Performances in Bates Motel and...