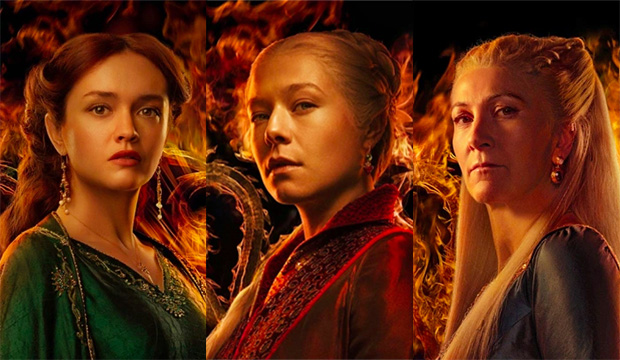 Who run the world? In “House of the Dragon,” it is looking more and more like it’s the matriarchs of Westeros: the calculating Queen Alicent Hightower (Olivia Cooke), the current Princess and future Queen Rhaenyra Targaryen (Emma D’Arcy) and the “Queen Who Never Was” Princess Rhaenys Targaryen (Eve Best). Awards voters, we hope you’re paying attention.

“House of the Dragon,” the prequel series to HBO’s megahit “Game of Thrones,” was created by “Game of Thrones” author George R. R. Martin and collaborator Ryan Condal, and stars Paddy Considine as the Targaryen king, alongside Matt Smith as Prince Daemon Targaryen, D’Arcy as Princess Rhaenyra Targaryen, Cooke as Alicent Hightower, Rhys Ifans as Ser Otto Hightower, Steve Toussaint as Lord Corlys Velaryon and Best as Princess Rhaenys Targaryen. The 10-episode first season is set two centuries before the events of “Game of Thrones,” 172 years before the birth of the now-iconic “Thrones” character Daenerys Targaryen (Emilia Clarke), depicting the events leading up to and covering the bloody Targaryen civil war of succession known as the “Dance of the Dragons.”

We have already gushed over the knockout performances delivered by standout men Considine as King Viserys Targaryen and Emmy nominee Smith (“The Crown”) as Prince Aemond Targaryen. But let’s not forget the powerhouse mama-bear trio of the first season of HBO’s blockbuster “Game of Thrones” prequel: Olivia Cooke, Emma D’Arcy and Eve Best. You may know Cooke from her acclaimed turn in the Oscar-nominated indie film “Sound of Metal.” Viewers will be familiar with the two-time Tony nominated Best for her most high-profile TV role as Dr. Eleanor O’Hara in Showtime’s Emmy-winning “Nurse Jackie.” D’Arcy has become an overnight sensation as the future Queen of dragons, and could be poised to nab a rare nomination for gender non-binary performers in the upcoming TV awards season.

SEE Get to know all 29 ‘House of the Dragon’ characters

Cooke plays Queen Alicent Hightower, Princess Rhaenyra’s childhood companion and former best friend and the second wife and queen consort of King Viserys (Considine). D’Arcy plays current Princess (future Queen) Rhaenyra, King Viserys’ daughter and heir apparent, the firstborn and only surviving child of Viserys and his first wife, Queen Aemma Arryn. And Best portrays King Viserys’ cousin, wife of Lord Corlys Velaryon (Toussaint), the only child of the previous monarch’s heir and forever known as the “Queen Who Never Was,” a potential candidate to succeed her grandfather King Jaehaerys as ruler of the Seven Kingdoms, but passed over in favor of her younger cousin Viserys due to her gender.

The ninth episode of the show’s freshman season  (“The Green Council”) is a stellar showcase for Cooke and Best. Cooke features heavily in the backroom plot to crown her son Prince Aegon (Tom Glynn-Carney) to the throne, while also dealing with the genuine grief over the death of the King. Best, a fan-favorite of the season in a relatively smaller role, presides over arguably the most buzzworthy scene of the season to date. While King’s Landing citizens are herded into the Dragonpit to witness Aegon’s coronation, Rhaenys escapes to the Dragonpit caverns beneath the crowd, frees her dragon Meleys, breaches the cavernous hall and violently crashes the celebration astride her dragon, confronting the royal usurpers; but ultimately sparing them, leaving King’s Landing on dragonback rather than obliterating them all with the whisper of a single word, “Dracarys.”

See also  Why Exactly Is Musk Taking a Stake in Twitter?

While social media was ablaze with tributes and hosannas after Considine delivered his devastating swan-song performance in the previous eighth episode “Lord of the Tides,” by the following ninth episode, the buzz became even more deafening as fans and critics alike hailed Cooke and Best as MVPs of the episode. The explosive season finale then shined a spotlight on D’Arcy, who dazzled as the beleaguered princess, who with her aunt Rhaenys by her side, awaited the devastating blow to be dealt by her rival Queen Alicent, herself fighting to the death to keep her son on the iron throne.

SEE‘House of the Dragon’ bosses explain why Rhaenys didn’t just kill everyone with her dragon (yes, there’s a reason)

Between now and mid-next year, there’ll be plenty of conjecture about whether “House of the Dragon” can match its Emmy-magnet predecessor “Game of Thrones,” which amassed a staggering 164 Emmy nominations over eight years and a total of 59 wins across the board (holding the record for the most Emmys won for a drama series), including four for Best Drama Series for its last four seasons. In all, 32 nominations were for the original series’ cast, spread among 12 of its ensemble, with supporting actor Peter Dinklage the only actor from the show to win, which he did four times over the series eight season run.

The prequel’s Emmy prospects look pretty good so far. “House of the Dragon” has been a huge success for HBO, both commercially (to date, the series has averaged 29 million viewers per episode across platforms in the US) and with critics (it has an impressive 86% approval rating at Rotten Tomatoes). But the question remains — will the show’s popularity and critical approval push the likes of Cooke, D’Racy and Best to the front of the pack at next year’s Emmys? Time will tell, especially after the Screen Actors Guild and Hollywood Foreign Press announce their nominations in a couple of months, which might narrow the field of contenders in the crowded Best Drama Supporting Actress race.

PREDICT the 2023 Oscar nominees through January 24

Ruben Randall - May 30, 2022 0
Money
Kumail Nanjiani is another example that comedians are flexible creatures. The world really saw his funny side in HBO’s ‘Silicon Valley’, where he played Dinesh,...