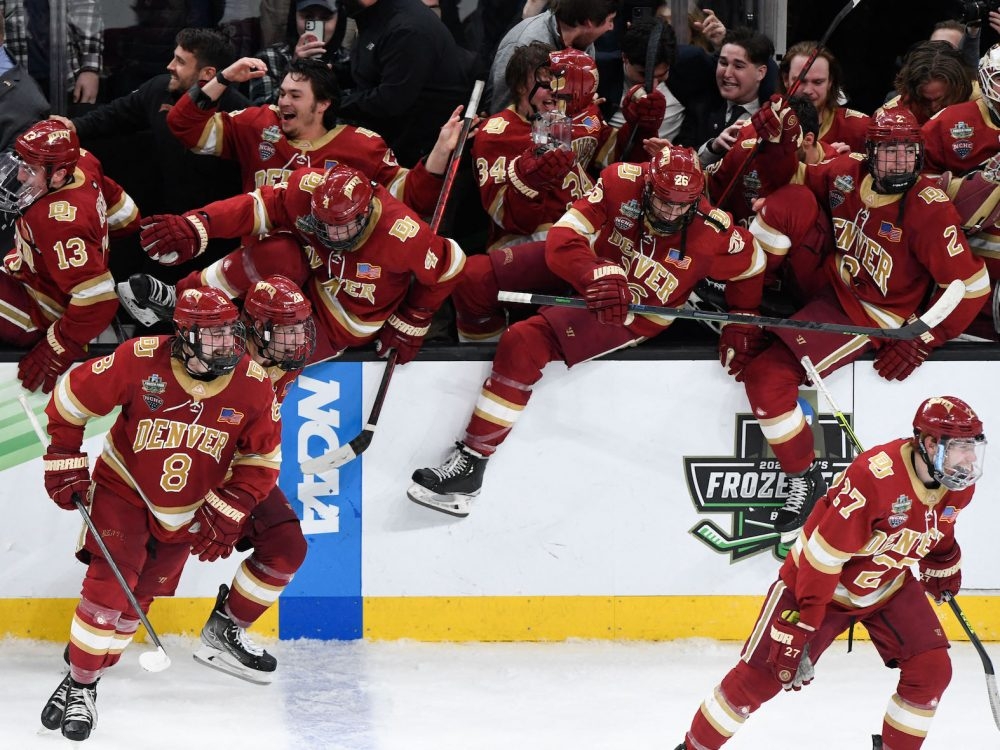 Does one of college hockey’s best shooters leave school on a Rocky Mountain high and sign a deal with the Oilers and report to Bakersfield to start his professional career?

Author of the article: 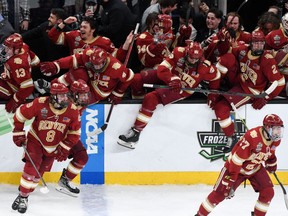 Denver Pioneers forward Carter Savoie (8), defenseman Shai Buium (26), and defenseman Sean Behrens (2) jump over the boards with their teammates at the end of the 2022 Frozen Four college ice hockey national championship game against the Minnesota State Mavericks at the TD Garden on April 8, 2022. Photo by Brian Fluharty /USA TODAY

So, now we wait on Carter Savoie.

With Denver’s 5-1 NCAA championship win over Minnesota State Saturday in Boston, the Edmonton Oilers’ fourth-round draft in 2020, has a decision to make.

Does one of college hockey’s best shooters leave school on a Rocky Mountain high and sign a deal with the Oilers and report to Bakersfield to start his professional career, or does he stay with his best buddy Mike Benning for a third season?

Savoie and Benning, both 20, are tied at the hip. They played with the junior A Sherwood Park Crusaders before both getting scholarships to Denver University.

Savoie was picked 100th in 2020 and Benning 95th by Florida Panthers, so they are inextricably linked.

See also  How many more college players will Oilers sign this spring? – The Athletic

Johnson and Power were playing big roles for Canada at the aborted world junior in Alberta last Christmas. Beniers was the first-line centre for USA.

The Oilers will give Savoie a few days to breathe the sweet success of being a college champion and maybe party a bit with his teammates before they discuss pro things. He’s repped by Gerry Johannson’s local firm.

“I haven’t really talked to him, but we’ll see what Carter’s thinking and I’ll let him know what I’m thinking this week,” said Oilers general manager Ken Holland. “It’s hard to find people who can score.

“Does he stay in school and have an even better college year and then turn pro? Certainly, he’s got the puck skills.”

If Savoie were to sign, he would be joining fellow offensive whiz kid wingers Xavier Bourgault (30 goals in 35 games, 57 points in Shawinigan) and Tyler Tullio (81 points in 62 games in Oshawa) in Bakersfield next season. Tullio is 20 now and Bourgault, hampered by injuries (core muscle, concussion) this season, is 20 in October.

Winger Matvey Petrov, who turned 19 in March, has 86 points in 60 games in North Bay (OHL) in his first North American junior season. But he could turn pro too because was drafted out of Russia, not the CHL.

LET’S HEAR IT FOR BENNING

Benning was named the most outstanding player of the Frozen Four. He set up the Denver’s tying goal by Ryan Barrow in the third period Saturday and got the winner with a blast from the left circle that got past Hobey Baker winner Dryden McKay’s blocker three minutes later.

“The bench was fired up on that (first) goal, obviously,” Benning, told reporters in Boston after the game at TD Garden. “Whenever you see a guy get a goal, the energy just builds and everyone wants to score one. We took the swing and it snowballed on them.

“Once we scored to tie it and they took a penalty, we knew we had to capitalize on it and just as it ended, I ripped one.”

Benning had 38 points in 41 games for Denver this season. He will be going back for his junior season with the Pioneers, who have nine NCAA titles, tied with Michigan for No. 1 all-time.

This ‘n that: Not saying Avs goalie Darcy Kuemper has the book, chapter and verse, on Ryan-Nugent-Hopkins shooting technique but he probably saw that low blocker shot in the skills contest Saturday a few times in practice when they were junior teammates with Red Deer Rebels for two seasons … Kuemper’s 11 saves in OT tied Marc-Andre Fleury for the most since three-on-thre started in 2005-2006. Fleury had 11 for Pittsburgh against Ottawa March 14, 2009 … Oilers farmhand defenceman Phil Kemp had a major scare Saturday when he crashed into the boards and was carried off on a stretcher but he was released from hospital and is back with his Bakersfield team … Yes, the Oilers were seriously in on Kuemper, the NHL’s hottest goalie since Jan. 1, when available last summer when Arizona was trading him but the Avs out-bid them. The Oilers weren’t giving up Evan Bouchard or Philip Broberg on the back-end. The Avs weren’t giving up D Bo Byram either, but bent on giving up Conor Timmins, who had played 37 games for them in a third pairing role … Nathan MacKinnon got the shootout winner after being 0-for-3 coming in, saucy move on Koskinen. The Oilers had won the first four shootouts, so maybe they were due to lose one … Oilers signee goalie Ryan Fanti got his first pro game Saturday, facing 40 shots in a 6-5 win for undermanned Bakersfield in Colorado Saturday.

Sign up to receive daily headline news from the Edmonton SUN, a division of Postmedia Network Inc.

The next issue of Edmonton Sun Headline News will soon be in your inbox.

Ruben Randall - February 10, 2022 0
Money
Few movie critics, if any, would have thought that Jennifer Hudson (“Respect”) and Lady Gaga (“The House of Gucci”) would be out of Oscar...