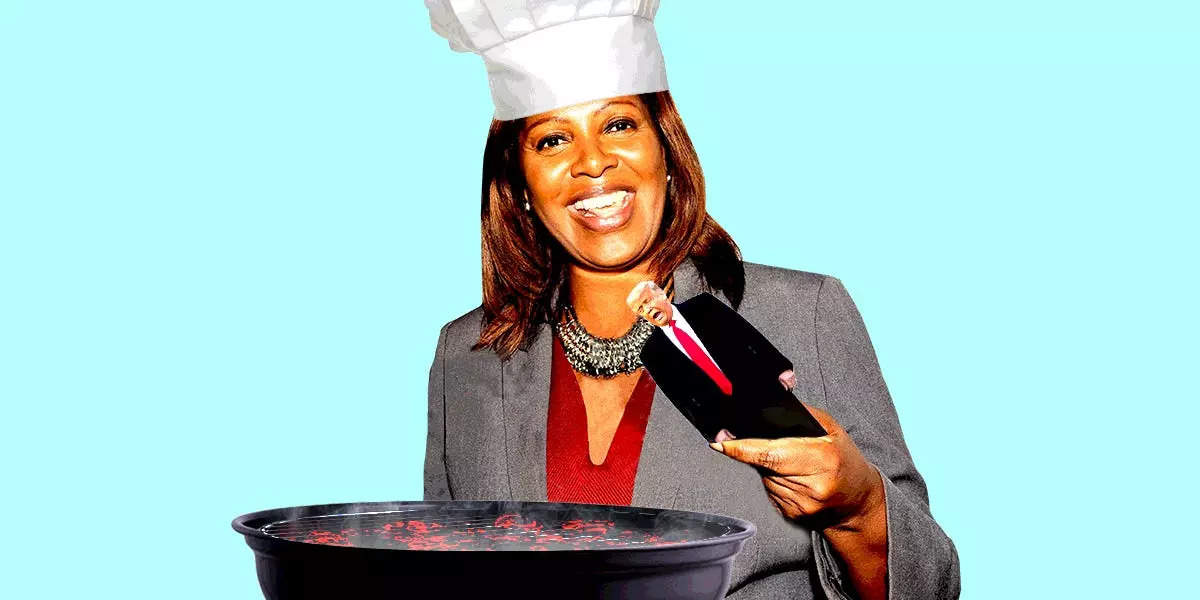 New York’s attorney general, Letitia “Tish” James, is poised to give Donald Trump a Memorial Day-worthy grilling, thanks to a court ruling Thursday ordering that he, Ivanka Trump, and Donald Trump Jr. all sit for sworn depositions.

But as James winds down her three-year inquiry into the Trump Organization — the former president’s New York-based hotel, real-estate, and golf-resort empire — James appears to have greater pyrotechnics in store.

Not criminal charges — James distanced herself from that idea in a filing two months ago. The legal brief asserted that James was making no effort to prosecute the Trumps or their business independent of whatever the Manhattan district attorney’s office might still be doing, which appears to be not much at all.

She would do so through a massive lawsuit seeking New York’s so-called corporate death penalty, as she has signaled over the past five months in legal filings alleging repeated and persistent fraud at Trump’s business.

Here’s what James may have cooking as she gets that grill going.

As to who would reside at the bottom of the lawsuit’s caption, as its defendants, James has given ample warning that she’s coming for Trump himself — and not just in the roughly five dozen public taunts and threats she’s made at the former president’s expense since running for attorney general, as recently compiled and annotated by Trump’s legal team in a handy spreadsheet.

James has said more formally, in legal filings this year, that a decade’s worth of Trump’s statements of financial condition — annual accountings of his net worth, used to secure hundreds of millions of dollars in bank loans and tax breaks — are rife with “misrepresentations.”

It’s a finding echoed by Trump’s own former accountant firm, Mazars USA, which conceded in February that the statements it had prepared “should no longer be relied upon.”

Trump personally certified the possibly faulty financial statements to be accurate every year through 2016 and personally reviewed at least some of them beforehand.

Then, in 2017, the Trump Organization was placed in a revocable trust, with the newly elected president as sole beneficiary. From then on, the statements were certified by another of her possible targets, Eric Trump, the executive vice president of the family business along with Donald Trump Jr.

Among the misrepresentations alleged by James’ office are exaggerations of Donald Trump’s liquidity, or cash on hand; claims that the values of some assets were set by “outside professionals” who do not appear to exist; and the inclusion of a hidden, flat percentage for Trump’s “brand value,” despite the statements’ express assurance that they excluded brand value in line with generally accepted accounting principles.

Eric Trump invoked his Fifth Amendment right more than 500 times when he was deposed by James’ office in October 2020 after fighting her subpoena for nearly half a year.

Trump family lawyers have maintained there has been no wrongdoing. They would most likely fight any accusations of bad math by saying that no Trump could be held personally responsible for the numbers certified in the financial statements and that real-estate appraisals are always subjective estimates.

But as the attorney general’s senior enforcement counsel Kevin Wallace alleged at a hearing in Manhattan earlier this year: “The focus of our investigation isn’t just subjective valuations that we disagree with. These are actual false statements.”

Some 40 people have been subpoenaed and deposed in the sprawling inquiry, James has said. It remains to be revealed who were questioned as witnesses and who, if any, as targets.

James is gearing up for ‘something substantial’

James doesn’t mince words. Neither will her lawsuit against the 500 or so separate entities that collectively do business as the Trump Organization.

For example, James’ ongoing 2020 lawsuit seeking to shut down the NRA is 164 pages long and followed an attorney-general inquiry spanning 18 months. Her Trump inquiry, by comparison, has taken twice as long and has been a far more massive effort.

Dozens of James’ staff attorneys have collected, organized, and reviewed more than 900,000 financial documents totaling some 6 million pages in the Trump inquiry, working out of the attorney general’s offices in lower Manhattan.

Challenges by the Trumps and the longtime appraiser Cushman & Wakefield have been aggressively met and litigated in three courthouses, including in Albany, where a federal judge last week tossed Trump’s Hail Mary lawsuit to end James’ inquiry.

Already, the amount of litigation has been mind-numbing. Just one filing — the attorney general’s response, in March, to the three Trumps’ appeal of having to testify — contains 5,587 pages of argument and evidence; its table of contents alone stretches 16 pages.

“Clearly the attorney general is gearing up for something substantial here,” said Norman Eisen, a senior fellow at the Brookings Institution, which issued a report in June exploring possible criminal charges.

“And her determination that she’s shown, her doggedness, just the sheer amount of litigation that she’s devoted to this, I think puts her in a very different category from her colleague Alvin Bragg, who cut and run despite his own lead prosecutors determining that there was proof beyond a reasonable doubt,” Eisen added, referring the to Manhattan DA.

An investigation from sea to shining sea

Possibly questionable financial dealings relating to at least 12 of the former president’s assets — properties spanning the US from east to west and even his golf course in Aberdeen, Scotland — have cropped up in hundreds of public court filings over the past two years.

On the West Coast, there is the oceanfront Trump National Golf Club just outside Los Angeles. There, James’ office has alleged the former president reaped millions in tax benefits by inflating the potential development value of a landslide-prone driving range whose air rights he then donated as a conservation easement.

Moving eastward, there is Trump Tower in Chicago, the Trump International Hotel in Washington, DC, and the Trump National Doral Miami, properties where development was funded with some $300 million in Deutsche Bank loans the attorney general alleges were based on faulty statements of financial condition signed by Eric Trump.

New York is home not only to the Trump Organization but to the bulk of its assets, and there the state’s top law-enforcement officer has investigated most intently.

James’ first subpoenas focused on Seven Springs, a 212-acre woodland tract purchased by Donald Trump in 1995 for $7.5 million, and where more than a dozen years of development attempts were thwarted by tough zoning laws in the three Westchester County towns the property spans across.

The attorney general alleges Donald Trump found another way to make money from the property.

She says he exaggerated its worth by tens of millions of dollars in statements of financial condition from 2007 through 2012, when he valued it at $291 million based on development plans that local zoning officials had specifically nixed.

And she also accuses him of using a similarly “misleading” valuation in donating a 156-acre easement to a local nature reserve. In all, she wrote in January, Trump “may have obtained more than $5 million in tax benefits from misleading valuations of conservation easements” at Seven Springs and the Los Angeles golf resort.

James has also zeroed in on several Trump properties in Manhattan. These include 40 Wall Street, where Donald Trump’s interest in the 70-story skyscraper doubled in value from 2012 to 2015, and at his own triplex apartment at Trump Town on Fifth Avenue, which the attorney general alleges he persisted for years in claiming had three times its actual square footage.

The lawsuit against Trump may drop ‘in the near future’

At least four sworn, court-ordered depositions remain to be taken in the attorney general’s inquiry, each important enough that James will most likely wait for them before filing her massive lawsuit.

In addition to the yet-scheduled depositions of the three Trumps, a deposition for Trump’s longtime personal assistant Rhona Graff is set for Tuesday.

Graff, too, is a crucial witness.

The attorney general has a lot of questions for Graff, given that out of 900,000 documents turned over by the Trump Organization, only 10 came from Donald Trump’s personal business files.

James’ lawyers particularly want to ask Graff about Donald Trump’s “retention and preservation practice” for documents related to those statements of financial condition.

“Did he ever review the statement in draft form before he signed the final version each year?” the attorney general’s special counsel Andrew Amer asked in a recent filing to New York Supreme Court Justice Arthur Engoron, the Manhattan judge presiding over the probe’s subpoena-related litigation.

“Did he annotate any drafts with comments and/or questions?” Amer asked, citing another question he’d like to pose to Graff.

“If so, what happened to those drafts? In what form was the final version of the statement presented for Mr. Trump’s approval each year? How did he make his approval clear?”

Other possible delays for James’ lawsuit could come from further appeals that could be filed by the Trump lawyers or by Cushman & Wakefield, which was ordered after a protracted fight to turn over its own last batch out of tens of thousands of subpoenaed documents by this month.

“We would likely need to bring some kind of enforcement action in the near future,” Wallace, the attorney general’s senior enforcement counsel, said during a hearing in late April.

The New York state law that could doom Trump’s empire

What gives Letitia James, the first woman elected to the office of New York attorney general, the power to investigate the former president of the United States and, potentially, to padlock his business?

New York’s Executive Law, which among other things sets the powers and duties of state officials and which notably still refers to the attorney general — and its first female governor, Kathy Hochul, for that matter — using male pronouns only.

Section 63(12) of the Executive Law begins with these words:

“Whenever any person shall engage in repeated fraudulent or illegal acts or otherwise demonstrate persistent fraud or illegality in the carrying on, conducting or transaction of business–“

The words “persistent” and “repeated” pop up frequency in the hundreds of pages of court documents filed this year by the attorney general, describing the alleged pattern of misstatement in Donald Trump’s financial statements.

In those instances of “persistent” fraud, executive law authorizes the attorney general to begin a civil investigation, complete with subpoena power, and allows the official to seek fines, damages, and a state judge’s order “enjoining,” or halting, such fraudulent acts.

And where appropriate, the state attorney general can seek a judge’s order dissolving the business — the so-called corporate death penalty.

James’ team has alleged in filings as recently as last month that Trump used a misleading appraisal of his stake in 40 Wall Street to get a $160 million securitized mortgage loan in 2015, so the Martin Act may figure into James’ plans.

James has been promising something big for years, even before taking office. Seeking the corporate death penalty, and possibly millions in restitution for ill-gotten tax gains, may well be it.

“Oh, we’re definitely gonna sue him,” she vowed in an Instagram post shared November 7, 2018, the day after New Yorkers decisively elected her to be New York’s top law-enforcement officer.

“We’re going to be a real pain in the ass,” she promised, dressed in her trademark power-red and grinning broadly on that warm, windy day. “He’s going to know my name personally.”

Whitney Cummings Net Worth – How Rich is the Female Comedian?

Ruben Randall - January 4, 2023 0
Actor
Rick Aiello, the son of late actor Danny Aiello who appeared with his father in such films as Do the Right Thing, A...