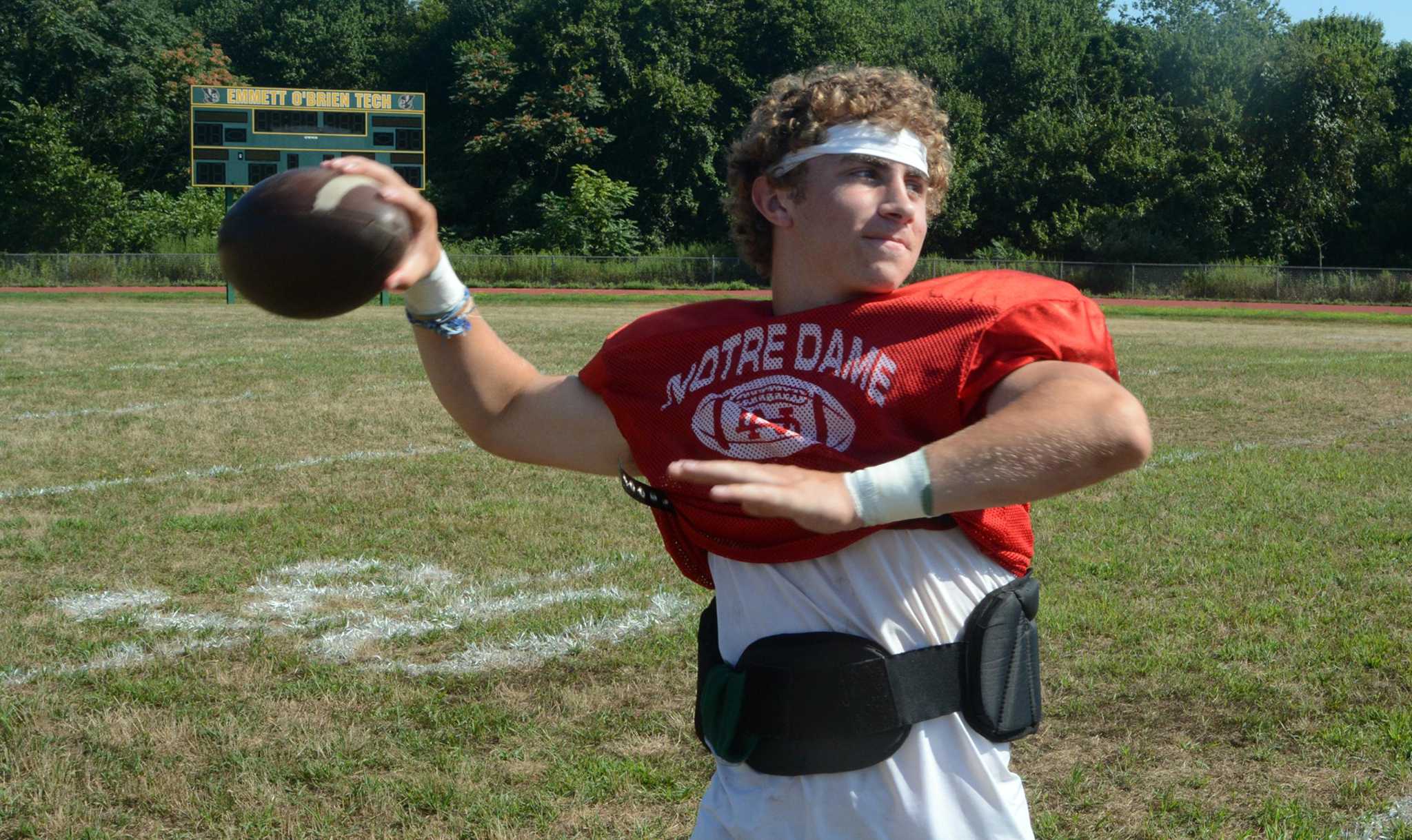 The word thrown around the Notre Dame-West Haven football program and quarterback Matt Piechota a year ago was inexperience.

After the 2020 season was cancelled due to the COVID-19 pandemic, the Green Knights had just one starter who had played at all in 2019 and Piechota was thrown into the fire at quarterback.

Had there been a 2020 season, Piechota would have played safety or wide receiver with then-senior Patrick Schreck at quarterback for the Green Knights.

And without having played a single down on the varsity level, Piechota started at Cheshire before a full house last September.

“The Cheshire game was eye opening for us,” Piechota said. “We walked in with 5,000 people there and the speed of a varsity game.”

But Piechota did have varsity sports experience at Notre Dame. He played at the varsity level in both baseball and basketball, so the pressure was nothing new to him.

Yes, he made some mistakes and so did his teammates, which led to an un-Notre Dame-like 3-7 record.

“We were very inexperienced and only had one kid who started on the varsity coming back,” Piechota said. “We didn’t have that big year of learning as sophomores. We were thrown into the fire and made a lot of young mistakes.”

Now a senior captain, Piechota is being counted on to help Notre Dame return to its past glory and the state playoffs in the new six-division setup, where it will play in Class M.

In 2021, Piechota threw for 1,750 yards in 10 games, with 14 touchdown passes and seven interceptions. He also rushed for 430 yards and seven touchdowns.

“It’s up to our senior class to turn it around,” Piechota said. “It’s our year. We don’t want last season to happen again.”

“Toward the end of the year, I tried to force things and didn’t take what the defense gave me,” Piechota said. “I need to take the short hitch and then throw the deep fade. And instead of trying to run around, I need to get six yards and slide.”

That last part is music to Notre Dame coach Joe DeCaprio’s ears. While he knows Piechota can be elusive with his legs, DeCaprio cringes every time he takes off concerned that injury is just one hit away.

“My heart is in my throat every time he runs, but he’s reading the defense,” DeCaprio said. “It’s a really hard offense to defend with a quarterback like Matt. Last year he was just trying to carry the team on his shoulders by himself when the play wasn’t really there.”

DeCaprio is hoping that won’t happen this fall.

“I have to find a way to protect him to keep him healthy, but it’s the nature of our offense,” DeCaprio said. “On every single play, he has a read where he can run or throw.”

But what DeCaprio also likes what Piechota brings off the field.

“People don’t see of how hard of a worker he is,” DeCaprio said. “He’s in my office studying film all the time and he knows our offense inside and out. But he’s also embarrassed by the press he gets and is worried about his teammates which warms my heart. I’ve been telling him it’s good for our building.”

In addition to playing three sports, Piechota is on the Student Council, carries a 4.1 grade point average and takes advanced placement classes.

As for college, Piechota is looking at playing in one of two leagues in the Northeast. He’s primarily looking at the Ivy League, which is in the FCS, and in the New England Small College Athletic Conference, which includes Trinity and Wesleyan. Holy Cross of the Patriot League also likes him.

“He’s a smart kid too,” DeCaprio said. “What kills him is that he’s six feet tall and everyone else is 6-3 or 6-4, but every time someone meets him, he’s way bigger than everyone expects.”

It’ll be the package of academics and athletics that will be the deciding factor.

“It’s not the four years I’m in college,” Piechota said. “It’s the 40 years after as my grandfather (Frank Downey) always says.”

But first he has 10 games to make memories he’ll always have.

Ruben Randall - September 8, 2022 0
TV/Movies
(CNN) – Transphobic trolls have forced a trans woman into hiding as they post personal details about her and her family online.Clara Sorrenti said...