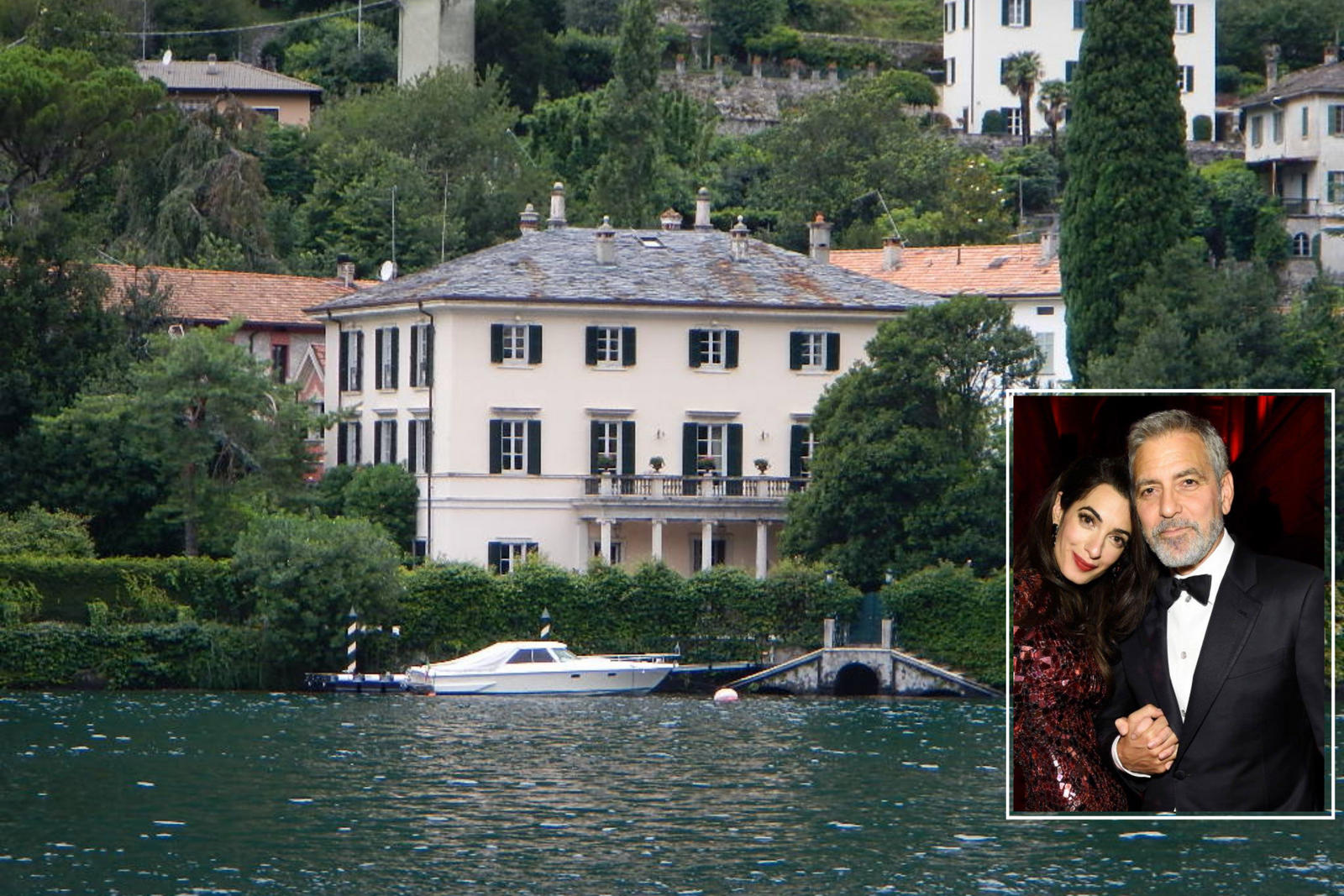 George Clooney is an Oscar-winning actor, director, screenwriter, and producer and undoubtedly one of the world’s most good-looking men. We couldn’t help but notice that the heartthrob is also surrounded by spellbinding beauty; His lawyer/activist-wife, Amal Clooney, is an icon in her own right. He has the most stunning home Villa Oleandra in the most breathtaking locale- Lake Como. We would like to delve into the historic property that helped Clooney set roots in Italy in the early 2000s-

The beautiful 18th-century Villa Oleandra is worth more than $100 million-
Italian property, Villa Oleandra, is one of four homes owned by the Hollywood A-lister that sits on Laglio’s lakefront. Purchased by Clooney in 2001 for $7 million, this 18th-century abode initially belonged to the Heinz family (makers of the most lip-smacking tomato ketchup). Nothing less than a palace, the property flaunts a 25-room home, a sprawling garage where George stores his many vintage motorcycles, well-manicured gardens, tennis courts, an outdoor pool, a gym, and a theatre. 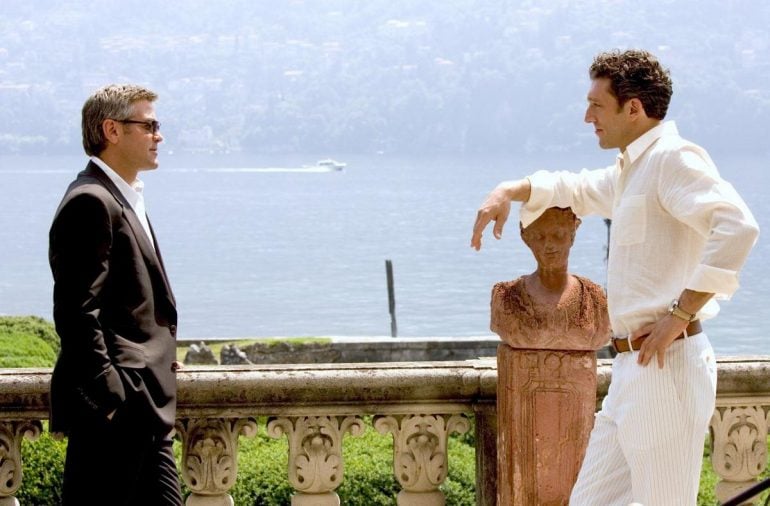 The three-story luxury property boasts a pizza room (when in Italy, cook as the Italians do) and the most awe-inspiring sunsets that can be enjoyed from the beautiful balcony or the secluded outdoor patios. The captivating Villa Oleandra is worth more than $100 million today.

Villa Oleandra played an instrumental part in the Amal-George love story-
Like a movie scene, the lady love literally walked into the life and Villa of the Ocean’s Eleven movie star. The couple met in the summer of 2013 after Amal visited George’s Lake Como residence with a mutual friend. At the time, the Hollywood actor’s agent told the 53-year-old bachelor that they had “met this woman who’s coming to your house who you’re gonna marry,” as George revealed to David Letterman years later. The rest, as they say, is history.

Privacy was paramount for attention-grabbing George Clooney-
A year later, in 2014, the couple married in the first year of meeting each other, which amped the craze of the Clooneys and their charismatic home by leaps and bounds. George purchased the adjacent Villa called Villa Margherita to help secure his privacy and the privacy of everyone staying at the Villa. By 2015, officials had to step on to help the Clooneys live in uninterrupted peace. The mayor of Laglio issued restricting orders to stop fans and paparazzi. Per Daily Mail, disturbing the Clooney’s as their Laglio residence, even from 100 meters away, would land the lawbreaker a hefty $600 fine.

The Lake Como residence hosted an assemblage of glittering guests-
It was a tradition in George Clooney’s family to spend every summer at the Villa in Como even before he married Amal. But it is not only the stylish couple and their twins who revel in the gorgeous home. The 61-year-old loves to entertain a host of friends. Villa Oleandra has enthralled former president Barack Obama, Prince Harry, Meghan Markle, Jennifer Aniston, and Matt Damon. Needless to say, a man as enterprising and renowned as George Clooney would have famous friends and prominent figures visiting his not-so-humble abode.

The massive home hosted Julia Roberts and the entire cast of 2004’s Ocean’s Twelve instead of a hotel in the town. Not just friends, film crew, and family, even newlyweds Ben Affleck and Jennifer Lopez were spotted soaking up the incredible scenery in Lake Como from the Clooney home. It only proved the unparalleled beauty of the location and the legendary house built on it, as Bennifer chose to spend quality time at Villa Oleandra out of all the great places in the world.

This gorgeous villa enchanted burglars too-
It is one thing for family and friends never wanting to leave Clooney’s beautiful home, but burglars having the time of their life at the vintage villa is downright crazy. An intruder scaled the mansion walls when the homeowners were away and enjoyed a party for one by helping himself to the wine cellar before moving onto the main house. The Hollywood heartthrobs maid spotted the unknown man with a liquor bottle and alerted the cops. The 29-year-old Romanian offender was arrested but shook Clooney nevertheless.

George Clooney came incredibly close to selling his house of dreams-
One would think the attempted theft and break into the villa must’ve coaxed Clooney to sell his historic home. However, the man was already contemplating selling the villa in 2010, when attention from the public and paparazzi grew too much. A source told Page Six, “He’s like the mayor of the lake. George loves the area and the people who live there, but is conscious of the attention he gets when he is in town. He has received a huge offer for the Villa, which he is considering, and he would buy another, less accessible property in another area of Italy.” Of course, he didn’t go ahead with the plan and now enjoys the majestic estate with his wife Amal and twins Ella and Alexander.

The gigantic house was a significant draw for charity-
That George Clooney is a brilliant man is no secret. Not only is he among Hollywood’s highest-paid actors, but the man is also a successful writer, director, and producer. The co-founder of the tequila brand Casamigos Tequila made money even off the interest his Lake Como home generated. Per The Richest, Clooney teamed up with Omaze in 2019 to pick a winner and their plus one to be flown to Italy and put in a 4-star hotel. The star offered a once-in-a-lifetime chance and meal with him and his wife, Amal Clooney. The proceeds were donated to The Clooney Foundation for Justice.

See also  20 Celebrities Whose Names Aren’t What You Think

Road Work on U.S. 93 Between Shoshone and Richfield Starts in Apr

Twitter Blue rolls out in India, likely to cost ₹719 per...