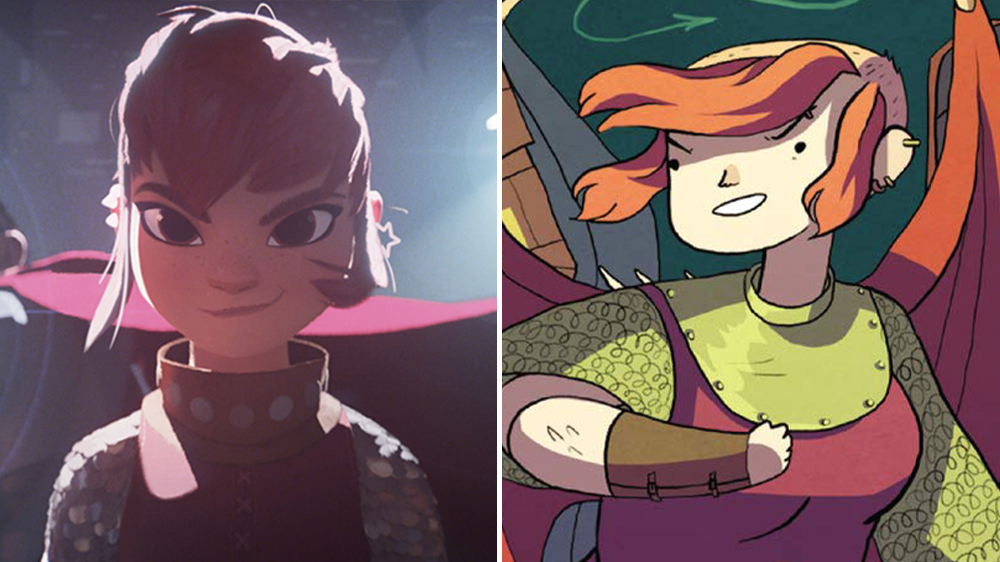 After Disney shut down Blue Sky Studios in 2021, it seemed all hope was lost for the highly anticipated animated feature “Nimona,” based on indie darling comic series from creator ND Stevenson’s comics of the same name. But fear not, as Netflix announced that it will release the previously scrapped film in 2023, with Chloë Grace Moretz (“Kick-Ass”), Riz Ahmed (“Sound of Metal”) and Eugene Lee Yang (“Spring Bloom”) in the leading roles.

“Nimona’s always been a spunky little story that just wouldn’t stop,” Stevenson wrote in a tweet Monday. “She’s a fighter … but she’s also got some really awesome people fighting for her. I am excited out of my mind to announce that THE NIMONA MOVIE IS ALIVE.”

First look at the animated ‘Nimona’ movie from Netflix and Annapurna. Courtesy of Shapeshifter Films.
Courtesy of netflix

From Annapurna Pictures and Netflix, the animated feature will follow the story of shape-shifting teenager Nimona (Moretz), the only person who can prove the innocence of wrongly convicted Knight Ballister Boldheart (Ahmed). The film is directed by Nick Bruno and Troy Quane (“Spies in Disguise”), set in a techno-medieval landscape where magic and technology combine to create a “world unlike anything animation has tackled before,” according to Netflix’s press release. “This is a story about the labels we assign to people and the shapeshifter who refuses to be defined by anyone.”

After gaining a rabid following online, the full “Nimona” story was published as a “New York Times” bestselling graphic novel by HarperCollins in 2015. Twentieth Century Fox Animation acquired the rights the same year, with Marc Haimes as screenwriter and Patrick Osborne set to direct. After Disney acquired Fox and Blue Sky, the film and its home studio were left on the cutting room floor.

The “Nimona” comics are beloved for their LGBTQ themes and storyline, following a titular heroine who refuses to be defined by any gender or appearance. In the midst of the ongoing “Don’t Say Gay” controversy at Disney, former Blue Sky staffers told Business Insider last month that Disney executives took issue with a same-sex kiss in the film. The kiss, between Boldheart and fellow knight Ambrosius Goldenloin (Yang), was eventually included in a reel, but Blue Sky closed down soon after.

Stevenson also developed and executive produced DreamWorks Animation’s 2018 series “She-Ra and the Princesses of Power” for Netflix, another animated story with queer themes. The show was a hit, winning the GLAAD Media Award for outstanding kids and family programming in 2021.

Daniel Radcliffe Calls Weird Al Movie “One of the Most Fun Jobs” of His...

Ruben Randall - July 12, 2022 0
Celebrity
Surprise has been one of the sharpest arrows in Jeff Beck's quiver for more than six decades now. From his comings and goings...

The Russo Bros. Want to Do an ‘Experimental Musical’ With The...