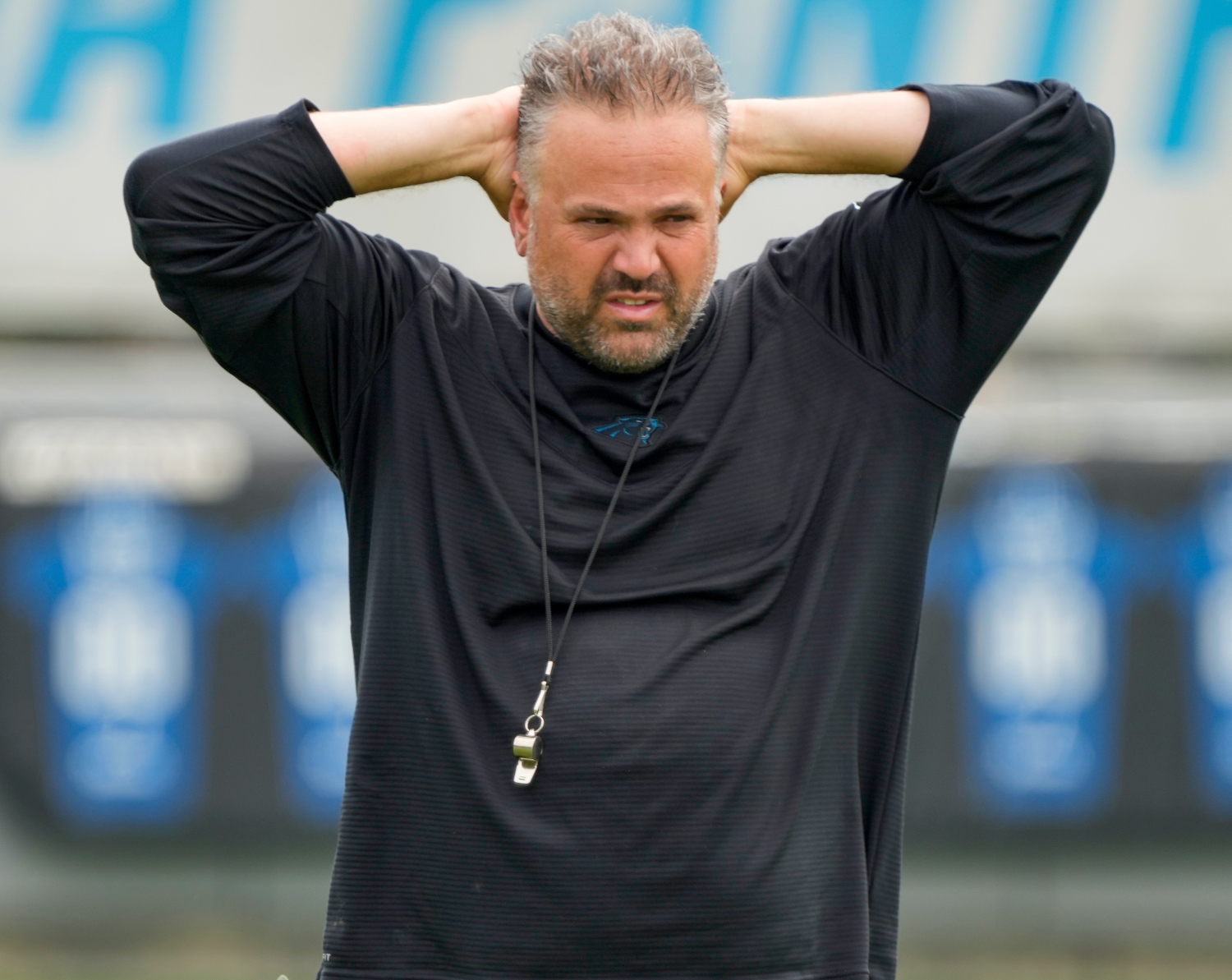 NFL Offseason – Baker Mayfield tries to save the Carolina Panthers from themselves. Marcus Mariota must stay healthy enough to hold off Desmond Ridder. The Tampa Bay Buccaneers must make sure that their kicking situation doesn’t become Tom Brady’s Achilles heel. And the New Orleans Saints are out to prove their doubters, creditors, and people who scream “OMG that dude threw 30 interceptions the last time we saw him!” wrong. Walkthrough’s 2022 NFC South Training Camp Preview will get you ready for all of the preseason action, from camp battles to joint practices to preseason games that might actually be worth watching.

Heading Into Camp: Falcons fans—bless their traumatized, delusional souls—seem to think that their team will be competitive in 2022. The rest of us will just be watching to determine what sort of roster Arthur Smith can spackle together and whether Desmond Ridder is a viable quarterback of the future. Oh, who am I kidding? The rest of us won’t be watching at all.

Camp Battles to Watch: Ridder vs. Marcus Mariota won’t really be a competition. Mariota will remain the starter until he gets injured stepping off a curb or reaching for something on a high shelf, then Ridder will get an extended audition. At least both quarterbacks are easy to root for.

Any job not held by Kyle Pitts, AJ Terrell, Jake Matthews, or Grady Jarrett should be up for grabs. The trouble is that the Falcons have zero depth and little interesting young talent behind their weak starters. Jalen Mayfield is still expected to start at left guard, for heaven’s sake.

Newcomer to Obsess Over: Falcons fans may think the team is deep at the skill positions because they are double-counting Pitts as both a tight end and a wide receiver and Cordarrelle Patterson as both a running back and a wide receiver. In reality, their receiver corps is rice-paper thin and they will need a major contribution from Drake London right away. A best-case scenario for the Falcons: Pitts and London establish themselves as a credible 1-2 punch of playmakers for Ridder or whomever the Falcons draft in 2023. It will also help if fifth-round pick Tyler Allgeier can provide a little Michael Turner-type thunder so Patterson can be used more as a change-up than a battering ram.

Circle-It Date: Falcons-Jets on ESPN on August 22 should give us an extended look at Ridder, London, and Allgeier. After that, we can safely ignore the Falcons until the 2023 NFL draft.

Heading Into Camp: No one wants to be here.

Everyone will breathe a sigh of relief when this let’s-mix-stuff experiment blows up. Until then: smile for the team photo!

Camp Battles to Watch: The Panthers roster consists of a handful of truly exciting young players (Brian Burns, DJ Moore, Jaycee Horn, a few others) and lots of guys who should be in the USFL. As such, the only real camp battle of interest is Rhule vs. Inevitability.

Tepper saddled Rhule with McAdoo as a designated grownup-in-the-room and potential midseason replacement. He insisted on Mayfield so Rhule couldn’t play the “golly gee, give me time to develop Matt Corral” card. Rhule will spend training camp trying to assert his authority and fast-track Mayfield while avoiding obvious own-goals, all the while knowing a 1-3 start might sink him. Can he do it all while maintaining his nice-guy/schlubby genius persona? Now that’s some compelling human drama, folks.

Newcomer to Obsess Over: Corral is exactly the sort of pesky pepperpot who scrambles and RPOs his way into the hearts of fans (and teammates, and coaches who desperately need to look like they are doing something, and not-at-all meddlesome owners) and snatches a job away from a flailing veteran. A healthy Mayfield should have no trouble outperforming Corral, but a healthy Mayfield will also be the darling of the free-agent market in 2023. So add “develop Corral without making it look like a quarterback competition” to the Rhule/McAdoo to-do list.

Returnee to Obsess Over: Christian McCaffrey was getting +750 odds for Comeback Player of the Year at press time, fourth behind Derrick Henry (+300, not worth it, don’t do it), Jameis Winston (+550, maybe) and Michael Thomas (+700, don’t touch it until you have seen him run a live drill). The fantasy community expects McCaffrey to operate out of the slot more often after two injury-ruined years, even though neither McCaffrey nor Rhule thinks that’s a good idea. Walkthrough thinks McCaffrey is Skinny Saquon Barkley and has penciled him in for lots of 15-carries-for-40-yards, five-catches-for-30-yards Sundays. But our KUBIAK projections disagree. Maybe he’ll turn into Deebo Samuel—or back into McCaffrey—after Rhule is fired in October.

Circle-It Date: The Patriots will host the Panthers for joint practices on August 16 and 17. It will be a great opportunity for the Panthers to take the Mayfield show on the road while Bill Belichick scouts all the players he will pilfer as soon as the Panthers perform their inevitable regime change.

Heading Into Camp: Like The Office without Steve Carell, the Saints bravely soldier on into another year without Drew Brees, promoting minor characters into larger roles and pretending that little if anything has changed. Like The Office, the Saints have suffered a significant dip in quality, but they are still better than much of what is on network television, and they’ll keep telling stories about Dwight (Jameis Winston), Pam and Jim (Cameron Jordan and Demario Davis), and Andy (Taysom Hill) as long as someone keeps writing checks. But the heart and soul of the franchise is gone, so we’re tuning in more out of habit and curiosity than excitement.

Camp Battles to Watch: The Saints drafted Northern Iowa tackle Trevor Penning 19th overall to replace Terron Armstead (Dolphins) at left tackle. The rumblings out of Metairie, however, suggest that Penning is more of a project than anticipated. James Hurst, a solid multi-position substitute, will likely start unless Penning’s lightbulb flickers on quickly.

At guard, Andrus Peat is returning from a pectoral injury that erased much of last season, while 2020 first-round pick Cesar Ruiz is still shuttling between guard and center. Calvin Throckmorton filled in at both guard positions last season and was pretty awful, while former Chargers first-rounder Forrest Lamp arrives to provide either a push for Ruiz or insurance for the oft-injured Peat. Ruiz and Peat are the likely starters, but there are several variables at play.

Newcomer to Obsess Over: Tyrann Mathieu was born and raised in New Orleans, and he returns home with a reputation as one of the NFL’s most versatile high-impact defenders. He also lingered on the free-agent market for a long time, in part because he’s not the easiest guy in the universe to coach, in part because Mathieu’s “versatility” requires coaches to carve out a very specific set of roles for him. The murmurs suggested that Mathieu was still in the early stages of learning Dennis Allen’s playbook as of minicamp. That’s fine for now. But the Saints are gonna need the real Honey Badger in 2022, not an aging safety who can almost still shut down slot receivers.

See also  Who is Lamar Odom and what’s his net worth? – The US Sun

Circle-It Date: Saints camp opens for veterans on July 26. If we haven’t seen a GIF of Michael Thomas running an actual route and catching a pass from Winston by August 1, abandon ship on any Saints “Over” prop bets.

Heading Into Camp: Don’t look for much excitement in late July or August. Tom Brady and his Howlin’ Commandos will probably be getting as many “veteran days” as practices days. Meanwhile, television talk-show personalities will do their darndest to manufacture some drama out of the Brady-Todd Bowles-Bruce Arians relationship, because soap-operatic tiffs are spicy, and the much more likely reality (Arians took a cushy desk job because he’s too old to for Florida summer and wanted to ensure Bowles got an opportunity) is both unthinkable and unclickable.

Kicker is where the real action’s at. Former Lou Groza Award winner Jose Borregales will challenge Ryan Succop after spending a year on the practice squad. Fourth-round punter Jake Camarda (Georgia) will add intrigue as the new holder. The Bucs are scraping cap nickels and dimes, which is why they may end up relying on novice specialists during a Super Bowl run. Fun stuff!

Newcomer to Obsess Over: The Buccaneers added Akiem Hicks to replace Ndamukong Suh? Now that’s just unfair. Hicks and rookie Logan Hall (Houston) are going to add a new dimension to the Buccaneers’ defensive fronts, offsetting the losses of Suh and Jason Pierre-Paul.

Circle-It Date: Monday, August 29. That’s when training camp and the preseason are over and Rob Gronkowski can safely un-retire, having skipped all the extra sweaty/boring parts.

‘Racism Always Has Time’ – Amanda Seales on Discrimination Amid Russian/Ukraine...

Ruben Randall - March 2, 2022 0
Actress
Amanda Seales (screenshot) *While taking to her Instagram, Amanda Seales calls out and condemns global racism amid the current war between Russia and Ukraine. In...