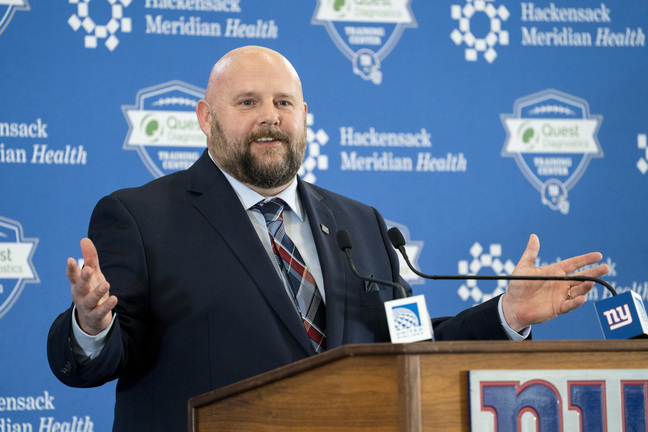 When the calendar flips to April, few storylines attract more chatter than quarterbacks who could be first-round selections.

Approaching the 2022 NFL draft, the Carolina Panthers, Atlanta Falcons and Seattle Seahawks are among the teams both holding a top-10 draft pick and in need of a signal-caller. Carolina hasn’t had a franchise QB since mid-2010s Cam Newton, while Atlanta and Seattle traded Matt Ryan and Russell Wilson, respectively, this offseason.

In recent media availabilities, none of the organizations danced around the all-too-clear reality, either.

“We do need a quarterback,” Panthers general manager Scott Fitterer said, per Darin Gantt of the team’s official site. “And at some point you have to take a shot, especially in the top 10.”

And the New York Giants loved hearing all of that.

If any top-10 trade is manufactured during the 2022 draft, the Giants hold the most ideal positions for a swap and won’t necessarily miss out on landing their top prospect, either. It’s practically the perfect combination for a rebuilding team.

New York currently owns the fifth and seventh overall picks, bookending Carolina (sixth) and preceding both Atlanta (eighth) and Seattle (ninth) in the opening round.

Not only are the Panthers, Falcons and Seahawks side-eyeing each other, though, they’re also monitoring the chances of a different team soaring into the top-10 conversation. In particular, the threats are the New Orleans Saints (18th) and Pittsburgh Steelers (20th). More teams could be thinking about it, too.

The unknown is how each franchise rates those prospects. And that’s exactly where the Giants’ advantage lies.

NFL Network’s Cameron Wolfe recently said Carolina has a “clear top three” of Willis, Pickett and Corral, adding that Willis has attracted the “most buzz” among the trio.

Let’s run that hypothetical. If the Panthers are set on Willis, that creates an ultimatum for any other team focused on the Liberty product. Either jump higher than Carolina at No. 6, or you’re not getting him. Landing any top-five selection is never cheap, but the prime outcome is trading the least amount of assets. So, get as close as possible. And that would be No. 5.

Provided the Giants are comfortable with at least six prospects—which is a hilariously low bar—parting with that No. 5 selection should be no problem. They simply need one quarterback drafted to keep an optimal choice at No. 7, and a trade should net nothing less than an additional first-round pick and likely a bit more.

And if nobody leaps the Panthers for QB1, whomever that may be, New York will select a top-five prospect. Hardly a bad result.

Play out that hypothetical, too, and the Giants remain in a great spot.

See also  As an Art Advisor, I've Watched 'Meme Art' Destroy All Logic in the Art Market. Here's What We Can Do About It

If Willis, for consistency’s sake, is off the board, the stress of missing out on a QB becomes greater. The draft is littered with examples of first-round trades for quarterbacks. Any of Seattle, New Orleans, Pittsburgh or a dark-horse option like the Tennessee Titans may begin to feel that pressure and want to jump ahead of Atlanta—and Seattle, for the latter group.

The cost of the No. 7 pick is slightly less than No. 5, naturally. Still, the return would likely include an extra first-rounder for the Giants. At this stage of the rebuild—and especially recognizing their own possibility of QB hunting next offseason—continuing to stockpile picks is worth strong consideration.

Look, there is no guarantee the Giants trade either pick.

The opportunity to secure a pair of top-seven prospects and their cost-effective contracts is highly advantageous. New York might not receive an agreeable trade offer. Perhaps the run on quarterbacks starts later than anticipated. Any number of possibilities exist that may quiet this scenario on draft day.

However, in the final moments leading up to the draft—and, most notably, the final seconds of the Giants being on the clock—they command a pivotal spot in this annual storyline.

The Giants aren’t necessarily guarding the door to first-round quarterbacks. But they hold a couple of very important keys.

Ruben Randall - August 14, 2022 0
Money
Not everyone hides their money. Some of them even utilize their financial situation to garner recognition and, as a result, more money. Hard Rock...