“This must be what they mean by ‘poetic justice.'” Studiocanal UK has revealed a new official UK trailer for the 4K restoration of this action crime thriller called Raw Deal, which was originally produced by the one-and-only Dino De Laurentiis. The film was released in the summer of 1986, but end up flopping, which lead to De Laurentiis’ going bankrupt and selling off the rights of Total Recall (both are with Arnold). Dismissed from the FBI, Arnold Schwarzenegger stars as Kaminsky, who’s contacted by his old boss. Determined to find his son’s killler, Shannon needs Kaminsky and offers to re-instate him if he is successful. Kaminsky assumes a new identity and moves to Chicago where he ingratiates in the underworld. To be successful, it is vital he’s accepted by the gangsters. Also stars Kathryn Harrold, Darren McGavin, Sam Wanamaker, Paul Shenar, Steven Hill, and Ed Lauter. The new trailer also comes with new art by French designer Flore Maquin (seen below). The restoration was produced in 2022 by Studiocanal using a combination of original 35mm elements scanned in 4K 16-bit. Scratches, physical damage and dust were erased frame by frame. Color grading from VDM Laboratory – France. Better than ever before!! This film looks totally crazy. 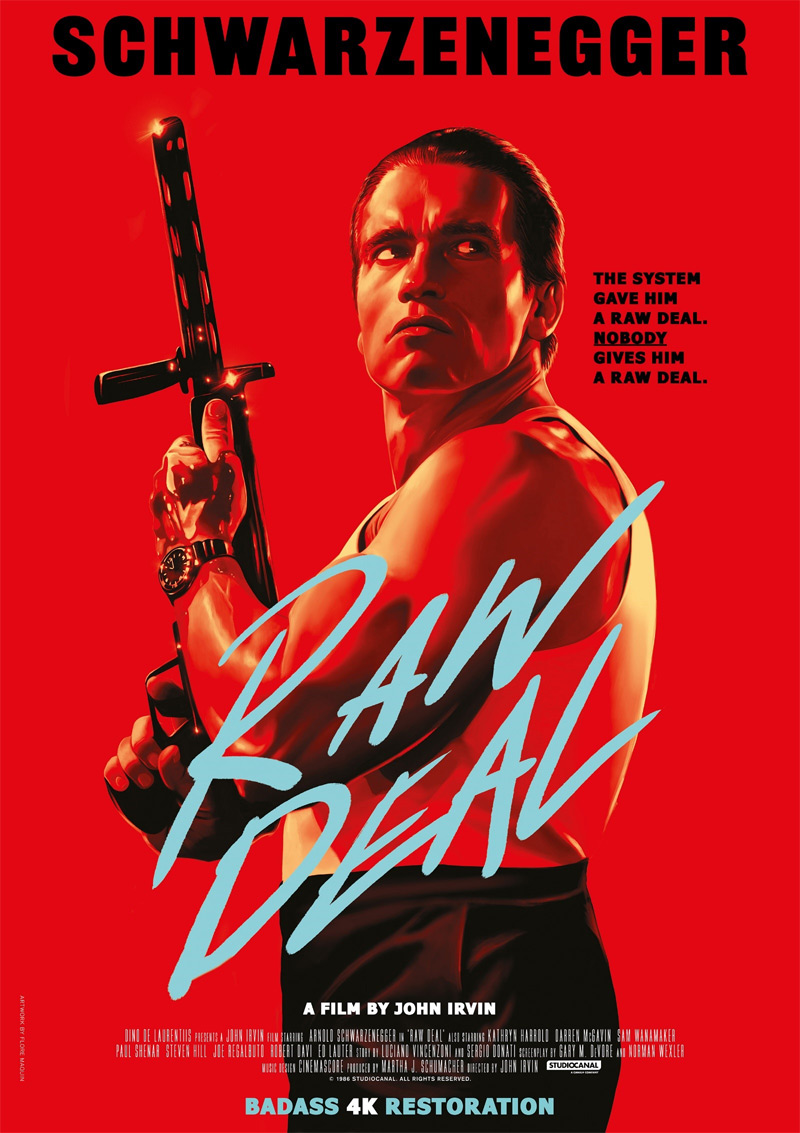 Dishonoured and forcibly retired from the FBI on grounds of excessive brutality, Mark Kaminski (Arnold Schwarzenegger) is demoted to being a Sheriff in a small town, where his wife heads straight for the bottle and his career goes nowhere. However, when the son of an old friend, Agent Harry Shannon (Darren McGavin), is killed whilst guarding a mob informant against the criminal outfit led by Luigi Patrovita (Sam Wanamaker), Kaminski is given a second chance. Assigned with infiltrating and bringing down the mobsters from within without the protection of the FBI, Kaminski assumes a new identity and must resist the temptations of the mysterious Monique (Kathryn Harrold) and maintain his cover, with his eyes on the biggest prize of all: reinstatement and a return to the law enforcement life that was taken away from him.

Raw Deal is directed by British filmmaker John Irvin, his fifth feature film at the time, made after The Dogs of War, Ghost Story, Champions, and Turtle Diary, before he would go on to direct Hamburger Hill. The screenplay is by Gary DeVore and Norman Wexler, from a story by Luciano Vincenzoni and Sergio Donati (Sergio Leone’s writers). Produced by Martha Schumacher. The film was originally produced so that Dino De Laurentiis could inject some quick cash into his long gestating project Total Recall, a film for which De Laurentiis had owned the rights, and one in which Schwarzenegger would later star in. Partly due to the poor box office performance of Raw Deal, De Laurentiis would eventually file for bankruptcy and the rights to Total Recall were sold to Carolco Pictures. At the time, Schwarzenegger was still under contract with De Laurentiis for a number of Conan the Barbarian sequels, and in exchange for dissolving this multi-picture agreement, Schwarzenegger agreed to star in Raw Deal. Studiocanal UK will debut the new Raw Deal 4K restoration on Blu-ray / DVD later this year. No US release date is set yet. Anyone a fan of this one already?