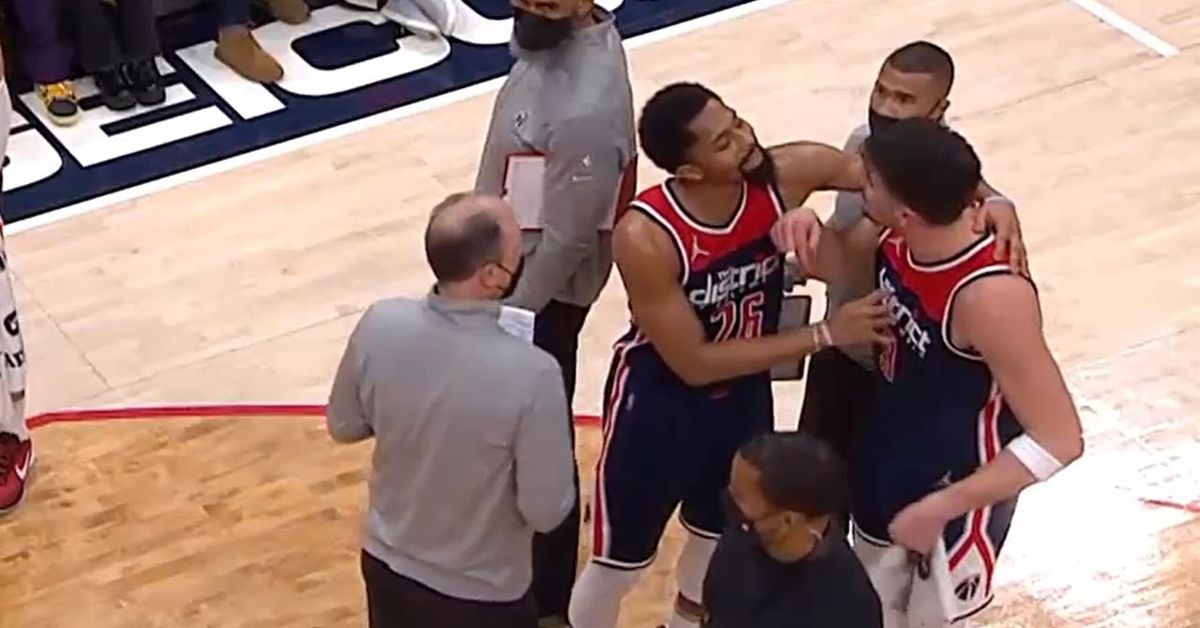 It’s quite impressive how quickly the rise and fall of an NBA career can be.

Remember Ian Mahinmi? In 2016, the French center signed a four-year $64 million contract, only to sit on the bench most of the time for the next few years as he was among the league leaders in fouls/36 minutes. During those four long years, he mostly branched out as a fashion model and designer. And he watched a lot of international soccer on TV.

Somehow, someway, then President of Basketball Operations Ernie Grunfeld and his sidekick Tommy Sheppard found a way to detect a brief, ephemeral, short, peak in a certain player’s career and make a big bet that he would be a star, only to see things blow up in their faces afterward.

That ended, finally in 2020. This was following half a season that was Mahinmi’s best (2015-16 in Indiana) but following multiple other seasons that were mediocre and, famously, at a point where Mahnimi was not even seriously considered for the French men’s national team. (BTW, here’s Jake Whitcare’s piece on Mahinmi’s honorary place in that infamous 2016 free agency class.)

But, then, as if the lesson was not learned, the Wizards did it again. Just months after Mahinmi left they signed Davis Bertans to a big day — only this time (Pourquoi pas !) — for a grand total of $80 million over FIVE years!

So far, since signing Bertans, he is quickly becoming another bust from Europe, and another salary-cap bust for the Wizards and their goals.

There is an important difference though between Mahinmi and Bertans which I’ll discuss next.

The cultural reboot of the Wizards

When now-President of Basketball Operations Tommy Sheppard executed the famous John Wall for Russell Westbrook, Sheppard’s main selling point was rebooting Washington’s culture. This was going to be a hard-working honest collection of players with no more locker-room drama of the Wall-Beal-Porter-Gortat era.

I understand that the Bertans signing partially made sense at the time. It was supposed to complement Wall and Beal and fit into then-head coach Scott Brooks’ no-defense schemes.

Bertans showed bad sportsmanship by showing up to start his bloated contract back in 2020 being completely out-of-shape. (Reportedly, his agent shut him down during the bubble in Orlando and to prevent an injury during free agency.)

Bertans shows absolutely no grace in his game. He is clumsy, forces predictable contested difficult shots. Defenders know he will not drive, simply since he does not have the skills.

They also sometimes come to help on him since they know he is programmed to just catch and shoot that brick, whether or not a teammate is open or not nearby. This further reduces his accuracy which this season has been an abysmal 29.7 percent, way below his career average of 40.1 percent.

Finally, and this is new, at least to me, Bertans is not a great veteran to have in the locker-room, picking up a meaningless fight with a second-year player following his (Bertans’) poor basketball decision. Just watch this, though it’s hard to believe it actually happened, during garbage time in the loss to the 76ers:

And, this, in essence, is the only difference between Bertans’ and Mahinmi’s contracts (forget the extra year and the fact that the Wizards did have Bertans for a season before his current contract for a moment).

During the most difficult times of the Wall/Beal/Porter locker-room drama, Mahinmi was always that cheerful experienced veteran that everyone liked (I can attest to that as well. BTW, you can hear Candace Buckner and Jake discuss his locker-room presence in Indiana).

Bertans, on the other hand, seems to be the prototypical, frustrated selfish teammate that picks up a fight with a young player on his own team.

This is shocking since I can’t remember even once that soft-tempered Deni Avdija had any arguments with any of his teammates at ANY level (high school, national team, EuroLeague).

A month ago, it seemed like perhaps things might still improve. In fact, Bertans’ outside shooting percentages have (going from nearly 27 to nearly 31 percent). This is perhaps good for the otherwise plummeted trade value of the Latvian Laser.

Yet, everything seems to indicate that it’s time to sell (albeit low) on Bertans’ stock and move on. The Wizards can’t afford to wait much longer, and they really shouldn’t wait for Bertans’ contract to come off the books in 2025. Sure, they’ll have to take some bad contract in exchange (hopefully expiring earlier), and probably give out a pick or two.

Though you never know, perhaps a desperate GM like Rob Pelinka of the Lakers could come by in dire need for some perimeter shooting around LeBron James and perhaps be able to involve a third (or fourth) team. If the damage is only second-round picks it should be seriously considered.

Either way, It’s one thing when Bertans is underwhelming on both sides of the court. So was Mahinmi not long ago. It’s quite another when Bertans is harming team chemistry. Le Roi de Normandie, for all his faults, kept everyone together.

As this piece comes to a close, remember this: it’s hard to fool the San Antonio Spurs (the team that traded Bertans to D.C.) and Gregg Popovich as far as trades go. A player that blossoms there under very particular schemes is far from guaranteed to do the same elsewhere long term.

Ruben Randall - March 16, 2022 0
TV/Movies
Spring in Wisconsin is an interesting time. There are absolutely beautiful days when all you want to do is get outside. And there are...

Here’s How To (Correctly) Clean Your House From Top To Bottom...