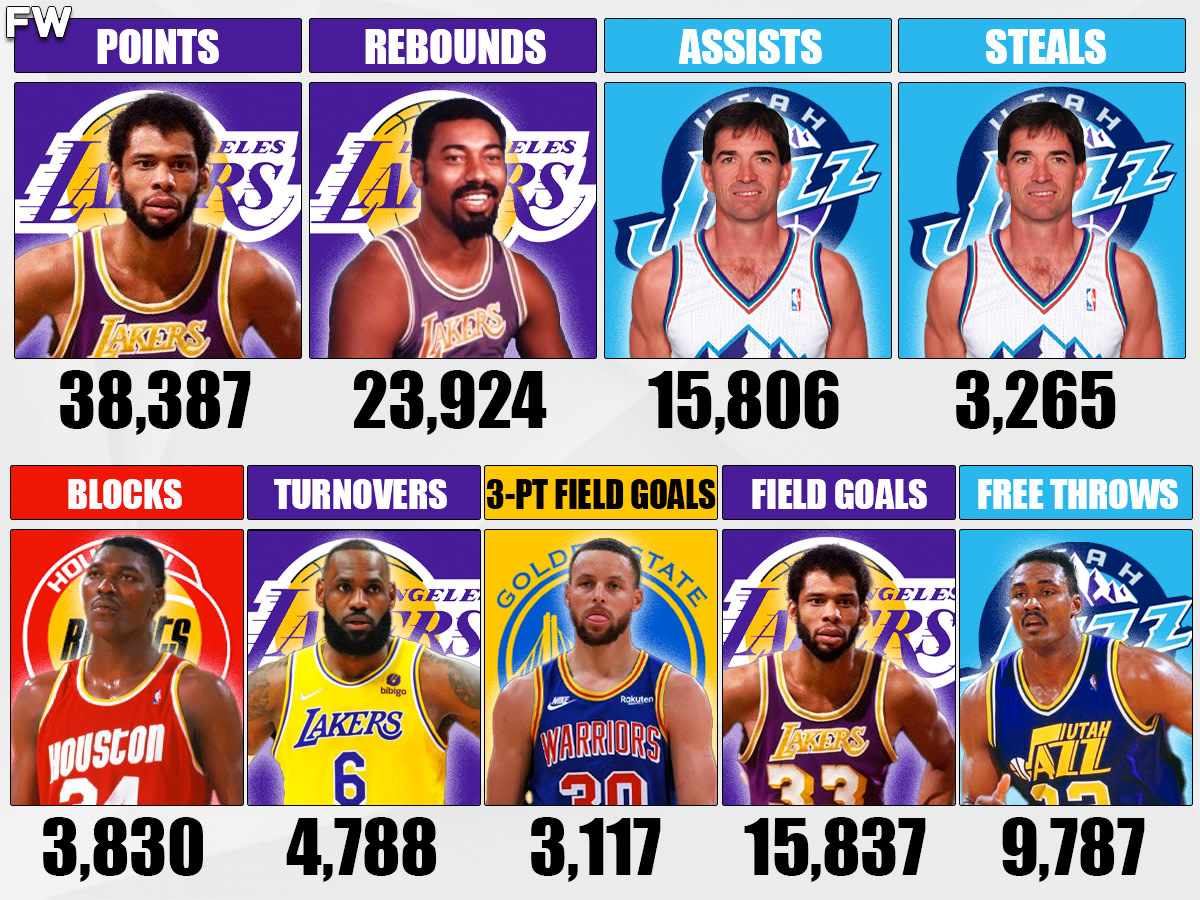 The NBA owns 75 years of experience. Over time, there have been great players that have put together a ton of statistics. These players were special enough to claim a record. Some records have lasted longer than others. In today’s league, we have some players that are making their way towards claiming the record themselves.

As LeBron James, Chris Paul, and Stephen Curry enter the later stages of their career, these players are making a run at history this season. This could be a special season when it comes to etching their names in the record books. As for Curry, it will be a matter of how far he can stretch his record.

These are the all-time totals record for the NBA.


For now, Abdul-Jabbar owns this record, but he will likely see the same fall by the end of the upcoming season. The first three years of his career saw Abdul-Jabbar lead the league with total points. That included five straight seasons of at least 2,000 points or more. His career-high of 2,822 points came during the 1971-72 season. That was part of nine total seasons that featured at least 2,000 points or more.

LeBron James is coming for that record. Last year, James scored 1,695 total points. If he can be around that total, he will have no problem passing Abdul-Jabbar in 2023. James owns 10 seasons of scoring at least 2,000 points. His career-high of 2,251 total points came with the Cavaliers during the 2017-18 season.

There are only two players with at least 20,000 career rebounds. During their playing days in the 50s, 60s, and 70s, either Wilt Chamberlain or Bill Russell were leading the league in rebounding. The greatest to ever do it was Chamberlain, who led the league in rebounding totals 11 times. That included four straight seasons to open his career, which also included a season where he scored over 4,000 points and 2,000 rebounds during 1961-62.

Chamberlain secured at least 2,000 total rebounds two times in his career. He had over 1,900 five other times as well. Chamberlain had one season where he did not record at least 1,000 rebounds in a season, which was the 1969-70 season, when he played just 12 games due to injury. Outside of that, Chamberlain’s career rebounding average of 22.89 remains an NBA record.


The combination of John Stockton and Karl Malone was historic for the Jazz but also from a statistical standpoint. When Malone retired, he was the second-leading all-time scorer. As Malone was putting the ball in the basket, it was often Stockton serving up the pass to set him up. For those efforts, Stockton remains the only player in NBA history to record over 15,000 career assists. Stockton led the league in assists for eight consecutive seasons between 1988 to 1996. That included six seasons with at least 1,000 assists in a season.

Assuming that Chris Paul plays at least two more seasons, he could go down as the second-best point guard statistically. Paul has never topped 1,000 assists in a season, but he has led the league three times. That includes reaching 700 assists or more seven times. His career high of 925 assists came during the 2007-08 season, which was his third year in the league.

Jason Kidd has come the closest to Stockton in recent years. Kidd never topped 200 steals in his career. He had over 170 steals in a season three times, including a career-high 175 steals during the 2001-02 season. That was the one time that Kidd led the league in total steals.


Olajuwon was a shot-blocking machine in the 80s and 90s. Olajuwon’s first season in the league saw him record over 200 blocks in a season. Olajuwon reached at least 200 blocks or more in the first 12 seasons of his career. He didn’t stop there, either. Olajuwon reached 300 or more blocks three times, including his career-high of 376 total blocks during the 1989-90 season. Olajuwon led the league in blocks two times.

Another shot-blocker worth mentioning is Dikembe Mutombo. He was often blocking shots, which led to his finger-wagging trademark after each block to signal that the ball was not going to go in the hoop. Mutombo led the league in blocks for five consecutive years between 1994 to 1998. That included three straight seasons of 300 or more blocks.


When Karl Malone retired, he was the all-time leader in turnovers. That was until LeBron James passed him within the last few years. For both players, it does not mean that they are necessarily careless with the ball. Both players are a focal point of their offense. The ball is in their hands a ton. That can lead to double or triple teams. When that happens, a turnover will happen a time or two.


Before Stephen Curry and James Harden, it was Ray Allen and Reggie Miller. Both of those players were Hall of Famers, known for their outside shooting. Then, Curry came along and became an all-time great. Curry broke the three-point record last year and has no signs of slowing down. When he retires, he could easily pass the 4,000 mark.

Curry has led the league in three-point field goals seven times. He is the reigning back-to-back champion in made field goals. Curry is the only player to ever make at least 400 three-point field goals in a season, as his 402 during the 2015-16 season is an NBA record. As Curry pushes his record, Harden could look to be the second player to pass Allen, making both players legends in outside shooting.

By the time James retires, he could own this record as well. He is roughly 2,300 made field goals away. Last year, James made 640 field goals. If James sticks around for four to five more years and can make about 500 to 600 field goals each season, then he will catch up with Abdul-Jabbar. James has led the league in made field goals five times, including his career-high 857 during the 2017-18 season.


Malone was a career 74.2% free throw shooter. Had that percentage been just a tad higher, he might have had even more points in his career. With that said, Malone was still good enough to take advantage of the free throw line. Malone led the league in made free throws eight times. That included five consecutive years between 1989 to 1993 and then 1997 to 1999. Maleon’s best season of 703 came during the 1989-90 season.

Another Malone was at the line just as often. Moses Malone led the league in free throw attempts five times but was able to make the freest throws two times. That featured his career high of 737 made free throws during the 1985-85 season. Altogether, it’s just the pair of Malones that own more than 9,000 made free throws in a career.

The Top 3 NBA Draft Picks From 1991 To 2000: Orlando Magic And San Antonio Spurs Made The Perfect Decisions

The Most Career Points By Position: Kareem Abdul-Jabbar And LeBron James Lead The Highest-Scoring Lineup Of All Time

NBA Centers That Have Won The Finals MVP: Shaquille O’Neal Destroyed The Competition In 3 Consecutive Years

Dave Chappelle attacker’s motivation: He was ‘triggered’ with LGBT and poverty...