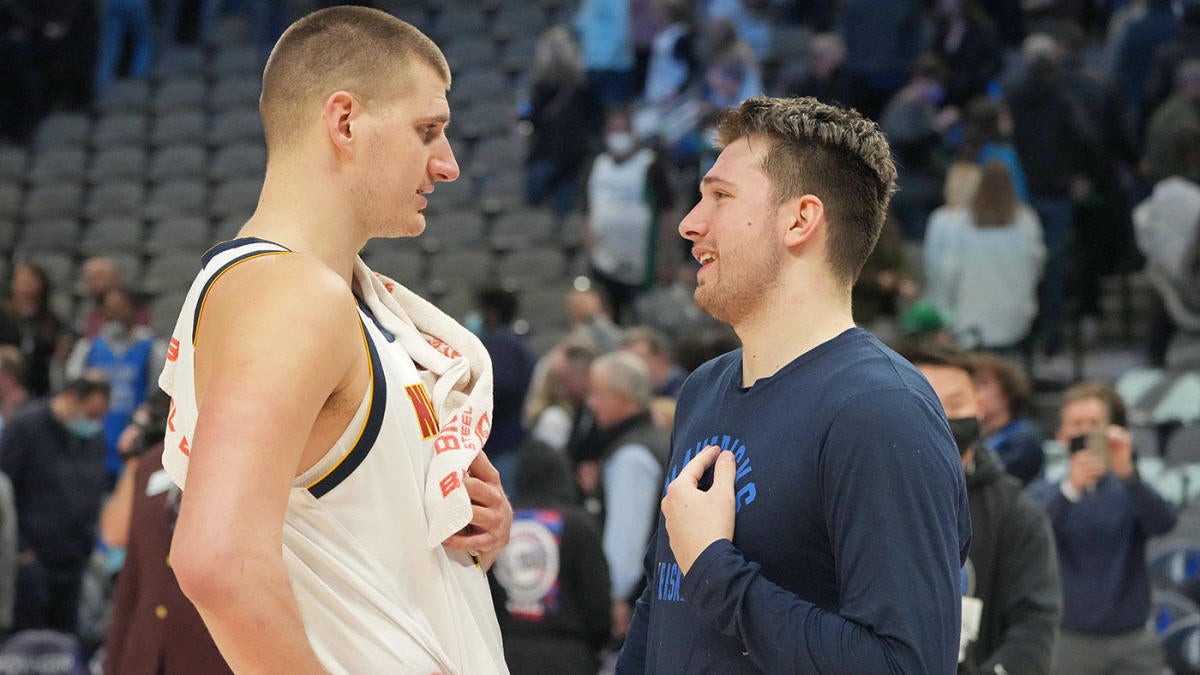 The 2021-22 NBA MVP race has a chance to wind up as the closest finish since 2004-05, when Steve Nash won with 65 first-place votes to Shaquille O’Neal’s 58. There’s not much to say about the top three candidates that hasn’t already been said. Nikola Jokic has emerged as the betting favorite, and if I had a vote, it would indeed go to Jokic.

But, man, is this tight. There is no wrong vote as long as it’s going to Jokic, Joel Embiid or Giannis Antetokounmpo. I believe that. As long as one of those three wins, and the other two finish second and third, it will be just (but I will say it’s perplexing that this isn’t a Big Four conversation that includes Luka Doncic among the main contenders, but we’ll get to that).

Ultimately, opinions will differ as to the order, but the top four I have listed here should be pretty iron clad. The fifth spot is up for grabs. As I said, my first-place vote would go to Jokic. Here are my final MVP rankings for the 2021-22 season.

Let’s forget the fact that Jokic is an advanced-stat god with the highest PER in recorded history. It’s truly ludicrous to dismiss such across-the-board ownership of these metrics as some sort of nerd-number Voodoo, but even if you are intent on taking that stance and want to focus on traditional box scores, consider that Jokic is the only player in NBA history to average at least 27 points, 13 rebounds and seven assists.

Four other players — three Hall of Famers and another two-time MVP well on his way to Springfield — have satisfied the scoring and rebounding part of that trifecta: Wilt Chamberlain, Kareem Abdul-Jabbar, Elgin Baylor and Giannis Antetokounmpo, and none of those four come close to Jokic’s insane 66.0 true shooting percentage.

Add to that: Jokic is going to be the first player in the last half century to rank in the top 10 in points, rebounds and assists per game as well as field-goal percentage (minimum 400 attempts). There’s also this:

You want total offensive production? Here’s how many points each of the top three candidates are generating per 100 possessions via assists and scoring, per PBP Stats.

If you want to go the winning route, Jokic has led the Nuggets to just two fewer wins than Embiid’s Sixers despite playing the entire season without Jamal Murray and all but nine games without Michael Porter Jr. Yes, Embiid endured the Ben Simmons drama, but he’s also had James Harden since the February trade deadline. Jokic hasn’t had anything close to a second All-Star anywhere near him this season.

Finally, it’s just the eye test for me. Putting the ball in Jokic’s hands is a guaranteed good-to-great shot, either for him or a teammate, in a way that Embiid doesn’t match. Embiid has gotten better out of double teams, but for me this is the skill that separates Jokic in what is a hair-splitting debate regarding the game’s best center: He absolutely shreds double teams. His passing gets a lot of love but it’s still not enough. Neither can be defended one on one, but the gap between Jokic’s passing and Embiid’s passing is greater than the gap between Embiid’s defense and Jokic’s defense. For me, that tips the scale.

Embiid is going to play in close to 70 games and is in line to win the scoring title while leading the Sixers to at least a top-four seed despite playing most of the season with Seth Curry as his best teammate (by the way, that’s not meant as a knock on Seth, who is fantastic in the role he fills). As I said, if Embiid wins, it will be just. We’re just about flipping a coin on this.

Removing Harden from the equation, which more or less puts Embiid and Jokic on equal ground as far as support, below are the offensive, defensive and net ratings of the Sixers and Nuggets with their respective MVP candidate leading solo-star lineups, per Cleaning the Glass.

76ers with Embiid and without Harden

Now, you pair Embiid with Harden, and the Sixers are outscoring opponents by 15 points per 100 possessions with an offensive rating north of 122, while Jokic’s Nuggets are barely treading water down the stretch of the season with a defense that is looking worse and worse.

That could swing the tide in Embiid’s favor. Let’s say the Sixers wind up No. 2 and the Nuggets fall into the play-in. In that scenario, Embiid wins the MVP, in my opinion, on the strength of a late-season flip. But right now, Jokic has just been the better player; not by much, but by enough, and Philly finishing as the No. 4 seed to Denver’s No. 6, with roughly the same amount of wins for each, isn’t enough for Embiid to overcome that slight performance gap.

Embiid might win the official scoring title, but per 36 minutes, Giannis, at 32.7, is the highest scorer in the league (by two-tenths of a point over Embiid); that’s a microcosm of how close this is. Shift the criteria a smidge from Jokic’s historic across-the-board numbers, and you’ll find that Giannis is the only player in history to average at least 29 points, 13 rebounds and five assists with a true-shooting percentage north of 60.

But again, let’s look at what Giannis has been able to do as the lone All-Star on the floor. Removing Khris Middleton, here are the Bucks’ offensive, defensive and net ratings compared to what Jokic has done as the solo star in Denver.

Bucks with Giannis and without Middleton

Now consider that this includes Antetokounmpo’s minutes alongside Jrue Holiday, who wasn’t technically an All-Star this season but is absolutely an All-Star-level player. Remove Holiday, thereby isolating Giannis as the actual only All-Star on the floor in a role similar to what Jokic has had to fill in Denver all season, and the Bucks are plus-5.2 per 100 with an offensive rating that ranks in the 36th percentile, per CTG.

Now, we’re talking about a small sample size of minutes that Giannis has played without both Middleton and Holiday — fewer than 800 total possessions, or about seven to eight games worth, per CTG. But you still get the point. Jokic has done more with less. If you think there are other data points that can be manipulated in Giannis’ favor, have at it. I’m just sticking to straight performance without the help of a second All-Star, which is as close to an equal playing field as you can dream up.

Every day I wonder more and more why Doncic isn’t more in the heart of this debate. He got off to an out-of-shape slow start and I suppose once prevailing sentiment discards you, it never fully considers picking you back up. But if you want to talk solo stars lifting their teams, look no further than Doncic, who has the Dallas Mavericks as a top-four seed just one game back of the No. 3 Warriors without anything that even resembles a second All-Star anywhere near him.

Doncic is the only 20-point-a-night scorer in the league who is also averaging at least nine rebounds and eight assists per game, and Doncic isn’t exactly scraping past the 20-point marker; he’s fifth in the league at 28.3 per night and third per 100 possessions at 39.8.

Go back and look at that table in Jokic’s section for points created per 100 possession via scoring and assists. Jokic creates the most among the top three candidates (66.32), four points per 100 fewer than Doncic, who creates 70.82 points per 100 for the Mavericks, according to PBP Stats. Doncic isn’t going to win MVP. But in my opinion, he should be a bigger part of the realistic conversation than he is. A fourth-place finish would be my bet.

A lot of people are going to scream for Devin Booker as a top-five MVP finisher. Heck, Hall of Famer Isiah Thomas and Draymond Green have both lobbied for Booker to win the award outright. I get it. Booker is arguably the best player on the NBA’s best team, and certainly one could argue that should carry a lot of weight.

But I’m going to focus on the word arguably in term of Booker’s ranking on his own team’s hierarchy; personally I think Chris Paul is more valuable. The fact that it’s even a question, for me, takes Booker out of this. If Stephen Curry and Kevin Durant watered down each other’s MVP case when they were teammates, you can bet Booker and Paul should be doing the same thing.

There is no such controversy with Tatum and the Celtics. He’s the best player. And next to Phoenix, Boston has been the best team in the league for a good while now. Ja Morant is an option here, too, but the Memphis Grizzlies star has played in just 56 games to Tatum’s 75 entering play on Thursday. Stephen Curry’s 64 games played hurts him, too, though that’s not a terribly low number.

Only DeMar DeRozan and Trae Young have scored more total points than Tatum this season, and the Celtics have outscored their opponents by a total of 638 points with him on the floor, which doubles the point differentials of Embiid and Antetokounmpo and registers more than 200 points higher than Jokic’s plus-407.

Yes, the Celtics have a lot of good players and their defense, which is a collective effort, is the biggest reason they’ve morphed into a contender. That’s why Tatum isn’t in the realistic running to win the award. That, and he flat-out hasn’t been as great as the four guys ahead of him on this list. But he’s been great nonetheless, and he deserves a top-five finish.

Ruben Randall - February 26, 2022 0
Celebrity
The glamazon we have come to associate her as, Maura Higgins, was not looking like her usual self... In fact, the 31-year-old has...