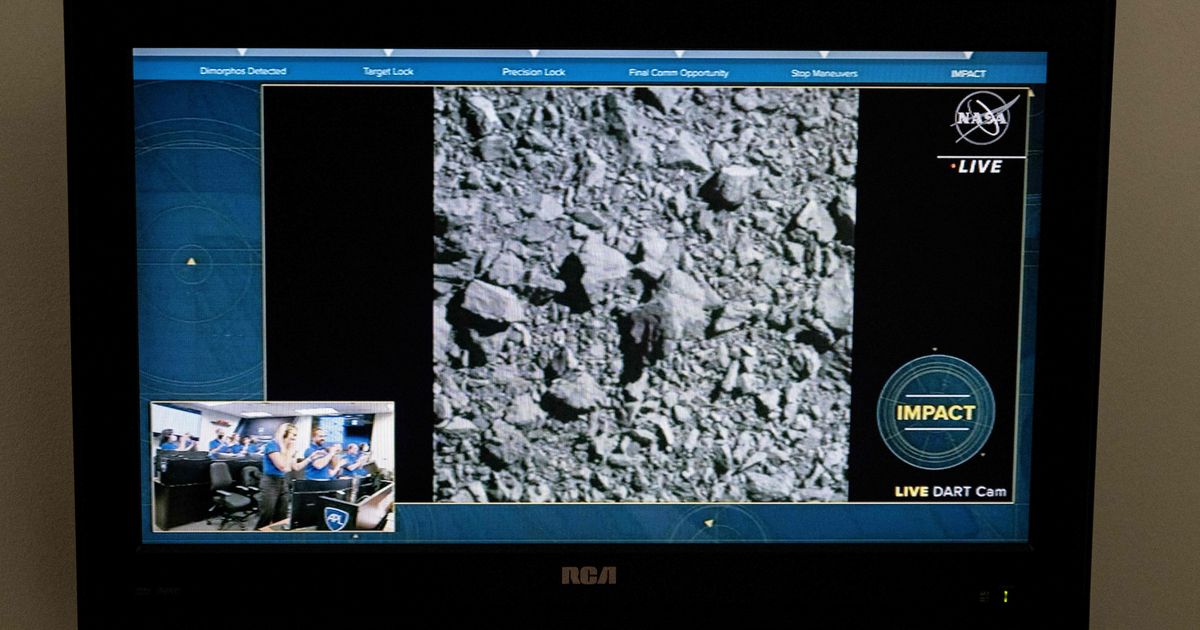 A television at NASA’s Kennedy Space Center in Cape Canaveral, Florida, captures the final images from the Double Asteroid Redirection Test (DART) as it smashes into the asteroid Dimorphos on September 26.
Photo: Jim Watson/AFP via Getty Images

NASA successfully crashed a perfectly good spacecraft into a floating rock about 7 million miles from Earth on Monday night — thus testing the first planetary defense system in human history. NASA’s goal for the $325 million Double Asteroid Redirection Test (DART) mission was to see if it could alter the course of a distant asteroid, like it might eventually have to in order to fend off an asteroid on a catastrophic collision course with Earth. An Armageddon dress rehearsal without the bad writing or Ben Affleck, in other words.

Watch the moment a NASA spacecraft collides into an asteroid 7 million miles away, with Dart plowing into the small space rock at 14,000 mph. https://t.co/5q9vuVtdc0 pic.twitter.com/49w4W7pZM1

NASA scientists broke out in cheers when the agency’s uncrewed 1,300 pound DART spacecraft made impact with the 560-foot-wide Dimorphos asteroid at a speed of over 14,000 miles per hour. DART, which had been on a ten-month voyage to hit the asteroid, was instantly destroyed. And it was all livestreamed, except for the more than a minute of lag time for the signal to travel back to Earth. The video showed the asteroids getting bigger and bigger before the screen cuts to red when the probe and its camera smashed into the surface of Dimorphos.

Congrats to the entire #DARTMission team! 🎯

DART’s DRACO camera captured the spacecraft’s final moments before it successfully crashed into asteroid Dimorphos. I am so excited to see what we learn from this impact with our international partners and ground-based observatories. pic.twitter.com/oFPf3kmK5x

I stabilized and interpolated the final moments of the @NASA DART mission to create this video of the impact. Godspeed, DART. pic.twitter.com/LR3j2QgxME

The impact (of the impact) on Dimorphos, and the larger asteroid it orbits named Didymos, remains to be seen. Scientists will be measuring how much of an effect the collision had on the two rocks, or more specifically, how much DART’s high-speed sacrifice accelerated Dimorphos’s orbit of Didymos, and how that in turn affects the course of Didymos. (To be clear, both asteroids were minding their own aimless business in space and posed no threat to Earth but made for a good target.)

Later today, DART (Double Asteroid Redirection Test) will impact its target asteroid! The asteroid, Didymos, is about 780 meters in diameter and its moonlet, Dimorphos, is about 160 meters in size. For more info, including where & when to watch, visit: https://t.co/C537TGJPYC pic.twitter.com/MDFGM5PbYd

A tiny spacecraft deployed from DART earlier this month also monitored the event from nearby, while numerous telescopes, including ones on Earth as well as the newly deployed James Webb Space Telescope, watched the crash from afar. And two years from now, the European Space Agency will launch a mission to land a spacecraft on Dimorphos and collect additional data. It’s one hell of a science experiment.

“The dinosaurs didn’t have a space program to help them, but we do,” NASA’s Katherine Calvin said ahead of the crash. Hopefully, we’ll eventually be able to deflect massive asteroids like the one that wiped them out 65 million years ago. Then again, while the dinosaurs couldn’t conduct faraway physics experiments or throw spaceships at big rocks, they never developed multiple ways to wipe themselves out either …

Daily news about the politics, business, and technology shaping our world.

By submitting your email, you agree to our Terms and Privacy Notice and to receive email correspondence from us.

Ruben Randall - September 24, 2022 0
TV/Movies
Louise Fletcher, the imposing, steely-eyed actress who won an Academy Award for her role as the tyrannical Nurse Ratched in “One Flew Over the...

Chris Pratt Admits That After 3 Years of Marriage He Can...