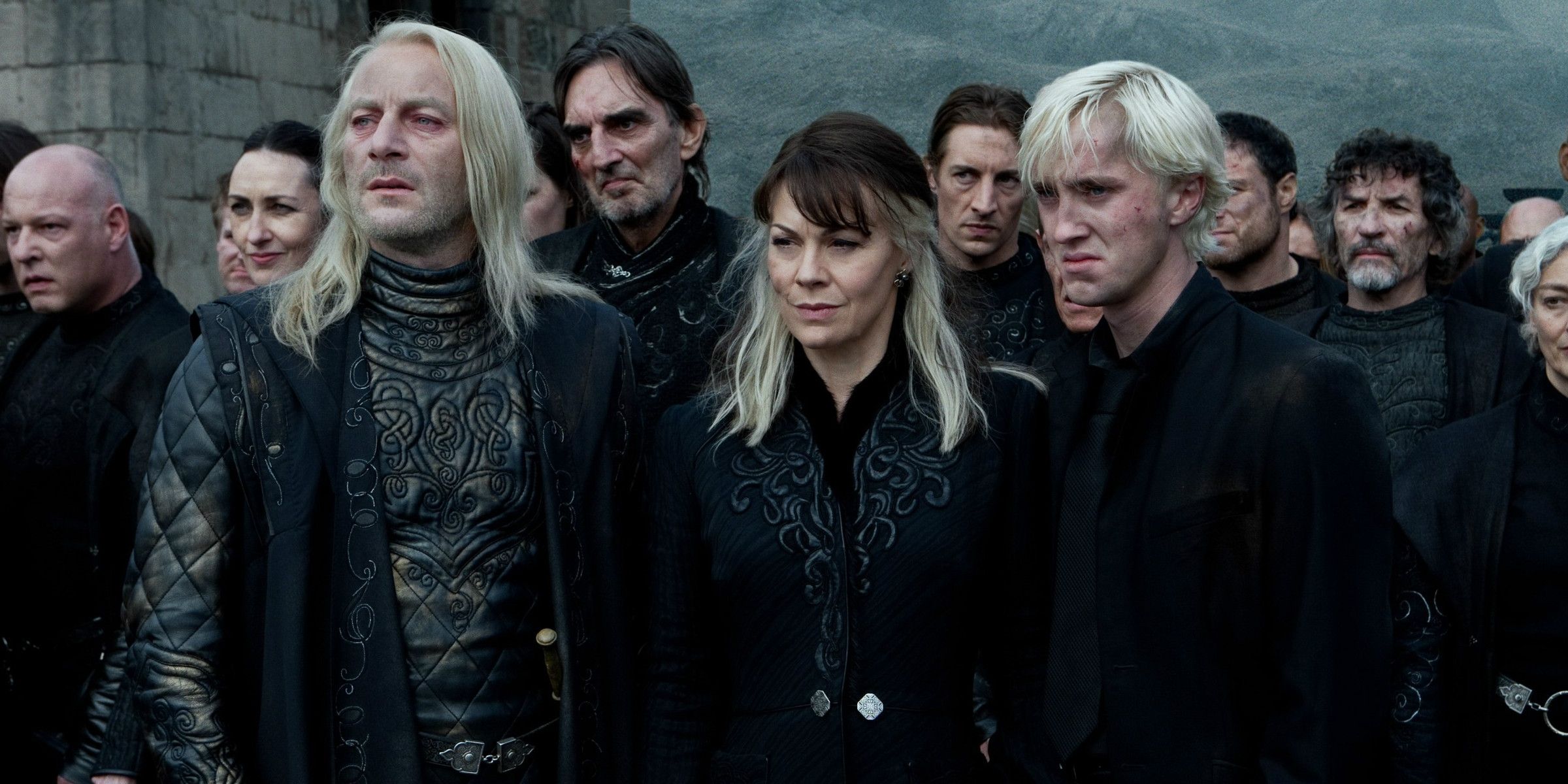 The Harry Potter franchise has produced some interesting families. Whether it’s the brave Potters, the loving Weasleys, or the messed-up Riddles, J.K. Rowling has created some of the most fascinating clans in recent fiction. We wanted to learn a little bit more about one of those families, so we turned to the Myers-Briggs® personality test to give us some insight. But instead of the many many heroic families in the HP universe, we decided our subjects should be a little bit more…well, divergent. So straighten those green ties and turn up your noses, Potterheads, here are the Malfoys by Myers-Briggs® personality type.

Not much is known about the shadowy patriarch of the Malfoy family. What we do know is that he had at least one son, Lucius (making him Draco’s grandfather), and that he took part in a plot to discredit a Minster of Magic. This head of the Ministry of Magic served some time in the sixties, and according to wizard history, was a half-blood. Abraxas, whose extreme prejudice against anyone without “pure blood” carried through the rest of his family, would simply not have a leader like that in office. So, he devised a scandal to hedge him out.

This probably puts Abraxas in the INTP category of Myers-Briggs®. When they’re villainous, INTPs are often masterminds of complex plots, working with a bunch of different people behind the scenes. INTPs can be extraordinarily detached from other people, and Abraxas’s prejudice means that he’s got this trait as well. Finally, INTPs can be extremely arrogant, a trait which Abraxas definitely passed on to heirs. Though we don’t know a ton about this character, it’s not crazy to assume he’s responsible for Lucius’s (and therefore Draco’s) lack of people skills.

For all the hate she has toward half-blood wizards, Narcissa shows a Titanic amount of love for her family. She is staunchly protective of her son Draco, forcing Severus Snape to make an Unbreakable Vow to guarantee his safety. When the tides turn for the Malfoy family in Voldemort’s ranks, it’s Narcissa that breaks from the Dark Lord to protect her family. She does this by lying to Voldemort about Harry Potter’s death — a move that not only helps Potter & Co. defeat Voldemort, but that also keeps the Malfoy family out of Azkaban post the Dark Lord’s defeat.

As an ISTP, Narcissa puts commitment above all other virtues. At the same time, her actions are pragmatic and over realistic, so her commitments are still subject to change. When Voldemort favors her family, she’s on his side. When he doesn’t, she betrays him for the benefit of her husband and son. Also like other ISTPs, Narcissa can handle a lot of pressure. Not many other characters could lie to Voldemort’s face like she did.

RELATED:  Harry Potter: 20 Things Everyone Gets Wrong About The Malfoys

We only meet Scorpius briefly in the Harry Potter books and films. He shows up during the epilogue of the last story, getting shoed off to Hogwarts by a now adult Draco Malfoy and his wife Astoria. However, Scorpius is one of the main protagonists in the Potterverse play, The Cursed Child. In it, he and Harry’s son Albus become fast friends, working together to stop a sinister plot of a Voldemort devotee. Scorpius is the first Malfoy we meet who is truly heroic.

In order to defeat evil in The Cursed Child, Scorpius frequently must think outside the box. That’s a common trait of INTJs: the ability to problem-solve by approaching things differently. Also in true INTJ fashion, Scorpius is committed to very few relationships. His family and small group of friends are all the people he needs. Finally, INTJs are fiercely individual, set in their personal convictions whether their loved ones are or not. That’s definitely the case for the first “good guy” Malfoy.

And where did Scorpius get his fierce individualism? Well, it’s probably not from his regimented father Draco. No, the youngest Malfoy is his own person likely because of his mother, Astoria Malfoy (née Greengrass). Though not an outright hero, Astoria taught her son many things that would guide him toward the side of light. One of these was an acceptance of all wizards, no matter their bloodline. Astoria died young (her family had been cursed to do so), but it was her compassion that influenced a lot of the bravest actions in The Cursed Child. Without her moral guidance, the good guys might not have won that one.

INFJs like Astoria have the tendency to quietly inspire others. They are usually compassionate and enjoy fostering growth in those they care about. Astoria is not a “charge into battle” hero like Harry Potter, but she does share his ability for hope. However, while Harry or Dumbledore might hope for a better, more tolerant world, Astoria reserves hers to the potential she sees in her son. Like another mother in the Potterverse, Astoria Malfoy is defined by her love for her child. And just like Lily Potter’s love for her son, that love helps save the world.

RELATED: Harry Potter: 20 Things Wrong With Draco Malfoy We All Choose To Ignore

Lucius is kind of the Malfoy prime. Everything we think about their family (their prejudice, family pride, or craftiness) comes to a head in the father of Draco. Lucius agrees with Lord Voldemort on almost every front. He likes the idea of blood purity and is alright with the use of violence to achieve it. However, he’s not the cult-minded fanatic that other Death Eaters prove themselves to be, like his sister-in-law Bellatrix Lestrange. Lucius is a kind of sniveling soldier: loyal but reluctant to make personal sacrifices to achieve a goal. After Voldemort’s first defeat by baby Harry, Lucius weasels his way out of incarceration by pretending to be under the Imperius Curse. Say what you want about Bellatrix Lestrange, but at least she’s got principles.

Now, not all ISFJs are as cowardly as Lucius Malfoy. However, they do share the trait of joining organizations that they believe hold their values. When they’re bad guys, this usually means they take on a “lackey” role to some other, superior villain. ISFJs serve their bosses through practical application of their skills and resources, like the resources of a wealthy wizarding family with ties to the Ministry of Magic. Finally, ISFJs are traditional servers, convicted by historical precedents, like family or social groups. Like the first and last entries on this list, Lucius is a firm believer of the “like father, like son” rule.

There are a lot of well-known bullies in fiction, but none of them are so well-liked as Draco Malfoy. Maybe it’s his sarcasm, perhaps it’s his pride, maybe it’s the fact that Tom Felton’s just cute, but for some reason, Potterheads have a special place in their hearts for Draco. This is pretty ironic, since Draco exhibits pretty much every negative quality an ISTJ can possess. Still, a good bad buy can make a story a lot more fun, even though they might be truly awful at points. I mean, we all cried when Loki died in Infinity War, right?

Even though Draco is a leader in Slytherin, he’s still bound by the orders others give him. That’s a defining trait for ISTJs, their sense of duty. Draco feels safe and powerful in a world that follows his idea of order, and any idea of tolerance makes him feel threatened. Like other ISTJs, he’s drawn to a role that will value his skill, specifically as a spy, and would-be assassin in Voldemort’s army. Finally, Draco’s ISTJ-ness shines in his love of tradition, especially when it comes to his family’s heritage. Maybe that’s what we find so interesting about Malfoy, the fact that he’s so entrenched in his family’s doings that he can’t see how wrong they are. I mean, it took him seven books to figure out that the murderous snake-people were the bad guys. That’s a priority set you have to wonder about.

What other Harry Potter families deserve the Myers-Briggs® treatment? Which Malfoy shares your personality type? Let us know in the comments section below!


Grant DeArmitt is a New York City-based writer and lover of all things weird. He enjoys comic books and detective novels, firmly believes in Dracula, and has a special place in his heart for animated comedies. You can follow him on Twitter @GrantDeArmitt.

Edward Herrmann’s Daughter Ryen Has 3 Kids Including Twins with Wife after Divorcing a...

Ruben Randall - September 17, 2022 0
Actress
Geoff Keighley's long-awaited Summer Game Fest kicked off on Thursday and with it came some exciting news on HBO's live-action adaptation of the critically...