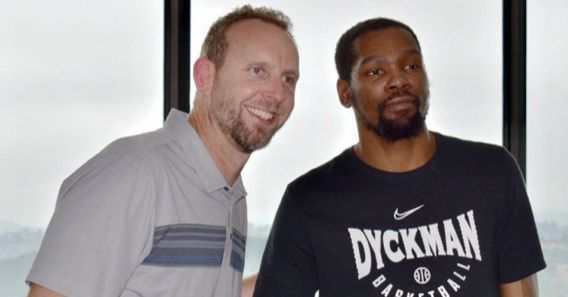 A few months back, in March, Logan Murdock of The Ringer, traveled to Brooklyn to research a profile of Kevin Durant, entitled “Let It Go,” a study of how KD had gone Zen, had learned to relax.

“Before, I used to worry about expectations,” KD told Murdock, “but now, I’m solidified and confident in what I bring.”

So, Murdock is someone worth listening to when he talks about Durant and in a sobering (for Nets fans) podcast with Ringer colleague Kevin O’Connor and an article for Bill Simmons’ website, he talked a lot about the Nets superstar’s current situation in Brooklyn and how KD does not trust the front office, presumably Sean Marks and Joe Tsai, “right now.”

Not much of Murdock’s take was optimistic if you’re a Nets fan. Indeed, he referred to the franchise’s current situation as “destruction” in the podcast and suggested perhaps more firmly than other pundits that Durant could indeed leave. “The vision is on the verge of crumbling,” he wrote.

“It didn’t have to be this way,” he said, summing up. “This team … and it’s ironic. Kevin came to reconcile relationships, build relationships with his BFF’s and it’s not working out. It’s doing the exact opposite. And you juxtapose that with Golden State winning…”

“Now, you have reports that Kyrie is looking elsewhere. I made some calls. Kevin Durant has not talked to the team in weeks. I don’t think Kevin is confident in the front office right now. I don’t know if he’s at the stage of leaving but there’s a big uneasiness from not only from the Kyrie side, but the KD side as well.”

And Murdock reiterated reports that Durant, who had in the past recruited free agents, is not doing that now.

At the center of it, Murdock pointed out multiple times is the Nets relationship with Irving.

“His biggest beef is that he feels that the front office didn’t grow to understand Kyrie, whatever that means. I would push back on that when a guy leaves for two weeks at a time … Kyrie earns the lion’s share of the blame. But I think KD believes that ‘hey, you guys didn’t understand this guy. You didn’t try to figure out where he was coming from.’”

Moreover, Murdock pointed to the Nets decision to dump Adam Harrington, their long-time assistant coach and director of development, as a big negative for KD. Durant and Harrington go back to KD’s time in Oklahoma City when Harrington was his shooting coach.

“And here’s another thing, KOC, the Nets got rid of Adam Harrington. who’s very close to Kevin. He’s one of Kevin’s guys. And that had a big ripple effect on how Kevin feels about this right now. He’s still in this figure-it-out mode but there is some fire to that smoke that he’s kind of reevaluating where he stands with this.”

Overall, The Ringer writer said he believes KD has the same attitude with Irving as the did with James Harden when the other member of “The Big Three” decided to ask out of the Nets. It’s the player’s choice. But he also believes Durant harbors some ill will toward the Nets organization.

“I think Kevin is using the same approach he used with … when James Harden left, Kevin was, ‘that’s what he did. I can’t fault him for that decision because I made a decision to leave in free agency. So I can’t fault somebody for doing something I would do.’ I think he has the same attitude towards Kyrie because from what I heard, they’re still pretty close.

However, Murdock also pushes back on the notion that it’s all on the front office. This is, after all, Kevin Durant’s team.

“I think in a lot of ways, he’s more on Kyrie’s side than he is on the front office’s in this one and I got to sometimes push back on this because like Kevin came to Brooklyn to play with Kyrie. His influence on this organization looms so large.”

“It’s hard to me to hear ‘aw man, the the organization this, this and that one.’ the organization could have done that. Pretty much the team the last two years to start the season were built in Kevin’s vision. So, it’s hard to wash your hands of it.”

Murdock also said he believes that James Harden was right to “bounce,” demand a trade. There too he said the issue was Irving’s unwillingness to get vaccinated.

“No matter what you think about Harden as a thing, if you look at what transpired before that and you looking at it through Harden’s eyes. he’s thinking ‘hey, I came here to win a title. We were going to do all these things.’ And a lot of that had to do with Kyrie being on the roster,” Murdock told O’Connor. “Now that he’s not playing and he’s not playing because of things he could control, ‘it’s too untenable for me, man. I don’t want to deal with this.’ So from that vantage point, he was right to bounce because the situation wasn’t what he thought it was going to be.”

Still, Durant believes the Nets didn’t support Irving particularly when they decided not to play him at all in October, after he refused to get vaccinated like all but a handful of NBA players, then brought him back in October.

“That’s just how he feels. ‘Hey man, I brought this guy in, him and Kyrie, and the front office didn’t do enough to support him at a time when we needed to support him.”

(The Nets, of course, repeatedly lobbied the city and state on the vaccine mandates that kept Irving out of Barclays Center.)

Murdock also intimates that the schism inside the organization is not new, that he saw the beginnings of the current malaise back when he visited HSS Training Center.

“When I was there in March, you could see the seeds of … It just wasn’t good, man. It didn’t seem like a functioning environment,” Murdock told O’Connor. “It didn’t seem like this was a plan. It seemed like a team whose plan all went to shit. And I think that’s the story of this franchise.”

While Murdock doesn’t believe that Durant is on the verge of leaving he thinks Irving will be gone. “I think he’s just going to wind up leaving, man,” adding “I think we are the list stage of where to go.”

And his take on the Nets? “I think the Nets have the chance to look a lot different Opening Night of next year.”

Ruben Randall - December 22, 2021 0
TV/Movies
After opening up all those Christmas presents, cleaning up the wrapping paper, and wrestling with the packaging of the impossible-to-open toys, you may not...