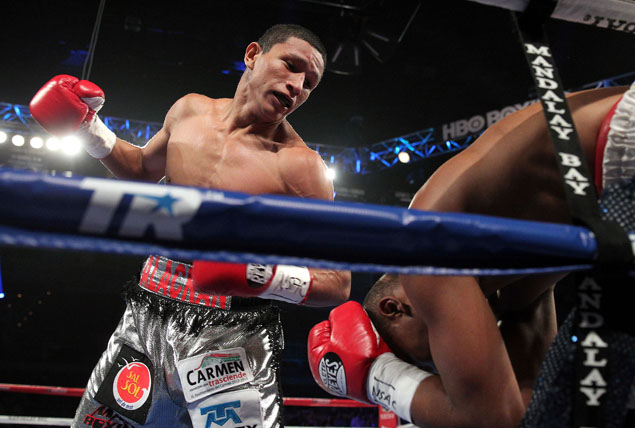 The last time we saw Miguel Berchelt, he yielded his WBC junior lightweight title to Oscar Valdez when he was knocked out in 10 rounds, in February 2021.

Since then, Valdez tested positive for the banned substance phentermine, which cast a shadow over his career-best win over his fellow Mexican. Berchelt isn’t pointing the finger at his former rival and says there were several reasons why he lost.

“I don’t want to demerit Valdez but it wasn’t me that night,” Berchelt (38-2, 34 knockouts) told The Ring through his promoter Mario Abraham. “Everything was wrong; my training camp wasn’t the best. I was listening the wrong people that affected my concentration and I wasn’t 100 percent back after COVID but I wanted to fight and I paid the price for it.”

The 30-year-old, who made seven – six of those successfully – defenses of the WBC 130-pound title over a four-year period, is ready to return, this time at lightweight.

“I took a long rest; now my mind is clear and I know what I want,” Berchelt said. “I want to concentrate on my comeback fight hopefully in March.”

The defeat prompted Berchelt to make changes in personnel to his team.

“I had great years with Alfredo Caballero,” he said of his former trainer. “I become a world champion with him but I felt that I needed a change – new air.

“Now I am training in Las Vegas with Jorge Capetillo. I am feeling very well and motivated; I just extended my contract with my promoters [Top Rank and Zanfer Boxing].”

Although Berchelt hasn’t been active, the big-punching former titlist has been intently watching the division he is about to invade.

“I think Teofimo [Lopez was] mistaken [in] his fight plan; he wanted to win with one punch,” said “El Alacran.” “Maybe he didn’t feel good anymore making 135 pounds. [The Ring Magazine lightweight champion George] Kambosos [Jr.] had a great night and was a fair winner.

“[Devin] Haney vs. [Joseph] Diaz fight: I think ‘JoJo’ had to be more aggressive that night to win the fight. [Vasiliy] Lomachenko had a great performance and [Richard] Commey did his best. Gervonta [Davis] was affected by the hand injury but [Isaac] ‘Pitbull’ [Cruz] didn’t disappoint. He didn’t win the fight but was it was a positive fight for him.”

“I want the big fights,” he said. “There are a lot of great fighters in the division, Loma, Gervonta, Haney, Kambosos, Ryan García. I would love to fight any of them.

Abraham, the president of MAX Boxing Promotions, co-promotes Berchelt with Zanfer Promotions and feels his fighter is almost ready to return to action.

“I haven’t seen him with that hunger and motivation for a long time,” said Abraham. “I hope he will have a great comeback fight to recover his confidence and then go for the big fights.”

See also  Who is Maya Erskine? | The US Sun

Questions and/or comments can be sent to Anson at [email protected] and you can follow him on Twitter @AnsonWainwright.

A look at R. Kelly’s negative net worth as he receives 30-year prison sentence