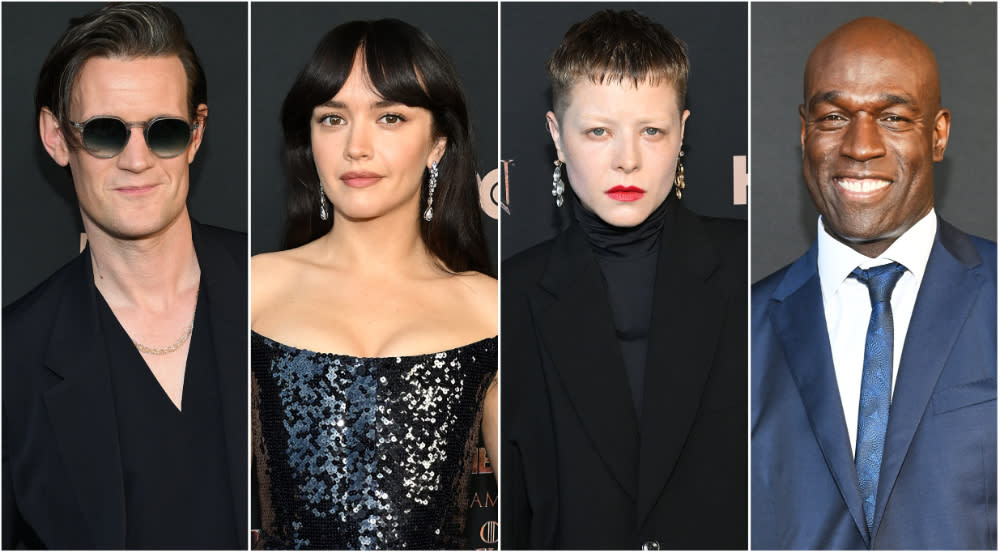 Days after soaring into San Diego Comic-Con’s Hall H to preview the “Game of Thrones” prequel, the “House of the Dragon” cast re-assembled for the series’ world premiere at the Academy Museum of Motion Pictures in Los Angeles on Wednesday night.

Set nearly 200 years before the events of the mega-hit HBO series, “House of the Dragon” focuses on the Targaryen dynasty in all their dysfunction — and with all their dragons.

With 17 winged creatures appearing in the first season alone, many of the actors spent a considerable amount of time pretending to fly. Matt Smith, who stars as Prince Daemon Targaryen, told Variety that riding the mechanical buck that mimicked a dragon was “good fun.”

“You’re on a remote control, and someone’s there moving it around, and then they fire a load of wind and rain at you,” he quipped. “Beats working for a living.”

But the sword fighting proved a little more dangerous. At Comic-Con, his co-star Fabien Frankel (Ser Criston Cole) admitted he accidentally “axed” Smith in the face during a rehearsal.

“I really regret saying this because I’ve been asked if I severely injured him,” Frankel said when reminded about the revelation. “But I did feel at the time, ‘God of all the people that I could have possibly axed in the face, Matt was the worst one.’ I was ready for them to go, ‘Matt Smith, is it? You’re out the show.’”

Smith had no hard feelings about the accident though, saying: “He chinned me, but it was alright. I lived to fight another day.”

There are a few less swords involved in Olivia Cooke’s portrayal of Alicent Hightower (save for one infamous catspaw dagger seen in the trailers), but her character’s storyline still cuts deep. The relationship between Alicent and Princess Rhaenyra Targaryen (Emma D’Arcy) is integral to the show’s plot, as the series chronicles their friendship as young women (with Alicent portrayed by Emily Carey and Rhaenyra by Milly Alcock) and the mayhem that breaks out when Rhaenyra’s claim to the Iron Thorne is challenged, leading to a civil war known to fans as the Dance of the Dragons.

See also  Olivia Cooke Starring in 'Breeders', Based on an Idea by Adam McKay

“It’s these two women who who are so much stronger together but the patriarchy has driven a wedge between them. And they are used as political pawns throughout their lives when really they are so much more,” Cook teased, explaining what intrigued her about the story arc. “They realize that as the series goes on, they have power and strength and determination, but the men around them are just so set on watching the world burn around them for legacy.”

Legacy is a big buzzword when it comes to “Game of Thrones,” and given that “House of the Dragon” has to follow the success of both George R. R. Martin’s book series and the pop culture juggernaut that was the Emmy-winning HBO show, there’s quite a bit of pressure.

“It was overwhelming. From the minute the show was announced, there was a lot of anticipation and a lot of people going, ‘I hope they do a good job,’” Toussaint explained. “So finally, to be able to actually be surrounded by a generally a supportive embrace — people just going, ‘I can’t wait to see it, I know it’s going to be great.’ It’s still quite nerve wracking, but … we’re proud of what we’ve done, and I think people are gonna like it.”

With nods to “Thrones” like banners bearing the House Targaryen sigil adorning the walkway to the after party, as well as a bronzed dragon skull at the entrance to the museum, HBO gave guests a tiny taste of the production design the cast and crew experienced on set.

However, missing from the group — which also included stars Paddy Considine, Eve Best, Rhys Ifans and Gavin Spokes, and co-showrunners Ryan Condal and Miguel Sapochnik –was “Game of Thrones” author Martin. Before the screening began, HBO and HBO Max’s chief content officer Casey Bloys told the audience that Martin, who also serves as co-creator and EP on “House of the Dragon,” was unable to attend the event after testing positive for COVID-19.

Back on the carpet, co-showrunner Condal reflected on being the “chosen one” whom Martin entrusted to adapt “Fire and Blood,” which has been his passion project.

“It’s a lot to process. I mean, it’s a huge responsibility,” Condal shared. “I deeply love George as as a man, as a writer, as a creator. I love his world. That’s why I ended up here. I came here as a fan; I was hired because I was a fan.”

But while he effectively “asked for this” assignment,” the creator admits, “I don’t think I knew what I was really getting myself into.”

Overall, though, being invested as a fan first had its advantages, as Condal endeavored to make the series he “would have wanted to see if I was just sitting on my couch tuning in” and he feels the team has succeeded in doing just that.

For his part, Sapochnik is one of the most successful alumni of the original “Game of Thrones” series, having earned two Primetime Emmys as an executive producer and director on the show, with the latter award won in 2016 for his epic “Battle of the Bastards” episode.

While Sapochnik will direct three of the new show’s episodes, fans shouldn’t expect any more battle scenes from the filmmaker. “I’m retired from doing battles, I’m afraid,” he confirmed, before sharing the advice he gave to the directors who helmed the more bombastic scenes. “Don’t go big for the sake of bigger,” he advised. “If you do a battle, make sure it’s got a story and make sure it’s for a character’s purpose. Otherwise there’s no point in doing a battle.”

See also  “I Am Devastated”: Son Patrick Mourns With Father Arnold Schwarzenegger as His 96-Year-Old Friend Passes Away

In short, Sapochnik’s advice to the other filmmakers joining the franchise: “Don’t fuck it up.”