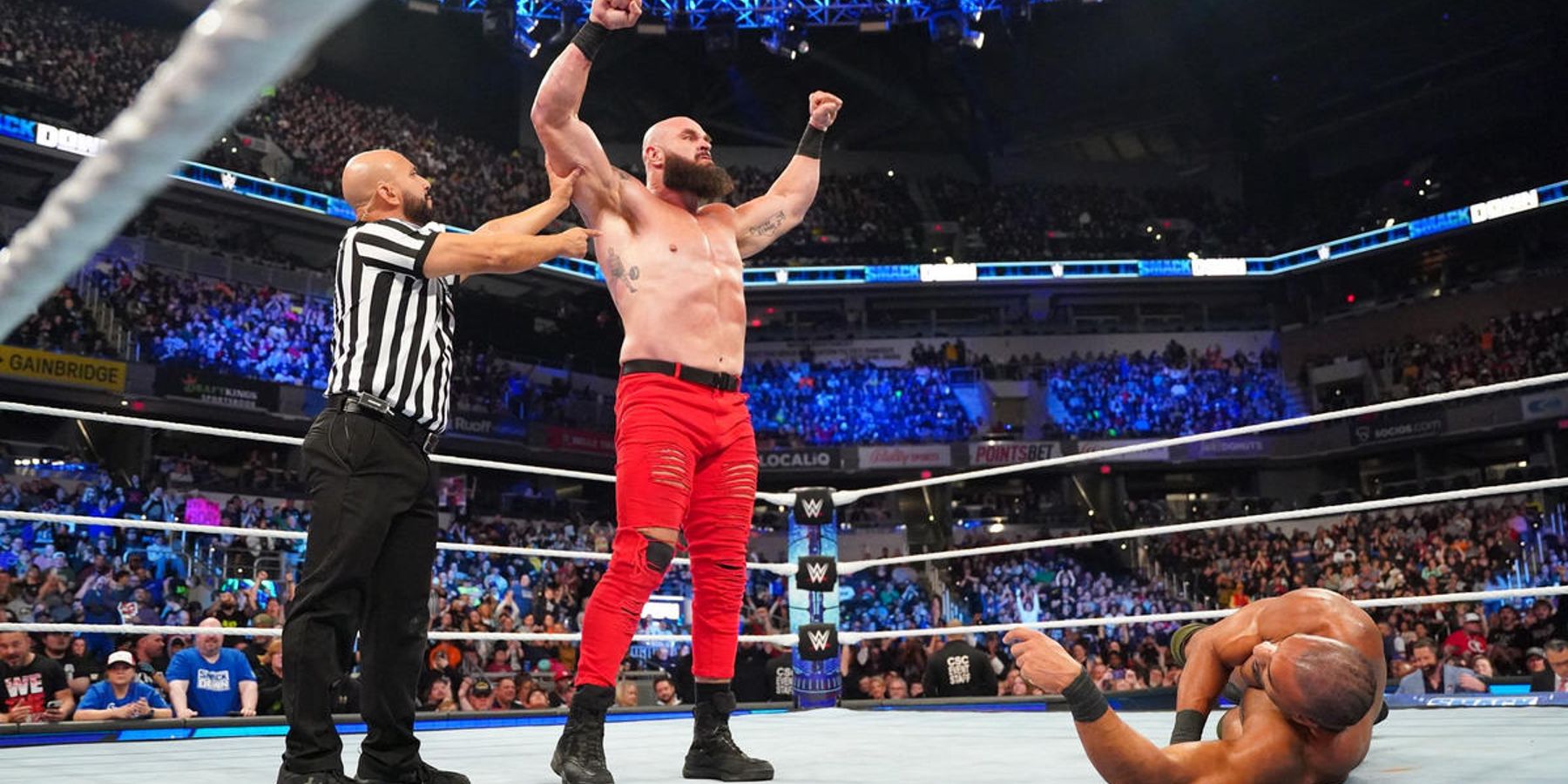 Braun Strowman isn’t a fan of “flippy” wrestling, and he once again made that stance clear on Twitter following WWE‘s recent Crown Jewel premium live event. Those comments have reportedly landed him in some hot water backstage, as he apparently has heat for his online antics. The 6-foot-8, 344-pound Monster Of All Monsters squared off against Omos, who is 7-foot-3 and weighs north of 400 pounds. It was a true clash of the titans, and the match was about as good as it could have been, considering the in-ring imitations of both men.

After Crown Jewel, Strowman took to Twitter to sarcastically give the match a 47-star rating while also writing that “no one cares about all these floppy floppers.” Several wrestlers responded to the 39-year-old on the platform, while others backstage are also displeased, according to Fightful Select. “The heat on Braun Strowman is very real,” according to their post on Patreon. “Those that we spoke with said that Strowman has actually been on his best behavior backstage since returning to WWE, and had been easy to deal with, but ‘social media Braun’ has been another story. WWE management is aware of it and at least one that we spoke to thought that it was an immature approach by Strowman.” Fightful also reported that the tweet wasn’t setting up some kind of angle, but the wrestler could have opened himself up for some on-screen ribbing in response to the comments.

Related: Theory Should Shift His Character After Failed Money In The Bank Cash In

Braun Strowman Is Catching Heat From All Sides

It didn’t take long for people to start piling onto Strowman following his Twitter tirade. Chris Jericho, Mustafa Ali and Ricochet all chimed in. Meanwhile, on AEW Wednesday Night Dynamite, Jeff Jarrett, who parted ways with WWE in August, also took a shot at Strowman. During a segment where he was talking about 7-foot-2 Satnam Singh, Jarrett said, “this isn’t no make-believe monster who wears red skinny jeans and is produced by the banana nose circus.” It was a not-so-subtle shot at Strowman, along with Triple H, who took over as WWE’s head of creative following Vince McMahon’s abrupt retirement this past summer.

Not surprisingly, Strowman hasn’t taken the pushback lying down. He stated that wrestling fans need to learn how to take jokes while also noting that he gets laid into constantly on Twitter, but everyone gets upset when he fires back, which is a fair observation, at least. Corey Graves also stuck up for Braun publicly, saying that WWE is all about self-promotion, and that’s all Strowman was doing.

For the time being, it doesn’t appear that Braun Strowman’s backstage heat has impacted what he’s doing on screen. He handily beat Jinder Mahal to advance in WWE’s World Cup on Friday Night SmackDown and could very well be in line to win that tournament. How appropriate would it be for him to lose to Ricochet after this hoopla, though? WWE fans will just have to tune in to find out what ends up happening with Strowman in the coming weeks and months.

Next: Mia Yim Is The OC’s Perfect Counter To Rhea Ripley Of The Judgment Day

Ruben Randall - May 3, 2022 0
Celebrity
Fox News star Lisa Marie Boothe was in talks to replace Meghan McCain as the conservative pundit on The View but refused to...