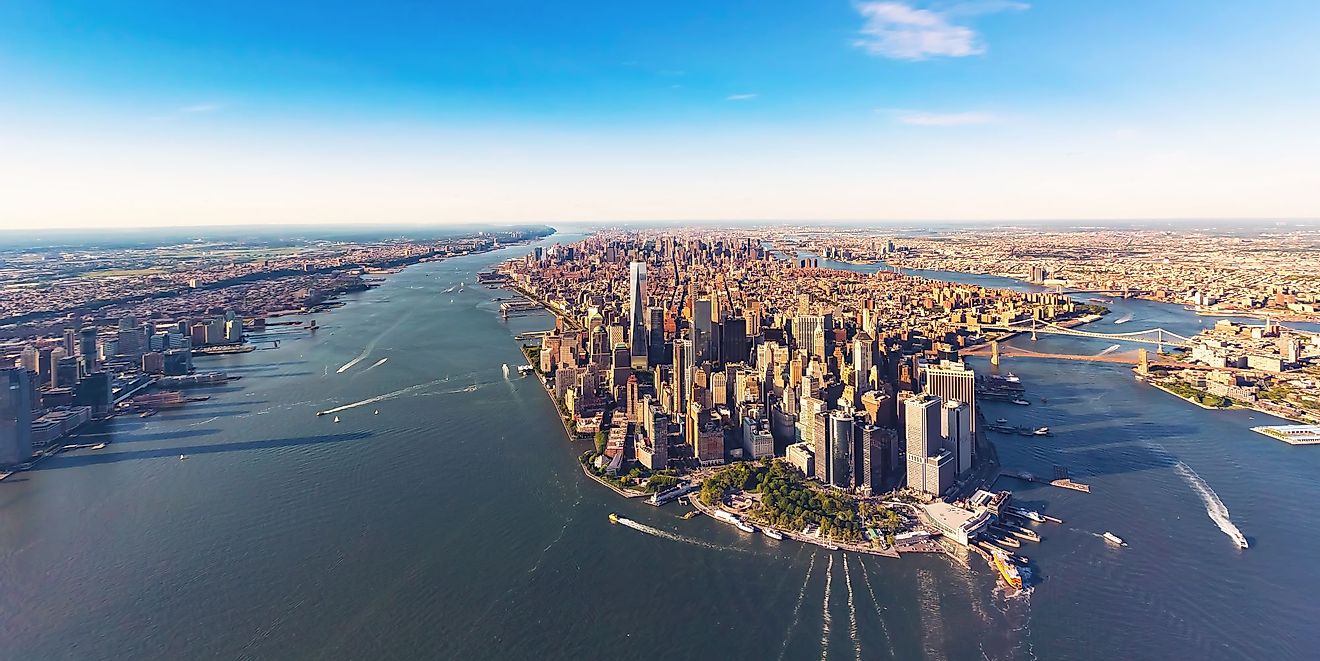 With so many unique neighborhoods to discover, the US State of New York is a fantastic place to visit. This couldn’t be truer than for Manhattan, one of the five boroughs that make up New York City.

Five boroughs make up the geographic area of New York City. Brooklyn and Queens are geographically a part of Long Island, but Staten Island and Manhattan are islands. On the other hand, Bronx is joined to the US mainland. Manhattan Island is about 13.4 miles long and 2.3 miles broad at its widest point. Except for the northern and southern extremities, the borough’s avenues and streets run roughly north and south, while streets run east and west. Manhattan is mostly a granite protrusion rising a few hundred feet above sea level. The southern edge and the island’s center are almost entirely made of granite, but Greenwich Village and Chelsea are made of softer soil. The highest buildings in Manhattan are positioned in these two huge “rocky” zones as a result of this geological structure. The Hudson River borders Manhattan on the west, and the Harlem River and the East River border it on the east. 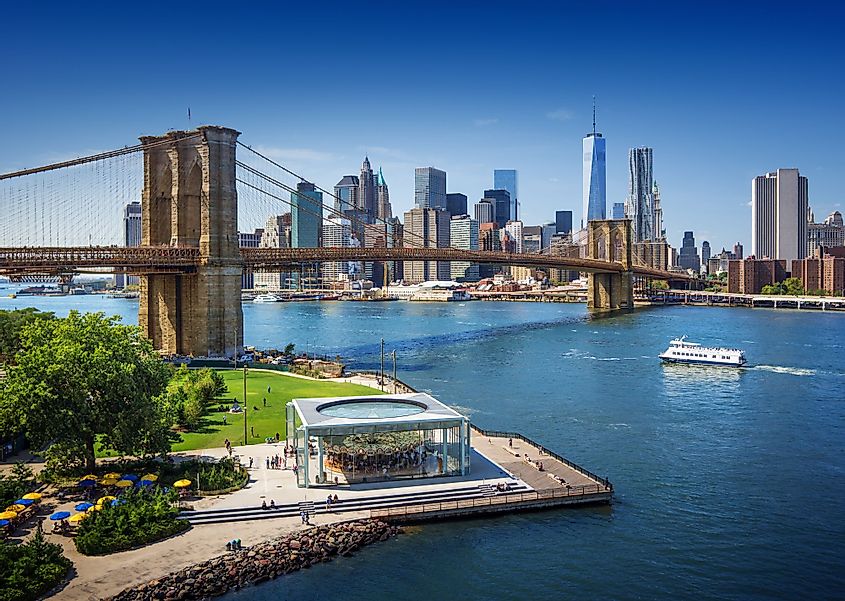 Brooklyn Bridge and the skyline of Manhattan

“Manhattan” has been derived from the Lenape Indians’ word Mannahatta, which means “land of many hills.” The first European to visit Manhattan was Englishman Henry Hudson, who sailed for the Dutch and reached Upper New York Bay in 1609. However, the island was certainly seen by two previous explorers in 1524. The Dutch originally occupied Manhattan in 1624, when a Dutch fur trade town was established on Governors Island. A year later, to safeguard newcomers, Fort Amsterdam and a citadel were erected on Manhattan Island, which was eventually renamed New Amsterdam. According to archives, Dutch colonists acquired Manhattan from American Indians for the modern-day value of $1,050. New Amsterdam was established as a city in 1653, and after the English seized the region in 1664, it was called New York. The city was renamed New Orange by the Dutch Republic in 1673, but it was officially given to the English just one year later in exchange for Run Island. The notion of “no taxation without representation” in New York City was affirmed in 1765, and the Sons of Liberty formed in Manhattan as a result. Manhattan was also the site of several key engagements during the early Revolutionary War. During the Civil War, dissatisfaction with Lincoln’s war policies rose in the city, especially because the city had a big and rising community of immigrants who couldn’t afford to pay $300 to escape conscription and believed free Blacks were taking their jobs. This hatred resulted in the three-day New York Draft Riots, which were one of the country’s worst occurrences of civil disturbance, killing about 119 people. Manhattan was founded as its own borough of New York City in 1898, with a white population of 98.7 percent at the time, which had declined to little more than 58 percent by 1990. The city flourished quickly and is today a popular destination for immigrants from all over the world. 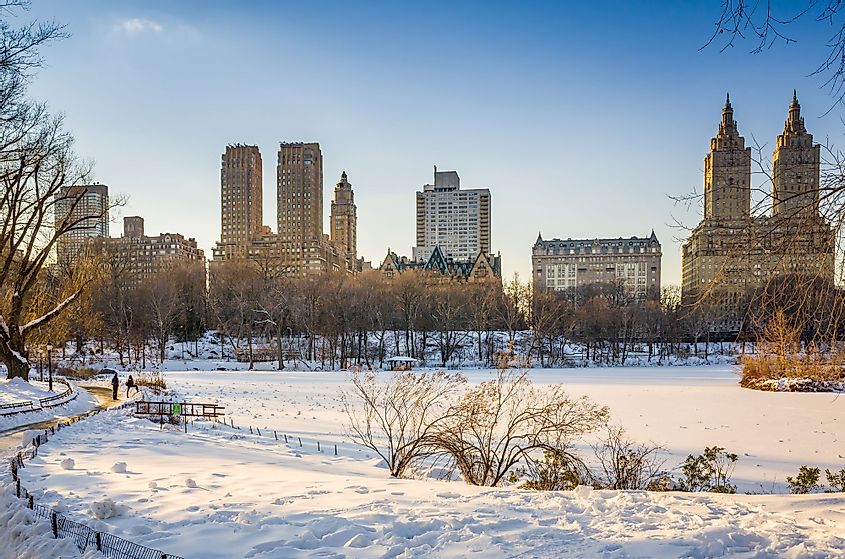 Central Park in New York City with snow in winter.

The humid subtropical climate zone, which New York City presently occupies, was originally known as a humid continental climate. A region must have average summer temperatures over 72 degrees Fahrenheit and winter temperatures above 27 degrees Fahrenheit to be classified as subtropical. Since 1927, the city has satisfied the former condition and the latter for the previous five years on average. Summers in Manhattan are warm and humid. Winters are very cold, snowy, and windy, and it is partly cloudy all year. The temperature normally ranges between 28°F to 85°F throughout the year, seldom falling below 14°F or rising over 92°F. The greatest times of year to visit Manhattan for warm-weather activities, according to the tourist score, are from mid-June to early July and from early August to late September.

Population And Economy Of Manhattan 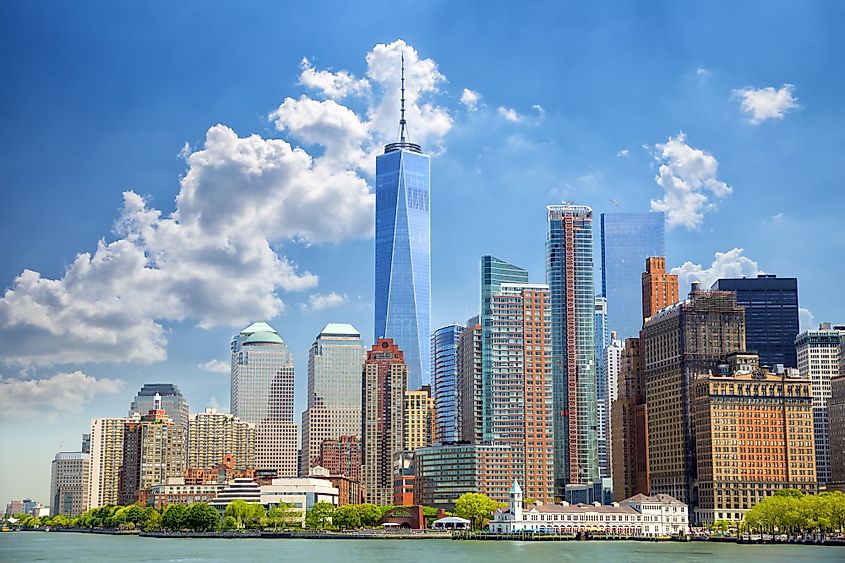 Manhattan is home to an estimated 1.63 million people who live in a 23-square-mile radius. This results in a population density of 70,826 individuals per square mile for the city. Manhattan is the most densely inhabited among New York City’s five boroughs, as well as the most densely populated county in the United States. It is more densely inhabited than any other city in the country and one of the most densely populated locations on the planet. Only 20% of Manhattan residents live in owner-occupied housing. After the Bronx, this is the lowest rate of any county in the United States. Manhattan has the greatest percentage of non-Hispanic whites of any New York City borough, at 48 percent, trailing only Staten Island. Foreign-born people make up around 27% of Manhattan’s population. Irish Americans make up about 8% of the population, while Italian Americans make up 7%, followed by German Americans (7%) and Russian Americans (6%).

The biggest office market in the nation and the biggest Central Business District in the world are both located on the island of superlatives known as Manhattan. In addition, the borough is home to some of the biggest banks in the United States and the largest stock market in the whole world. The job market in Manhattan has grown by 0.5 percent in the past year, and the projected rate of job growth over the next ten years is 31.5 percent. Manhattan’s average annual income is $63,610, compared to the US average of $28,555. 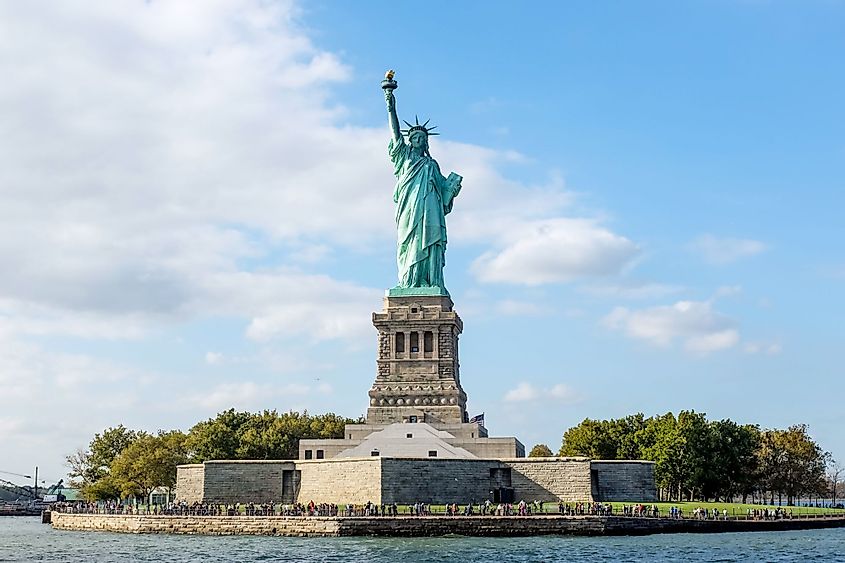 The Statue of Liberty.

The Statue of Liberty, which is the most recognizable landmark in America, is at the top of every first-time visitor’s list of things to do in Manhattan. The statue was gifted by France to the American people. One of America’s greatest tourist destinations, it was constructed in 1886 and continues to serve as a global symbol of freedom. The statue may be seen from land, with particularly nice views from Battery Park on Manhattan’s southern point. However, the best way to properly appreciate the Statue of Liberty is to take a short boat ride to Liberty Island and view it up close. 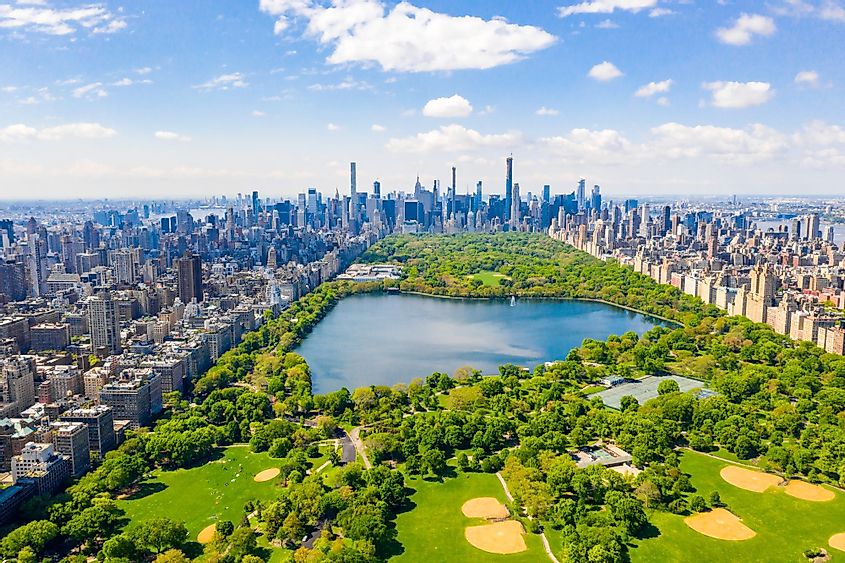 Aerial view of the Central park in New York with golf fields and tall skyscrapers surrounding the park.

Anyone visiting New York City should walk the winding trails of Central Park or ride a bicycle or a carriage. One of the things that make the Big Apple such a lovely and pleasant place is this enormous park in the middle of the city, which is a half-mile broad and 2.5 miles long. Aside from being a terrific area to enjoy some nature, Central Park includes several attractions, most of which are free, making it one of the few inexpensive things to do in NYC. The Belvedere Castle, Strawberry Fields, the Central Park Zoo, and the Lake are among the most popular destinations to visit. 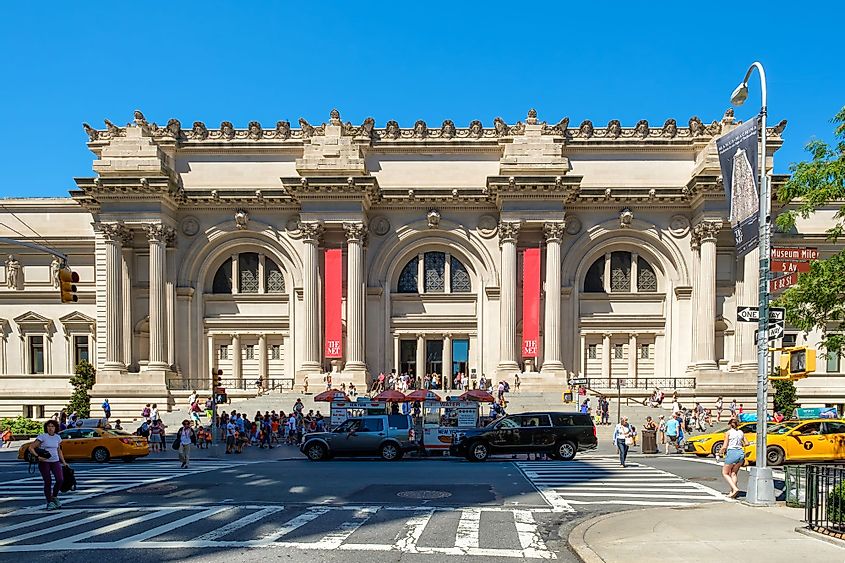 One of the country’s most well-known museums is the Metropolitan Museum of Art, or the Met, as it is more frequently known. The museum was established in 1870. There are more than two million works of art in the Met’s permanent collection, which spans a time period of 5,000 years. The Met Fifth Avenue is the highlight of the museum’s three locations. The collections include American ornamental arts, guns and armor, costumes, Egyptian art, musical instruments, pictures, and a lot more. 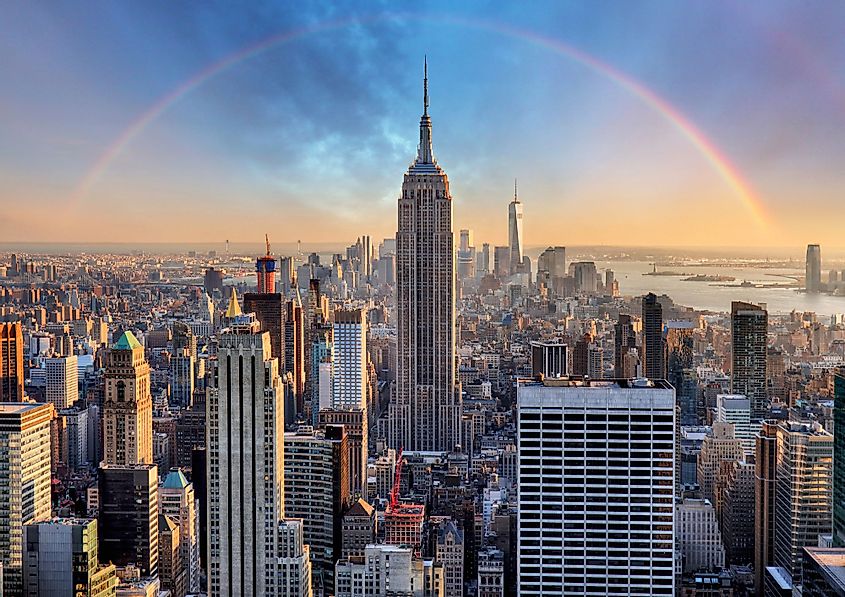 Manhattan downtown skyline with the Empire State Building, other skyscrapers and a rainbow.

It is a well-known landmark in New York and a popular tourist destination. When it was opened in 1931, the Empire State Building, which was topped with a mooring tower for airships, quickly became a landmark and a symbol for New York City. The Empire State Building has two observatories, and both have breathtaking views. Looking towards the neighboring states of New Jersey, Pennsylvania, Connecticut, and Massachusetts, visitors may see up to 80 miles far on clear days. The city’s tallest open-air viewing deck, the 86th Floor Observatory, is what most visitors anticipate seeing when they visit the Empire State Building. It is accessible through high-speed, automatic elevators and has a glass-enclosed space that gets heated during winters and cools during summers, as well as extensive outdoor promenades on all four sides of the property.

The American Museum Of Natural History 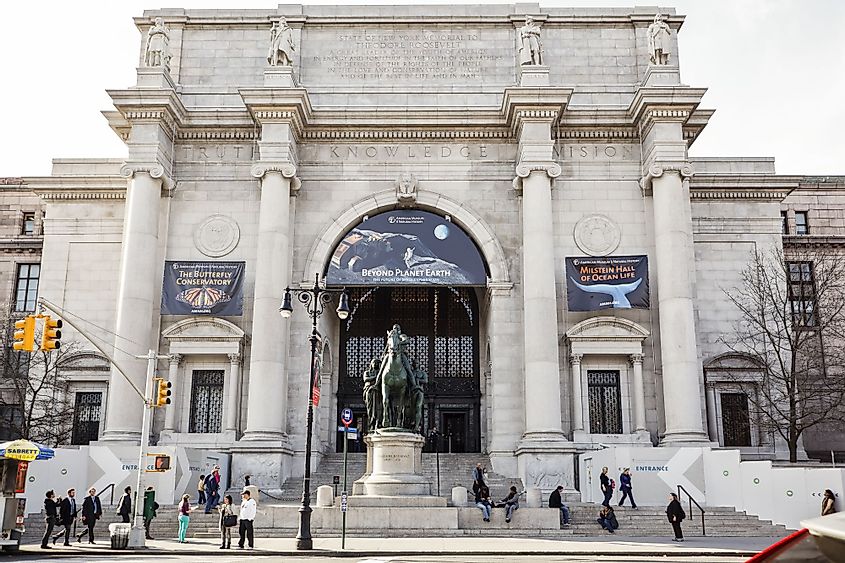 American Museum of Natural History is one of the city’s greatest museums for a family visit, providing something for everyone. Eight permanent display rooms present everything fascinating about our planet’s natural environment, from science and the environment to animals and fossils. The museum frequently offers temporary special exhibitions. Some of the present exhibitions worth visiting include one on sharks, which features replicas of these fascinating animals that you can really touch. 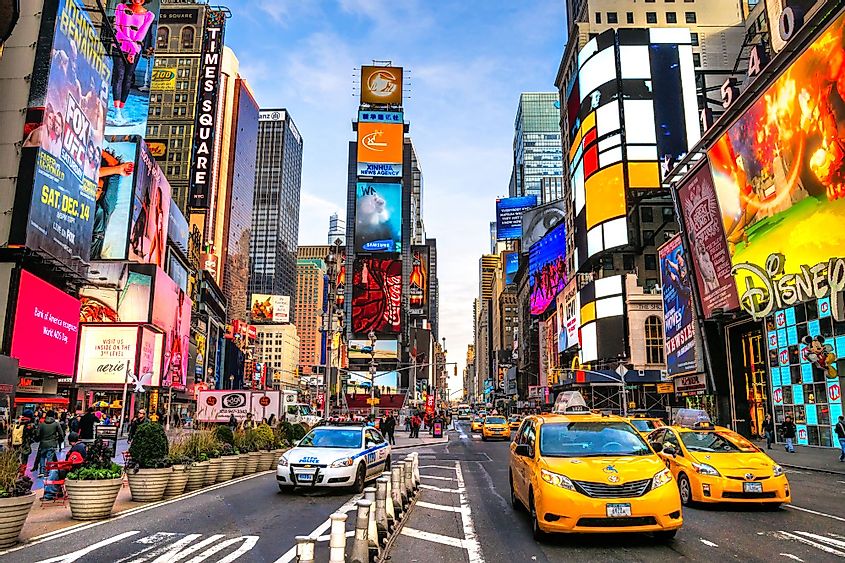 Lined with huge brilliantly lighted billboards and displays, Times Square is the place to be in New York in the evening, but it is as exhilarating at any time of day. The renowned “ball drop” at midnight takes place there as part of New Year’s Eve festivities in New York, and the square and nearby streets are crowded with people. Times Square is busy and often overcrowded, yet it has its own distinct attraction. The bleachers are a perfect place to take a rest and enjoy the scenery. Times Square, formerly Longacre Square, was named after the New York Times tower in 1904. In 1928, the newspaper showed current headlines along its moving sign, the first of its type in the world. 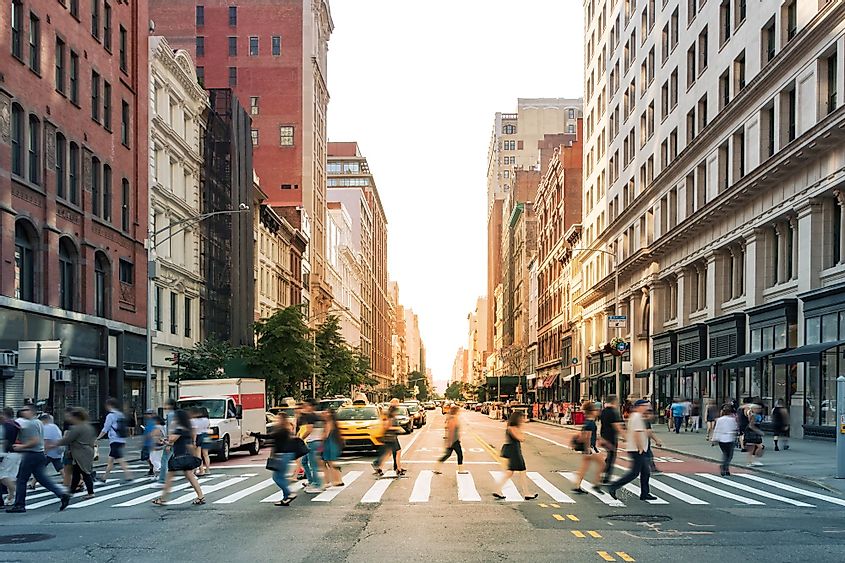 Crowds of people walking through a busy crosswalk at the intersection of 23rd Street and Fifth Avenue in Midtown Manhattan, New York City.

Fifth Avenue, one of America’s most renowned retail avenues, is New York’s prime shopping district, where many top designers have flagship stores. This upscale boulevard is lined with Cartier, Tiffany, Bergdorf-Goodman, the famed Apple Store Fifth Avenue, and, of course, Saks Fifth Avenue, among many others. Even those who do not shop can appreciate a stroll down Fifth Avenue. The ideal location is about from the south end of Central Park to the New York Public Library, or more precisely, between 60th and 40th Streets.

Many of the top attractions to see in the city are within walking distance or only a short ride away, making the city ideal for touring. Some of the attractions provide distinctive views of the city. There is always something to witness and do in Manhattan at every season of the year and at any time of day and night.