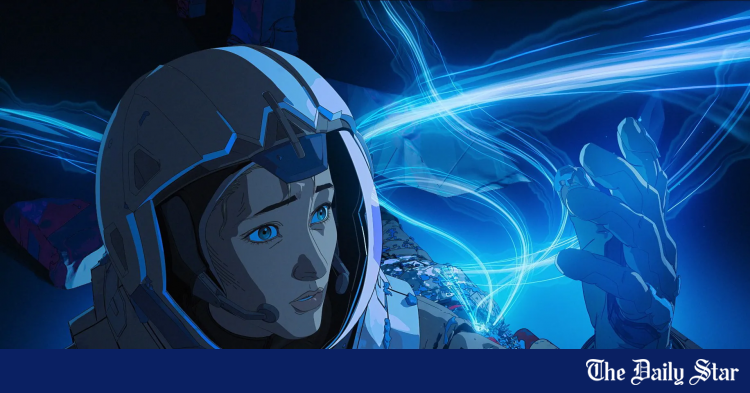 Listen, I get it. Netflix has lost its charm. First with Cuties, then Dave Chappelle’s The Closer. Then with the crackdown on password sharing, and finally with the stock market plummet. The most popular streaming platform hasn’t been successful in keeping its 221 million subscribers as happy as they were in its prime days.

It’s almost as though the glory this company revelled in during the pandemic was undone by these risky new ventures. However, every now and then Netflix redeems itself through a few gems like Black Mirror, Queen’s Gambit, and now, Love Death + Robots.

In a similar pattern, the third volume of this animation anthology series compensates for its rather disappointing predecessor: Volume 2. Consisting of a 9-episode potpourri of sci-fi, tech, and gore, Love Death + Robots takes sly advantage of decreasing attention spans of our generation. It has half the number of episodes than its debut season but that is by no means tantamount to a decrease in quality.

For a lot of people, the episode “Jibaro” is easily the cream of the crop. With the stunning use of hyper-realistic animation and a tantalising colour palette of earthy greens and metallics, this 16-minute long short tells a captivating folk tale of betrayal, desire, blood, and revenge.

The award-winning Spanish director Alberto Mielgo uses panic-inducing camera movements, artful dance motions and carefully crafted sound design to tell the story of  a bejewelled river siren who causes an army of conquistadors to go mad and drown at her screams, and a deaf knight who manages to survive and take advantage of the sequined enchantress. All this is done without any of the characters having to utter a single piece of dialogue. No frame is ever completely still, and the audio carefully cuts off at times, to present clues of the knight being deaf.

See also  Tiger Woods Officially A Billionaire, No Thanks To The Saudis

Viewers will find themselves at the edge of their seats throughout the entire piece, and may even struggle to figure out who they should root for. The more scrupulous of us may even pick up on some social commentary regarding climate change hidden in the plot, which I won’t spoil anymore for now.

David Fincher fans will also find beauty and excitement in the short “Bad Travelling”, which is basically Among Us meets Pirates Of The Caribbean. The story revolves around a crew on voyage with a sea-monster amongst them, and the efforts of the cold and calculating captain to save his life from the creature beneath the deck, as well from the untrustworthy crew on board. The animation consists of a gritty colour scheme, lots of light and shadow play,  as well as detailed viscera, so this episode may not be for those who have just had a hearty meal. If you can stomach it though, the risk and the psychological twists this episode offers is worth it by itself.

The next noteworthy episode of this series is without a doubt “The Very Pulse of the Machine”. Rendered in vivid colours and a retro style of 2D animation, this short is not very different from the cliche trope of astronaut stranded-on-a-dangerous-planet. However, it is still awfully relaxing to watch after the grittiness of the rest of the series. Bright hues of hallucinatory imagery and serene voiceover of William Wordsworth’s poetry allow the viewers to be immersed into its transcendental storyline.

The final verdict stands that you should definitely give Volume 3, in fact the whole series a chance, even if sci-fi, fantasy, or horror isn’t your thing. Commitment and long hours of screen time isn’t a demand that needs to be met to enjoy Love Death + Robots, so if this series isn’t on your bucket list already, it probably should be.

Koushin is your average leftist e-girl with crippling imposter syndrome. Send her video essays on indie films at: [email protected]