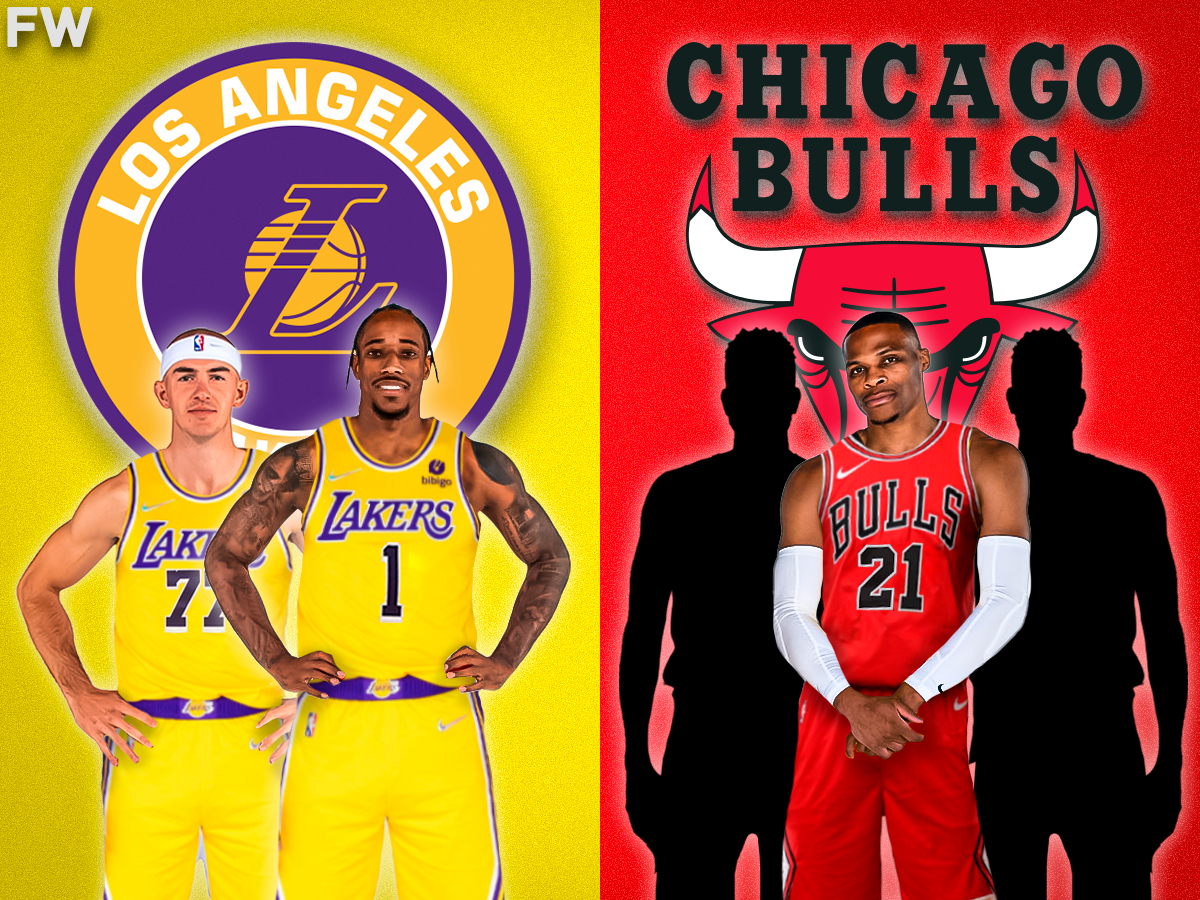 The Los Angeles Lakers are a team that has made a lot of moves this summer, most notably signing or trading for elite defensive players. We saw the team make a move for defensive guard Patrick Beverley and sign another solid defensive guard, Dennis Schroder. There’s no doubt that the team has been hard at work in terms of revamping its roster.

However, it is quite likely that the Los Angeles Lakers aren’t done making moves just yet. They still have players/assets that they could potentially trade, and in this article, we will cover a trade that would make the Lakers a powerhouse in the Western Conference.

Russell Westbrook was commonly viewed as a poor fit for the Los Angeles Lakers last season by fans and analysts alike. He is a ball-dominant point guard that is turnover-prone, inefficient, and a poor shooter. Though he is a great player, his style of play made him a poor fit next to LeBron James and Anthony Davis as a No. 3 option. There were times when Russell Westbrook played well on an individual level, but there were other times when the Los Angeles Lakers played poorly, and Westbrook’s limitations as a player were on display.

One way the Los Angeles Lakers could potentially improve their outlook for next season is by moving Russell Westbrook and getting solid veterans in return. Constructing the right type of competitive roster is particularly important when building around LeBron James and Anthony Davis. LeBron James is getting older and is in the latter stages of his career, and Anthony Davis’ availability due to his injury issues is not guaranteed.

Perhaps a trade with the Chicago Bulls could end up being the solution for the Los Angeles Lakers’ current woes. Here is a potential trade scenario that could intrigue both teams.

Getting an All-NBA level player like DeMar DeRozan and an elite defensive guard like Alex Caruso would definitely take both of those picks. It was noted that the Indiana Pacers weren’t willing to give up Myles Turner and Buddy Hield unless the Los Angeles Lakers gave up two first-round picks along with Russell Westbrook’s contract, and it is quite likely that the Chicago Bulls would make similar demands when making a trade with the Los Angeles Lakers. With that in mind, here is a potential trade framework between the two teams.

There is no question that this trade could have benefits for both teams. Here is our breakdown of why this move could end up helping both the Los Angeles Lakers and the Chicago Bulls.

The Los Angeles Lakers will always have a high ceiling due to the presence of Anthony Davis and LeBron James on the roster. During the 2019-20 season, we saw that duo lead the Lakers to the team’s 17th championship. The Lakers were easily the best team in the bubble due to their star power and experience. However, they have not had the same luck getting back to the NBA Finals, as the team faced a number of injuries and had poor roster construction over the last couple of years.

By trading for DeMar DeRozan and Alex Caruso, the Los Angeles Lakers would become instant contenders, and be able to withstand the regular season and get to the playoffs without any issues.

DeMar DeRozan was viewed as an MVP candidate at one point during the 2021-22 season, and there’s no doubt that he’s a talented player that thrives when scoring from the midrange area and at the rim. DeRozan is also a solid playmaker at the forward position. DeMar DeRozan had high production on the Chicago Bulls and was the team’s No. 1 option, but his unselfish nature and willingness to make the right play suggest that he would be a good fit next to LeBron James and Anthony Davis. In games where one of James and Davis are unavailable, DeMar DeRozan could take on a higher offensive load and potentially help the Los Angeles Lakers have a better chance of winning those games.

Alex Caruso is one of the league’s premier defensive guards. He is a player that can hound opposing ballhandlers relentlessly on that end of the floor, creating turnovers and transition opportunities for the Los Angeles Lakers. On top of that, he is a solid shooter and playmaker offensively. Alex Caruso notably has experience playing with LeBron James and Anthony Davis as well, being part of the 2020 Lakers championship-winning team.

Overall, DeMar DeRozan and Alex Caruso would increase the Chicago Bulls’ talent level while also making them a slightly deeper team. Though this trade affects some of the Lakers’ future, there is no doubt that sacrificing some draft picks to ensure that LeBron James and Anthony Davis get in another championship run or two is absolutely worth it.

Chicago Bulls Could Get A Future Superstar

On the surface level, this might seem like a strange trade to make for the Chicago Bulls. They were a solid playoff team last year, even if they did end up getting eliminated last season by the Milwaukee Bucks in the first-round.

With that being said, the Eastern Conference will definitely be tougher for the Chicago Bulls this year. We’ll get to see the “new-look” Brooklyn Nets, and the Philadelphia 76ers have also made some key depth additions, such as P. J. Tucker. The Milwaukee Bucks and the Boston Celtics aren’t going anywhere as long as Giannis Antetokounmpo and Jayson Tatum are healthy and playing like superstars. It is tough to see the Chicago Bulls being outright better than any of these four teams. Teams such as the Atlanta Hawks and the Cleveland Cavaliers have also made win-now moves this past summer as well.

On top of the increased competition in the Eastern Conference, there is also other risks for the Chicago Bulls in terms of their roster going into this season. The first risk is DeMar DeRozan’s production potentially getting lower as he ages. DeRozan will be 34 this upcoming season, and it is quite possible that he’ll be less efficient and score less this year. The second risk is the potential of Lonzo Ball missing extended time with his knee injury. Coach Billy Donovan notably stated that he is preparing for the possibility that Lonzo Ball won’t be there for the entirety of the Chicago Bulls’ season.

When taking those things into consideration, perhaps it would be best for the Chicago Bulls to bottom out and try to get into the lottery this season. In this scenario, the Chicago Bulls would also end up trading Alex Caruso to get draft compensation. Though he is obviously a good basketball player, Caruso isn’t good enough to lift a team to the playoffs by himself. The team could also end up trading Nikola Vucevic for further draft compensation to help with ushering in the next era of the franchise.

Being a tanking team this year could end up being particularly beneficial if the Chicago Bulls end up getting the No. 1 overall pick and drafting Victor Wembanyama. There is no doubt that Wembanyama has taken the league by storm after his two games against the G-League Ignite, and he showed off his elite potential on both ends of the floor. The Chicago Bulls tanking would thus be worth it this season, as they would have a chance at drafting a generational prospect.

Adding Victor Wembanyama to a squad that features Zach LaVine, Ayo Dosunmu, and Patrick Williams could make the Chicago Bulls a powerhouse of the future. Victor Wembanyama would be joining a team with solid pieces around him as well, rather than having to turn around a franchise by himself.

This trade would obviously happen if the Chicago Bulls don’t believe that their roster can be competitive going into next season. In that case, the optimal move for the team would be throwing their hat into the Victor Wembanyama sweepstakes.

This Is A Win-Win Trade For The Lakers And Bulls

This trade is a move that could benefit the Los Angeles Lakers and the Chicago Bulls equally in terms of fulfilling their goals. Obviously, each team would have its own reasoning in terms of why they do this trade.

For the Los Angeles Lakers, this trade is about moving a player that was a poor fit with the team while also increasing their talent level and getting better defensively. This move would also let Russell Westbrook to get a fresh start elsewhere. Though he might not end up playing a game for the Chicago Bulls due to them likely wanting to lose as many games as possible, the team could also end up buying him out to allow Russell Westbrook to seek a new destination. If a buyout doesn’t happen, then Russell Westbrook will be a free agent in 2023 anyways.

The Chicago Bulls, on the other hand, would be moving two of their good veteran players in order to become a tanking team. This would result in them getting a top-pick, and potentially getting a solid chance of drafting Victor Wembanyama. The opportunity to get a legendary prospect is obviously tantalizing for the Chicago Bulls, and being a tanking team will also give some of the Bulls’ prospects a chance to develop without competitive pressure.

Overall, this trade scenario is one of those that could end up being a true win-win proposition for both teams involved. It remains to be seen if the Los Angeles Lakers and the Chicago Bulls end up making this deal, but this is certainly an appealing scenario for both parties.

2023 NBA Draft: 5 Most Realistic Teams That Could Select Victor Wembanyama As The No. 1 Pick

The 10 Biggest Questions For The Los Angeles Lakers This Season

Ruben Randall - December 1, 2022 0
Money
Hailey Orona Net Worth How much does Hailey Orona worth? As of 2022, the American TikToker, Hailey Orona has an estimated net worth of $1.7...