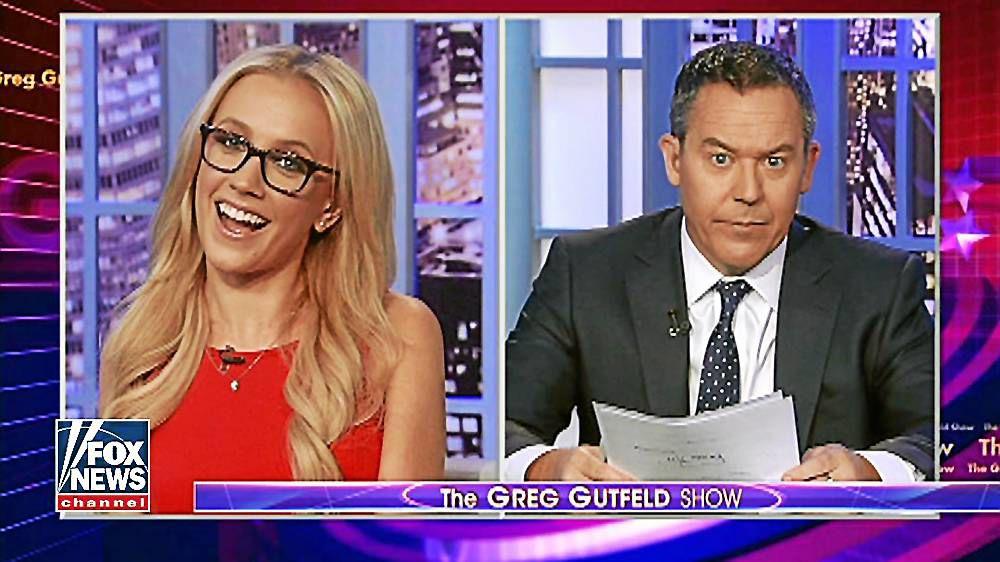 With late night talk hosts turning more to politics, it seems only fair that a news pundit takes on late night comedy.

Two other positions on the sectional are filled with a variety of guests: writers, comedians, actors, military veterans, advisers and, of course, politicians.

Taping for his show starts shortly after Gutfeld finishes his Friday ‘The Five’ co-hosting duties.

The self-described libertarian conservative heads down the Fox News hall for filming his Saturday night contribution to political comedy discourse. Although Fox News’ 1221 Avenue of the Americas location is only a block from where ‘SNL’ is broadcast, the perspective is worlds apart. And unlike the large staff producing the NBC show, Gutfeld’s team of fewer than a dozen writers rehearses and tapes a lively hourlong broadcast each week, all year long.

While most shows have been taped since its debut on May 31, 2015, live broadcasts also occur; such as on April 26, 2018, when President Trump visited Washington, Mich., at the while the White House Correspondents’ Dinner was going on in D.C. Gutfeld and team wanted to react in real time, and broadcast live shortly after the President finished his remarks.

Banter between guests fills the hour, pre-taped comedic bits are common. In response to the New York Times recent celebration of Karl Marx’s 200th birthday, the show offered a birthday video that highlighted the ‘successes’ of communism.

Part of the charm of ‘The Greg Gutfeld Show’ is the cast. Although former beauty queen and writer Joanne Nosuchinsky departed in 2016, Timpf remained.

Also known as ‘Kat,’ the petite Michigan native – who lived in both Macomb and Oakland counties and still has family here – headed to New York City after graduating from Hillsdale College. As a budding journalist, she made a video for conservative news website Campus Reform, which garnered national attention, and caught Gutfeld’s eye.

‘Greg saw me and thought I would be great for Red Eye and soon I was on every two weeks,’ she said. ‘So when Greg got his own show, they brought me on for the pilot, and I guess they liked what I did because here I am.’

A libertarian, Timpf has been known to disagree with Gutfeld. But staying true to her principles is important. A writer for a conservative magazine who also does stand-up comedy, she is not easily intimidated.

‘A long time ago, I promised myself that I would never say anything that I did not believe because I thought it was what people wanted to hear,’ she says.

‘I always give my completely honest opinion on any issue that I am asked to speak or write about, because that way if I get hate for it, at least I know that I was being true to myself. Because you are going to get hate over it regardless. At least I am getting hate about stuff I truly believe in.’