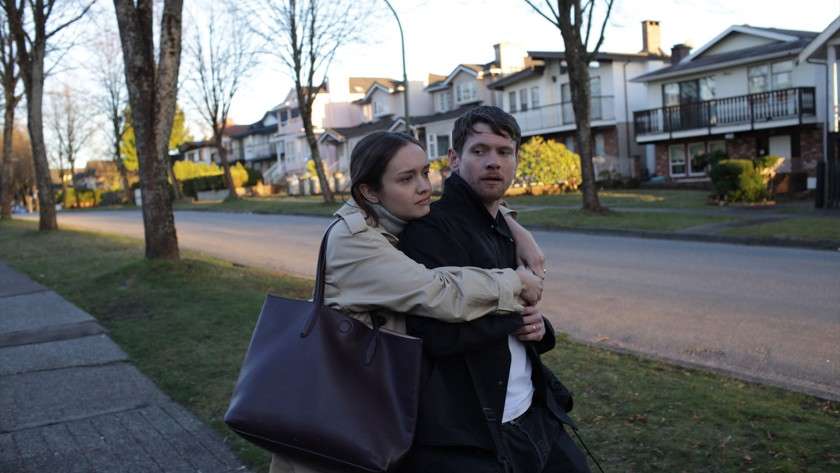 In the upcoming film Little Fish, based on a short story by novelist Aja Gabel, there is a worldwide pandemic — not of COVID-19, but of NIA, or Neuroinflammatory Affliction. The chief symptom of this affliction is the obliteration of memory: sometimes as a slow fade, sometimes all at once, like rapid-onset Alzheimer’s. NIA is possibly caused by the absence of an enzyme necessary for memory retention, but who knows — scientists researching the matter may have forgotten. Is it airborne or spread via surfaces? Hard to say. All airplane flights are grounded, but why? To prevent transmission, or to prevent crashes when pilots forget mid-air how to fly? (This happens with vehicles down on the ground, too.)

Trying to navigate this dire new world is a young couple, Emma Ryerson (Olivia Cooke) and Jude Williams (Jack O’Connell), who have to come to terms with what the erasure of their shared memories means.

“We made this film nine months before COVID-19,” Cooke tells SYFY WIRE about the film. “But what I think sets it apart from the pandemic that we’re now in is that the pandemic has different symptoms, and it’s more of a backdrop. Our movie is really about these two characters and their relationship.”

In the interview below, Cooke and O’Connell chat with SYFY WIRE about their input on the script, lucky fires, and their shared Game of Thrones connection.

How weird has it been to see things from your film reflected in real life, when that wasn’t the intention at all?

There are riot scenes in the film where people try to get access to the cure. You’d think that would be the case in real life, but instead we’ve had riots and protests where people try to prevent that access, pharmacists who have destroyed the vaccine…

Cooke: It’s just lunacy, isn’t it? It’s selfish, at the very least, and completely dangerous at the most. It just angers me, because without vaccines, without science, we’d still have massive cases of tuberculosis, measles, mumps, and polio. I think people are just so privileged and lucky to live in a world where they have not had to deal with those things. And we have got something where science is trying to prevail, to bloody save us all, and there is a huge chunk of humanity trying to intercept that. [Sighs.] The mind boggles.

The week before shooting, you two got to have some input on the script. What changes did you suggest?

Cooke: Some of the … changes we made were … relationship-based, to what felt more natural and realistic for us as actors. We probably got rid of some cheesy moments that, as Brits, we didn’t feel we could do with the sincerity that the writer was asking of us. We maybe took the piss a bit more, in lieu of other modes of affection. But that might be me making it up because I can’t remember!

O’Connell: It was good that we had the time to focus on that. And there were other areas where we got to raise the stakes a little bit as well. In the script, Jude had a past drinking issue, and I just thought, “He’s a musician. He’s been on the road. Why don’t we try and delve a little further into that, and actually make it a thing?” Because I didn’t want the film to just gloss over what is quite a pertinent issue. And so this becomes the reason that Jude can’t proceed with an experimental cure.

What was the biggest surprise on set?

Cooke: There was a massive fire across the street from where we were shooting, at a textile factory or something. No one died, no one was injured, but it gave us a dramatic pandemonium backdrop that we could use. Being selfish artists, we were like, “Let’s use it!” They’ve caught on fire, and we’re thinking of B-roll. It suggested the hysteria in the wider world, the fire engines and whatnot. There were no ambulances. And after that, it gave us a break from shooting scenes where we were just languishing in our love for one another. We could get a cup of tea and watch the hunky firemen. It was fun.

Olivia, you recently binged Game of Thrones for the first time, and apparently now you’re obsessed. How deep did you get into that world, to prepare for a lead in the prequel spinoff, The House of the Dragon? Did any of it confuse you on the first watch?

Cooke: No, I was able to follow it all. I had someone with me who had seen it previously to help. But I did have questions, like, “Where are we now?” “Do we know this family?” “Have we seen this sigil before?” “What’s on that banner?” I had more logistical and geographical questions, rather than plot.

You had a blackout moment when you met Tom Cruise on the set of Ready Player One. Is there anyone from Game of Thrones who might provoke that kind of fangirl reaction now?

Cooke: Maybe Bronn of Blackwater? I’ve met Peter Dinklage before at a party, and we had a very nice chat, but I hadn’t really seen Game of Thrones then. So now, I would like to say how he was my favorite character and how great he is. I don’t think I’d blackout, though. I think I’d be cool. [Laughs]

Well, if you had cited Gendry, I would have suggested that you get Jack to introduce the two of you. He and Joe Dempsie remain good friends…

Cooke: Ah, from the Skins days!

O’Connell: Lovely bloke, even if we support opposite football teams. I would have been more than happy to acquaint them, but I think they’re acquainted already. What are you trying to make me do here?

Cooke: I don’t think I have met him before. I always see him in a particular area of London. I’ve passed by him four times now on the street. We’re bound to meet! It’s such a small world here.

Before you go, if you had to choose one memory to lose…

Cooke: I think maybe the fake ID at 17 in Manchester. All of those memories, I’d like to omit.

O’Connell: Can I cop out?