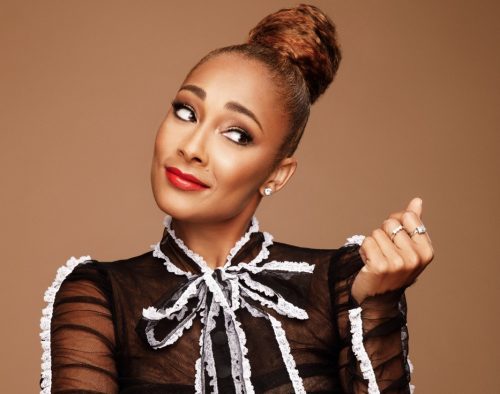 If you want to categorize Amanda Seales only as a comedian, then you just don’t understand. A writer, producer, actress, educator, music list curator and game show host count as descriptors that must be included among the many hats which she wears.

The bundle of talent recently came visited the Kennedy Center to conduct a university-level symposium under the guise of a stand-up comedy set. At least that’s what the uninitiated thought with this writer included in the group.

But her opening remarks illustrated that we would experience a rare and unforgettable treat.

“Black culture is a real thing. It is a shared experience,” Seales said, receiving affirming shouts and applause. “This show is welcomed to all but is for a Black audience.”

Seales, who portrayed the character Tiffany DuBois in HBO’s “Insecure,” brought her “Black Outside Again” tour to the District, which counts as part of her “Smart Funny & Black” trademark and she clearly knows how to get an audience involved.

Before taking to the stage, Seales’ back-up trio, “The Clapbacks,” performed a series of grooves like Mint Condition’s “You’re Breaking My Heart.” Then she appeared following a few opening comments and led her fans in “Lift Every Voice and Sing,” the Black National Anthem.

The playlist throughout the evening satisfied a broad range of tracks for a relatively diverse age of audience members. Seales gave us direct and subtle commentaries on a variety of current events within the context of where we have been and where we need to go. Seales’ tutorial stage show included tributes to trailblazers who have paved the way for today’s Black community.

Using a two-competitor game show format, Seales featured author, comedian and culture critic Baratunde Thurston in a challenge of wits against podcaster, social commentator, entrepreneur and Baltimorean Kalilah Wright. The two served as “BLACKSPERTS” – experts in Black culture. As the two contestants went through several topics testing their knowledge, it was really a creative exchange of brilliance and improvisation. A musical selection from The Clapbacks came between each category but also added commentary to the topics. At the end of the section where noted voices advised Justice Clarence Thomas, a “Da Butt” by D.C.’s own E.U. was performed, it stood as a Seales-acknowledged tribute to Go-Go music.

“Black Outside Again” followed a format Seales has used since 2016. The game show set up as a platform for a Black history and civics class included an aerobics session, a choir session and a night at “the club.” The aerobics and choir reference refer to the evening’s playlist we all needed. The audience started singing along with every song. An exercise session erupted because the audience could not resist moving to the music. When Juvenile’s “Back That Thang Up” was played, almost instinctively, many of those in the Kennedy Center’s Concert Hall jumped up and started twerking – yet another indication that Seales knows her audience.

The “Black Outside Again” tour is in its first month. If you have considered furthering your education, this tour is a prerequisite. Learn more from Seales at https://www.amandaseales.com.

Ruben Randall - November 3, 2021 0
Celebrity
As so many others around the NHL spoke with fear and uncertainty, seeming near ambivalence,...

How House Of The Dragon’s Olivia Cooke Really Feels About Her...