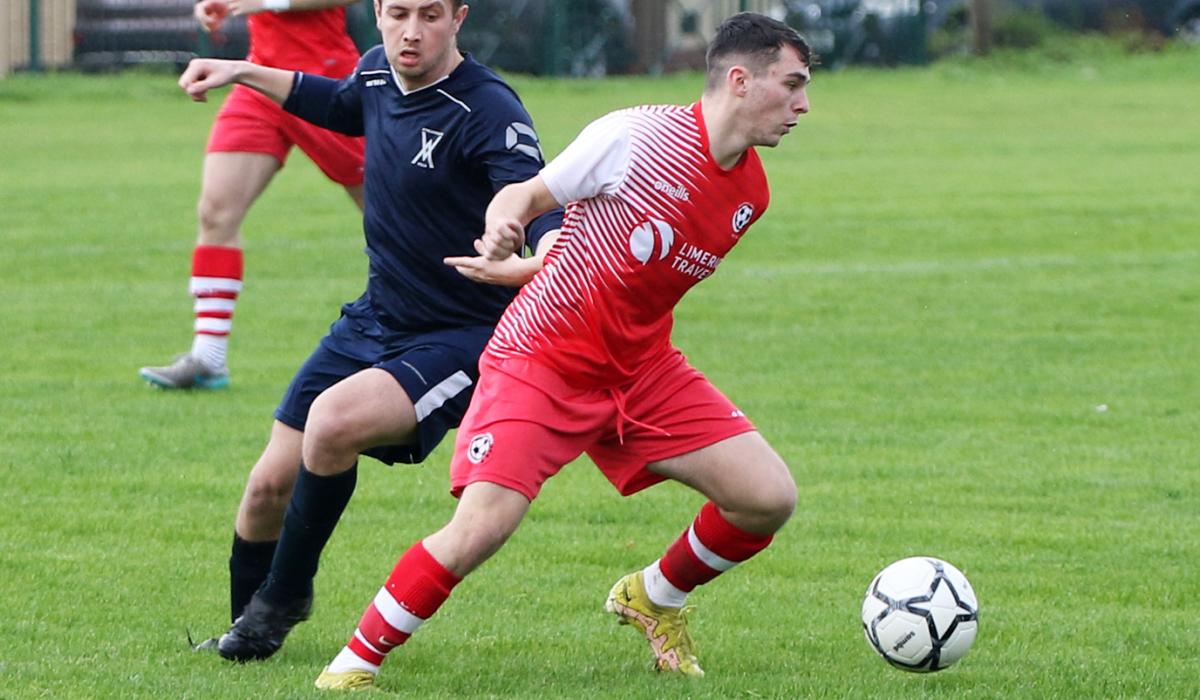 FAI Junior Cup kingpins Fairview Rangers made the journey to Cork to play Charleville in an all-Premier clash and were put to the pin of their collar before escaping with a 3-2 win by the odd goal in five.

Despite their lowly league position showed a steeliness that augers well for the remainder of their season. They raced out of the traps and had the perfect start with a Donal O’Connell shot finding the top corner despite Aaron Savage’s efforts.

Fairview began to settle thereafter, and with their big-name players to the fore, began to take over the game, and it came as no surprise when Shane Duggan turned in an equaliser.

Undeterred, the Cork side continued to play a nice brand of short passing, with Cian McNamara to the fore, they continued driving at the Fairview defence on numerous occasions, but the final pass was lacking, as it often was for the visitors, and we reached the break level.

As often happens in football, the perceived underdogs rue their missed chances, and, indeed, this was the case on Saturday evening. With Fairview dominant for the next quarter, they took control of the game. Firstly, Paudie Walsh stood up a cross and despite a lack of pace on the ball, Conor Ellis generated enough power to notch his 20th goal of the season. Twenty became twenty-one soon after when hesitancy in the home defence allowed the prolific striker to capitalise and finish to an empty net.
To their credit, the home side never gave up and set up a grandstand finish when McNamara evaded a number of challenges to fire home.

Despite a few late set pieces that caused some nervy moments, the away side, brilliantly marshalled by Jason Cross, held firm to see Fairview into the “out of town” stages.

Last season’s FAI Junior Cup runners up, Pike Rovers gave a glimpse of their determination to go one netter this time out when they overwhelmed Premier A League leaders Newport by five goals to one.

In a whirlwind start to proceedings Eoin Hanrahan played Colm Walsh O’Loughlin clear and he let fly with a beauty to the top corner.

Shortly after Steve McGann scored the first of a hat trick when he converted a spot kick.
The same player tagged on another when he arrived at the back post to head in Danny O’Neill’s cross.

Pike were reduced to ten men when a handball saw Sean Madigan leave to a red card.

Newport were unsuccessful with the penalty kick but shortly after did find joy from the spot with Jay Ryan netting.
Before that however McGann completed his hat trick again from the spot.

Regional reached the open stages of the FAI Junior Cup with a 5-2 win over Athlunkard Villa at Lee Estate.

The scoreline suggests an easy ride for the Premier side but in truth the game was in the melting pot until the final 15 minutes when the fitter Dooradoyle side ran in three goals without reply.

Keith Kerley and Darren Roche had their team well prepped for the tie and were matching their opponents before Eoin Duff rocked them back on their heels with a long-range beauty following good work from Andy Cowpar.

Villa responded well and got back on level terms when some superb work by Christian Kerley saw the clubs top scorer fire in the equaliser from fifteen yards.

Regional were back in front before the break when Andy Cowpar got in front of his man to fire in a near post shot from Felipe Mostowy’s free kick.

The Premier side had plenty of opportunity but failed to build on their lead and paid the price when Famara Kassana fired in an equaliser.

Eoin Duff pounced again to restore Regional’s lead when he received from Kieran O’Connell through ball and lobbed the advancing keeper.
With Villa forced to chase the game, they left gaps at the back and Duff took advantage to complete his hat trick.

First half goals from Thomas O’Connor and Gbadebo Habideen put Balla in control and while the visitors upped the temp after the restart, the Blues withstood the charge.

Division 1A side Summerville Rvs will carry the hopes of the teams outside the Premier League after their 2-1 win over Moyross on Sunday.

Played in UL, Summerville, started well and took the lead when a superb ball over top by Steven Kiely picked out Craig Reddan who beat the defence but saw his shot blocked by Michael O’Donoghue but only as far as the inrunning Emanual Alfred who fired in the rebound from five yards. cored from 5 yards.

Moyross were back on level terms five minutes from the break when Adrian Mitchell scored at back post after a cross by Dean Mitchell.

Aisling Annacotty returned to winning ways on Thursday evening when they beat Janesboro 2-0 to qualify for the semi finals of the Tuohy Cup.

Aisling’s one and only success in the Premier League Cup was in 2016/17 and they are hopeful they can add their name to the famous trophy again.
They showed their intent seeing off a hard-working Boro XI to seal a clash with Carew Park for a place in the final.

Aisling took the lead when a long throw from Kennedy N’dip was flicked on by Shane Clarke and Liam Quinn headed home from close range.
The same player scored the second goal also. Blake Curran was quickest to react to a mishit defensive clearance and showed great composure to set Liam Quinn up on the edge of the area who rifled a right footed shot into the bottom corner.

Aisling’s hopes of keeping the pressure on the top two were dealt a blow when they were held to a draw at home to Nenagh.

The Tipperary side inflicted a 5-0 defeat on the Annacotty side a couple of weeks back in the Munster Junior Cup and Aisling were keen to gain some revenge.

After a even and scoreless first half, Aisling broke the deadlock eight minutes into the second half courtesy of top scorer Shane Clarke.
However, Nenagh were back on level terms within two minutes when, following good work by Saeed Ryan, Lee Mowatt struck the equaliser.

Janesboro’s desire for the points to break away from the drop zone looked to going to plan when Karl Turner fired them in front at home to Carew Park.

In the FAI U17 Cup Aisling Annacotty A had no answer to a rampant Pike Rvs who scored six through Aaron Cusack (2), Shane Franklin, Pat Nolan, Keith Corbett and an own goal. Dave Brennan replied for the hosts.

Chulainn Williams , Kyle McSweeney, Pauric Murphy and Cameron O’Grady scored for Fairview in their 4-1 win over Nenagh AFC for whom Michael Moylan netted.

Nathan O’Shea, Brian Nugent and Dan Malone scored for Boro B in a 3-2 win at Aisling while goals from William Hourigan, Robert Brock and Shane Byrne kept Caherconlish on course for honours in Division 1B.

The top three sides in Division 2A all won keeping the title race in the melting pot.

Aisling pipped Lisnagry A in a close encounter. Manni Ajuong and an own goal did the business for the winners.

Brazuca are tops in Division 3A following a 4-1 win at Mungret Reg D. Danny Galvin scored for the home side but goals from Lucas Silva (2), Rafael Henrique and Guilherme Augusto gave Brazuca the spoils.

The top game in Division 3B finished all square between Granville Rgs B and Carew Park B. Leonard O’Grady and Dylan Meehan scored for the home side. Derek Hanlon and Brennie Ghani replied for Carew.

Miley Cyrus and Dolly Parton Sing Moving Mashup of ‘Wrecking Ball’ and ‘I Will...

Ruben Randall - March 31, 2022 0
Actor
Daniel RadcliffePhoto: Monica Schipper (Getty Images)Sometimes the hottest take of all is simply not having a hot take. After a whirlwind few days...