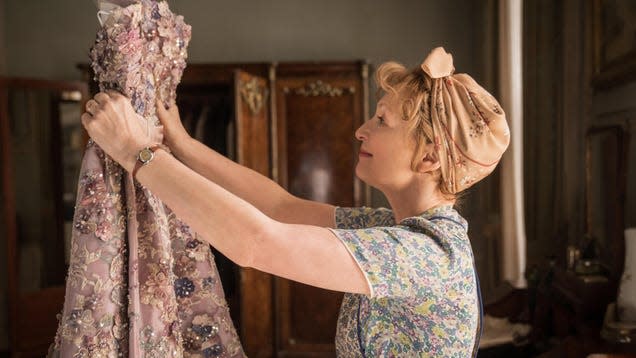 If only there were a way to bottle up the magic that is Lesley Manville, as British cleaning lady Mrs. Ada Harris, gazing at a Christian Dior gown. With a single look, Manville gets straight to the heart of Mrs. Harris Goes To Paris, the first big-screen adaptation of Paul Gallico’s hit 1958 novel Mrs. ’Arris Goes To Paris, co-adapted and directed by Anthony Fabian. Together with co-stars Isabelle Huppert, Lambert Wilson, Alba Baptista, Lucas Bravo, Ellen Thomas, and Jason Isaacs, costume designer Jenny Bevan, and the House of Dior itself, Manville and Fabian capture the peak of couture French fashion and the reverence it can cause in those who see it—or even, in one’s wildest dreams, wear it.

The actor and director joined The A.V. Club to discuss that historic collaboration with Dior, how Manville’s Oscar-nominated Phantom Thread performance served as a helpful precursor, and the “cat-and-mouse game” that filmmaking ultimately is.

The A.V. Club: So how did this, I would say, perfect pairing of actor and part come to be, of Lesley Manville and Ada Harris?

Lesley Manville: Oh, well, that’s nice, thank you. I was offered it and I said yes! Listen, I only say yes if I think the script is up to speed and the character’s interesting and something I would like to play. And lots of other [reasons], like knowing the period and knowing about clothes because of doing Phantom Thread, knowing what working class life is like, because that’s how I grew up. And just being charmed by Ada really, and thinking I’d quite like to do my version of Ada.

Anthony Fabian: Yeah. I mean, it’s a bit of a Cinderella slipper role. I think it really only fits Lesley’s shoe. But I’ve seen a lot of Lesley’s work before working with her and saw Phantom Thread and thought, Wow. And then I saw Mum, the series that she did for the BBC. Those two combined, I just knew that we would be in spectacular hands if Lesley said yes.

AVC: Lesley, in terms of understanding the character of Mrs. Harris, did Phantom Thread help give you a better appreciation for the labor and detail of couture that she’s obsessed with?

LM: Certainly that film made me understand absolutely the labor of couture, that it’s a slow, detailed process. And also the appreciation, just the absolute beauty of a dress that is made to measure, exquisitely made to fit you and you alone, and the wonderful materials and embellishments that are used. And I’ve always liked clothes myself. I appreciate a lovely piece of tailoring or a dress just for its pure aesthetic value. So yeah, I did have a fuller understanding. But in a way, Ada is looking at all of those things but then she also isn’t. She’s just going, Oh, that is a thing of beauty, and I would like to have that. And why should that just be exclusive to people like Lady Dant who can afford it? The only thing that’s in the way of Ada and this dress is 500 quid!

AF: I think Ada also has a special appreciation of this dress because she is a dab hand with a needle and thread herself.

AF: So she knows what’s involved and how difficult it is to do it well. 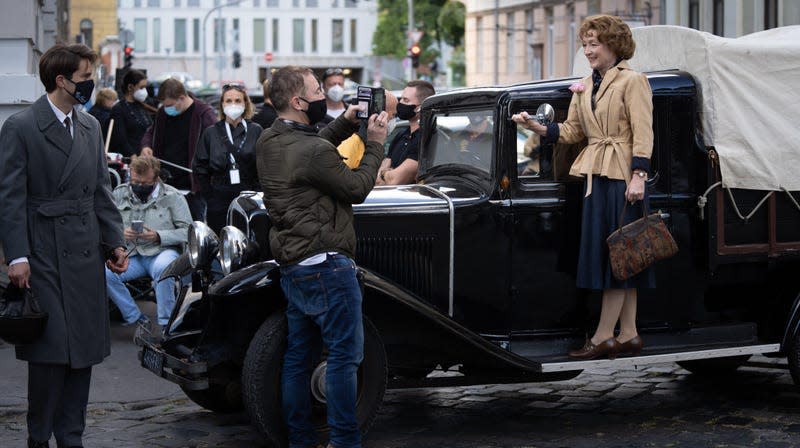 AVC: From the moment Mrs. Harris sees the fashion show in the Dior shop, it becomes apparent this film is using authentic, period-specific couture. How did that collaboration with Dior come to be and how did you navigate it?

AF: I knew that getting Dior involved early was key to making this film. Because, as you say, we wanted to do it authentically and accurately. So I went to them very, very, very early on and told them about it. And obviously they knew the story because it’s part of Dior’s history; Mrs. ’Arris Goes To Paris has been in the lore of Dior for 50 years. But their main concern was, were we going to do it at a high enough level that would justify their brand being attached to it? And once we had Lesley and Jenny Bevan and Isabelle Huppert, they were reassured that we were doing it at the right level. And the doors were flung open. They’ve got an entire building devoted to their heritage and an archivist who is in charge of their history. They’re very, very proud of their heritage, as they call it. We had a meeting and they asked brilliant questions: What year is the film set in? What show do you want to recreate? And they brought out file after file of all of the dresses. There were 250 dresses in each show! It wasn’t like we have, about 15 or 20. So we had to sort of select among them. And then we’d also made the decision that this was going to represent Dior’s output across those 10 years because it was the 10th anniversary collection. So there would be five or six dresses from an earlier period, and then the main concentration from the ’57 spring-summer collection, which was very well documented. And then we had to build a journey and a story across the fashion show, which starts with daywear, then cocktail dresses, then evening wear, and ends with that wedding dress, which is what Christian Dior always did in his shows.

AVC: And was there any danger in damaging the clothes? Is there any fear of, I don’t know—

LM: What, spilling your coffee down them? Yeah. At lunchtime, we were given these [smocks]—as if we were dressing up to do a surgical operation, to cover up our clothes in case we spilled anything. But they do look like porcelain, they look so fragile and beautiful, just stunning.

AF: And we were lent five dresses that were reproductions made by Dior themselves. But the conditions attached to that were that the models couldn’t wear any makeup near the dress. They couldn’t wear any perfume near the dress. They are very fragile objects. And they didn’t want them ruined or torn. And they had to be the right size and they couldn’t be altered. So there were a lot of restrictions attached to that loan, but it all worked out.

AVC: Do you both have a favorite scene or moment from the film?

LM: I love the scene when she’s in the atelier having her first dress fitted. I just love the way we shot it. And playing that delight, that’s everything that Ada wanted. She just wanted to get one of these dresses on. And the feeling that that gives her was just lovely to play. And I was sort of on a podium and we did it as a kind of circular, revolving shot. It was very simple, but it was just a good coming together of the right camera moves to tell the story for the right moment.

AF: It’s hard for me to pick out a favorite moment, because there are so many wonderful emotional moments. But I always have a surge of emotion after Ada has struggled so much to finally buy her dress and all these obstacles in the way of making that happen. And she walks into the fitting room, and all of the seamstresses applaud her. And I don’t know why, but I just find that so immensely moving, their appreciation of what she’s achieved. 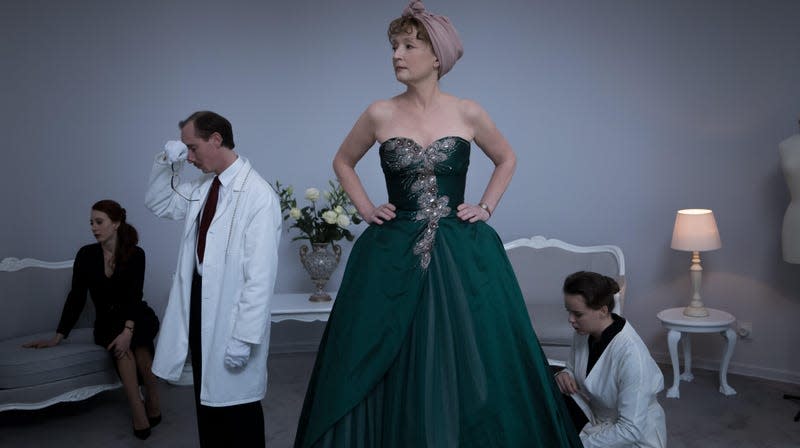 AVC: Were there films or other sources of inspiration that informed the making of Mrs. Harris Goes To Paris?

AF: Yes, 100 percent. I felt that the film was like a musical without the singing or musical numbers. So my inspirations were mostly musicals and particularly from the ’50s and ’60s. So I looked at My Fair Lady, The Umbrellas Of Cherbourg, Funny Face. Funny Face astonished me because it was made in the same period as this film, but it’s incredibly modern. And that was very important because I wanted to create something that was both accurately period, but also felt fresh and modern. Those were the inspirations.

AVC: Lastly, I’m always curious about the chemistry between an actor and a director, particularly if they’re working together for the first time. What would you say makes an ideal collaboration?

LM: Directors come in all shapes and sizes, they really do. And you have to just dive in, really. Unless I’m working with directors that I’ve worked with before, obviously, you can never really know what that’s going to be like. So you can imagine how things might be, but actually you never really know until you’re on the floor and trying to get to grips with things. So it’s a risk for both parties. Tony doesn’t know whether I’m going to be somebody who doesn’t turn up prepared or somebody who’s very prepared and overly thought through and then very dogged. It’s a kind of cat-and-mouse game for a little bit, but you get there in the end.

AF: Yeah. Every actor has a different way of working. And as a director you have to try to find the right frequency to be able to work with that performer. But I would say there’s a pretty simple formula for doing good work: You make the best possible script that you can and then you cast Lesley Manville.

Ruben Randall - July 10, 2022 0
Celebrity
The Cleveland Cavaliers have a promising young core and are looking to build upon it this offseason. The Cavs had guard Darius Garland...