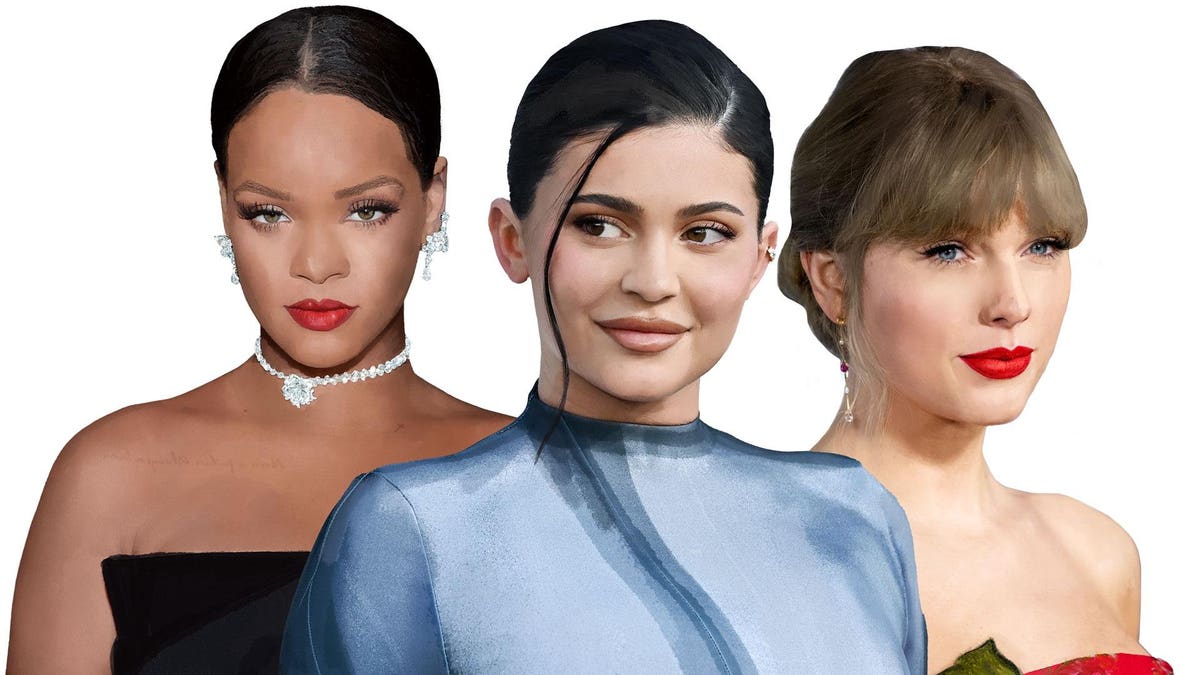 ILLUSTRATION BY STEPHANIE JONES for forbes

These youthful entrepreneurs, executives and entertainers run the gamut from artificial intelligence entrepreneur to dating app cofounder to a tennis star. Three of them are newcomers this year.

For the fifth year in a row, Kylie Jenner is the youngest member of Forbes’ list of America’s Richest Self-Made Women–a ranking that captures the entrepreneurial success and the fortunes of the 100 richest, most successful women in business.

Jenner, part of the extended Kardashian clan and the founder of Kylie Cosmetics, is–at age 24–one of just 11 people on the new 2022 Forbes list who are under age 40. This young cohort ranges from pop stars like Taylor Swift to Bumble dating app cofounder and CEO Whitney Wolfe Herd. Altogether, the under 40s are worth an estimated $6 billion–5% of the list total of $111 billion.

Jenner ranks No. 41 on this year’s list, up from No. 51 in 2021–though Forbes estimates that her fortune has declined by about $20 million from a year ago to $600 million, partly due to the drop in values of cosmetics firms amid the spring stock market rout. In addition, the frenzied buzz about Jenner’s Kylie Cosmetics appears to have waned. Jenner sold 51% of her company to beauty giant Coty in 2019 and walked away with an estimated $540 million (before taxes); one analyst tells Forbes that some data indicate online sales of Kylie Cosmetics have plunged by as much as 50% in early 2022 compared to a year ago. Coty says the relaunch of Kylie Cosmetics has been strong but doesn’t break out the unit’s revenues.

Three of America’s youngest self-made women are new to the ranking this year. Rachel Drori, who founded plant-based frozen meal delivery company Daily Harvest, is 39. She debuts after investors valued her company at $1.1 billion late last year. Emma Grede, CEO of fashion brand Good American and founding partner and chief product officer of Kim Kardashian’s shapewear firm Skims, is also 39. She joins the list at No. 77, and is the second-youngest Black woman on the list, with an estimated $360 million fortune. Also new is the second-youngest self-made woman, 27-year-old Lucy Guo, who cofounded artificial intelligence firm Scale AI and held onto a stake after she left; the firm is now valued at $7.3 billion.

Another of the youngest: Barbados’ first billionaire, 34-year-old Rihanna—whose 50% stake in makeup line Fenty Beauty makes her, along with Grede, one of two Black women under 40 to make the list. She comes in at No. 21 with a $1.4 billion net worth—$300 million less than last year, due to the drop in market value of cosmetics firms. Still, Rihanna is the only woman under 40 on this list who’s a billionaire.

Whitney Wolfe Herd’s reign as the world’s youngest self-made billionaire lasted just ten months last year. Shares of dating app Bumble plunged nearly 65% from their initial public offering in February 2021 through our measurement date of May 13, 2022, despite 24% revenue growth in the first quarter this year. Wolfe Herd comes in at No. 33, with a $740 million fortune—$560 million less than last year.

See also  Here Is Her Success Story of Becoming a Millionaire!

Former tennis player Maria Sharapova has rejoined the rank after dropping off in 2021. Brand endorsement deals and savvy investments land her at the No. 97 spot, with an estimated $220 million fortune, making her the only athlete under 40 on the list. Rachel Carlson, whose company Guild Education has landed contracts with big names like Disney, Walmart, and Chipotle over the past few years, owns an estimated 15% of the company, landing her at the No. 54 spot this year. After Forbes finalized our list, Guild Education raised $175 million from investors, who now value the company at $4.4 billion, up from $3.75 billion last year.

Two of the 13 women who were under 40 on the 2021 Self-Made Women list no longer make the under-40 club this year due to age. Pop star Beyoncé and tennis great Serena Williams both turned 40, though each still make the self-made list, with fortunes of $450 million and $260 million, respectively.

Here are the richest self-made women under 40.

Fortunes were calculated using stock prices from Friday May 13, 2022.

Jenner, half-sister to Kim Kardashian and longtime member of the cast of the former TV show “Keeping Up With The Kardashians,” started her makeup business Kylie Cosmetics in 2015 with $250,000 earned from modeling and expanded it by marketing to her 110 million Instagram followers. In early 2020, she sold a 51% stake in the company to publicly-traded Coty for $600 million; Forbes estimates that she got $340 million after paying taxes. Last year they introduced paraben-free and vegan formulas, but the popularity of the product seems to have waned. That and the stock market plunge, which pushed down values for the cosmetics sector, led to Jenner’s fortune declining to an estimated $600 million this year, down from $620 million last year.

Guo debuts thanks to a nearly 6% stake in artificial intelligence startup Scale AI, which was valued by private investors at $7.3 billion in 2021. She studied computer science at Carnegie Mellon but dropped out to become a Thiel Fellow; while working at question-and-answer website Quora, she met Alexandr Wang, with whom she cofounded Scale AI. The pair made the Forbes Under 30 list in 2018, the same year Guo left the company. She cofounded early stage venture capital firm Backend Capital in 2019 and in April this year launched Moment, which she describes as a “web3 platoform for creators to scale their content.”

The pop star, who has nearly 56 million monthly listeners on Spotify, made history in 2021 by notching four No. 1 albums in less than 16 months. She managed the feat by re-recording two of her early albums as Red (Taylor’s Version) and Fearless (Taylor’s Version), in response to the sale of her original catalog to a private-equity group without her knowledge. Swift has the rights to these new master recordings, allowing her to rebuild her catalog. The singer-songwriter still owns publishing rights to her early work, worth an estimated $200 million.

See also  Elizabeth Warren on Biden's student-debt relief: 'Sure I argued for more' but it should be celebrated

Wolfe Herd’s reign as the world’s youngest self-made female billionaire lasted just 10 months, from February through November 2021. Shares of Bumble, the dating app she cofounded and runs, have plunged nearly 65% from their February 2021 initial public offering through our measurement date of May 13, despite 24% revenue growth in the first quarter this year. Wolfe Herd launched Bumble in 2014 with financing from Russian billionaire Andrey Andreev; he sold his stake to Blackstone Group in 2019, following a Forbes investigation into Badoo, a dating company he founded.

Denver-based Guild Education, which Carlson founded and runs, helps firms retain and upskill their employees by providing, among other benefits, the chance to earn a debt-free college degree. The number of workers with access to its courses increased 50% over the past year, bringing its learning base to 5 million. Among its newest customers: PepsiCo, Kohl’s and Hilton. Carlson owns an estimated 15% stake in Guild, which was valued at $3.75 billion in June 2021.

Source of wealth: Music and cosmetics

Barbados’ first billionaire was named a National Hero on November 30, the same day the island nation became a republic. She followed that with a win for her Savage X Fenty lingerie company in January, when the brand raised $125 million; it is now reportedly weighing a $3 billion (est. valuation) IPO. The pop star-turned-cosmetics mogul, who owes most of her fortune to her 50% stake in Fenty Beauty, gave birth in May to her first child, with boyfriend rapper A$AP Rocky. She also has nine Grammy wins and 14 No. 1 Billboard Hot 100 hits.

The onetime tennis star, who left the court in 2020, continues to endorse brands including Nike, Evian and Porsche and runs her own candy business, Sugarpova. Since early 2021, she has picked up equity stakes in home gym startup Tonal, investing platform Public.com and MoonPay, which helps users trade cryptocurrencies, in exchange for promoting those brands. She also joined the board of Italian billionaire Remo Ruffini’s fashion brand, Moncler.

The former LinkedIn software engineer left in 2014 to cofound Confluent, a cloud software company that went public last year at a $9.1 billion valuation. She stepped down as its chief technology officer in 2019 (she still serves on its board) and now advises and invests in startups such as deep learning firm Exafunction and data infrastructure provider Metronome. Shares of Confluent plunged 50% since the 2021 list.

The chair of Huda Beauty is looking to expand her $200 million (est. 2021 revenue) cosmetics company by adding new skin care and fragrance lines. She sold a minority stake in the business to private equity firm TSG Consumer Partners in a 2017 deal that valued it at $1.2 billion. The makeup artist-turned-blogger is now also seeding other startups, including edtech app Uptime and social audio app Clubhouse, through Dubai-based HB Investments.

Grede is the cofounder and CEO of Good American, the size-inclusive fashion brand she launched with Khloe Kardashian in 2016. She is also a cofounder of plant-powered cleaning brand Safely with No. 93 Kris Jenner and a founding partner and chief product officer of No. 16 Kim Kardashian’s Skims, where Grede’s husband is CEO. Raised in East London by a single mother, Grede started a paper route at age 12 and saved her pennies to buy fashion magazines. She founded marketing agency ITB Worldwide in 2008 and is the first Black woman to serve as an investor on the popular ABC series Shark Tank.

The former Gilt Groupe marketing executive started frozen meal delivery service Daily Harvest in 2015, funding it with $25,000 from her savings. She began making smoothies on weekends in a commercial kitchen leased in Queens, paying her teenage nephews $20 a night to deliver them in Manhattan. Pregnant with her first child, she pledged that she wouldn’t quit her day job until orders from strangers outweighed friends and family’s purchases fivefold. It took two months. In November 2021, Daily Harvest, which now sells frozen bowls, parfaits, flatbreads and more, raised $100 million from private investors at a $1.1 billion valuation; Drori owns an estimated 35% stake. Celebrity investors include Gwyneth Paltrow, Serena Williams, snowboarder Shaun White and chef Bobby Flay.

Joe Burrow contract details, net worth: How Bengals are cashing in...