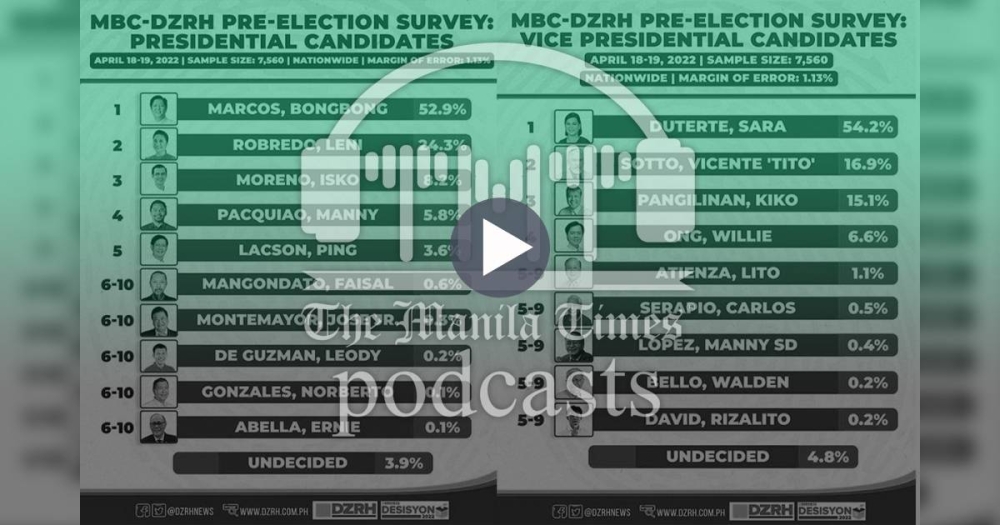 Good day. Here are the stories for The Manila Times for Saturday, April 23, 2022.

JULIUS Anthony “Jun” Zaide believes that if the 16 barangay (villages) of Parañaque City link up and work together, they could be a force that would be more effective in responding to community issues like the coronavirus pandemic. Zaide, chairman of Barangay Baclaran in Paranaque’s first district, plans to harness “barangay power” if he is elected mayor on May 9. Speaking during The Manila Times roundtable Friday at the Barangay Baclaran hall, Zaide said he would “make Parañaque even better” by strengthening cooperation between village officials. He stressed that there must be an equal distribution of opportunities, basic necessities and beneficiary services in order to trigger hope and determination among Parañaque constituents who were affected by the pandemic.

READ: ‘Give us clean, honest polls’

WITH more than two weeks before May 9, President Rodrigo Duterte appealed to all political candidates to strive for “clean and honest” 2022 national and local elections, saying failing to do so would be an “insult” to the people. Duterte cited the need to uphold the sanctity of the ballot as he reiterated that he would remain neutral in this year’s race for President. The Philippines will hold its national and local elections on May 9 — the country’s first national elections during the Covid-19 pandemic. Despite his non-endorsement of a candidate for the presidency, Duterte has expressed his support for the candidacy for vice president of his daughter, Davao City Mayor Sara Duterte-Carpio. Duterte-Carpio, running mate of frontrunner Ferdinand “Bongbong” Marcos Jr., on Thursday also appealed to every Filipino in ensuring the conduct of “honest, orderly and peaceful” polls on May 9. She made the appeal after three candidates for president claimed about possible attempts to destabilize the May 9 polls if Marcos wins the presidency.

The Commission on Elections (Comelec) on Friday announced that it has decided to postpone town hall debates for presidential and vice presidential candidates originally scheduled this weekend amid financial issues between its private partner and the hotel venue of the first debates. Comelec Commissioner George Garcia said they have rescheduled the events to April 30 and May 1. The debates were initially scheduled on April 23 and 24. It was first reported that Vote Pilipinas, the Comelec’s private partner, failed to settle its debt worth P14 million to Hotel Sofitel, the venue for the first debates.

A RECENT online survey showed that unemployment, education, health care, and poverty are the major problems confronting the next president. The survey was conducted by YouGov and Synergy Market Research+Strategic Consultancy, its exclusive partner in the Philippines from a panel of Filipinos. Nearly one in every 4 respondents (ranging from 35 to 38 percent) reported that the earlier mentioned topics are urgent issues, followed by graft and corruption at 34 percent, and the Covid-19 situation in the country at 25 percent.

Over to business, credit standards for corporate loans are expected to tighten this quarter, while those for household loans are anticipated to loosen, the Bangko Sentral ng Pilipinas (BSP) said. In its Q1 Quarter 2022 Senior Bank Loan Officers’ Survey, the central bank reported that the diffusion index (DI) approach showed “expectations of net tightening loan standards given increased uncertainty in economic growth outlook, reduced risk tolerance, and a deterioration in borrower’s profile and bank’s portfolio” for the second quarter of the year.

In sports, Philippine Table Tennis Federation President Ting Ledesma is optimistic that the national team will have a better performance in the 2022 Vietnam Southeast Asian Games (SEAG). Despite winning only one medal — a bronze courtesy of Richard Gonzales — in 2019, Ledesma is sending an almost intact team, which he believes, deserves another chance. Joining Gonzales in the men’s team are 2018 Youth Olympics veteran Jann Mari Nayre, former UAAP MVP John Russel Misal, John Michael Castro and Japheth Adasa. The women’s team is composed of Kheith Rhynne Cruz, Angelou Joyce Laude, UAAP back-to-back MVP Emy Rose Dael, and newcomers Sheryl May Otañes and Keziah Bien Ablaza, who filled up the slots vacated by Rose Jean Fadol and Jannah Romero. Seven gold medals are at stake in table tennis at the SEAG. Events on tap are men’s and women’s singles, men’s and women’s doubles, mixed doubles and team. The Philippines has entries in all events.

Today’s editorial believes intervention by the Metro Manila Council or the Office of the President should intervene to stop the Metro Manila Development Authority (MMDA) from imposing controversial measures on provincial bus operators. Read a full version on the paper’s opinion section or listen to the Voice of the Times.

For more news and information, get a copy of The Manila Times on print, subscribe to its digital edition or log on to www.manilatimes.net.

On behalf of The Manila Times, this is EJ Gomez reporting.

Ruben Randall - June 29, 2022 0
Money
The time-bending, variant-heavy Loki was a heady watch from start to finish, but never quite so chaotic as the moment in episode 5 when...