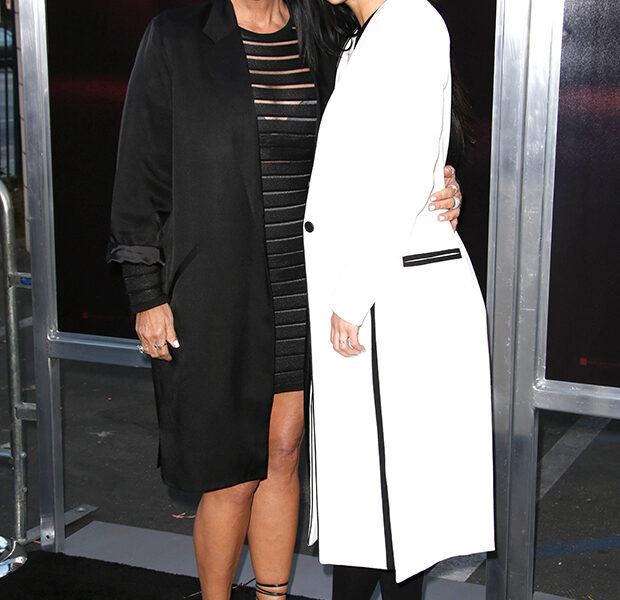 Kris Jenner66, cleared the air about whether or not she released her daughter Kim Kardashian‘s sex tape with Ray J back in 2007. The self-proclaimed “momager” got hooked up to a lie detector machine during an appearance on The Late Late Show With James Corden on Sept. 8 with Kylie Jenner, 25, who assisted with grilling her mom alongside the host. Kylie got a sneak peak at the card bearing the sex tape question before James asked, eliciting an “oh my god” from the Kylie Skin founder as dramatic music played.

“Did you help Kim release her sex tape?” James then bluntly asked. Kris laughed and shook her head as she exclaimed, “It’s okay” and answered “no…no” directly into the camera. It turns out she was telling the truth! “We cleared that up,” she then said before moving onto the next question.

Kris and Kylie appeared on the show to promote the new Kylie Cosmetics line, the Kris Collection, which drops on Sept. 14. The mom-and-daughter duo’s second collaboration comes over four years after they launched the Momager collection on the site back in 2018. And the two ladies looked absolutely gorgeous on the Thursday night episode of the late-night talk show! Kris wore a black-and-white houndstooth suit, while Kylie channeled the ’80s in a gorgeous red Versace dress and platform heels.

Just days before Kylie and her momma appeared on the show, they took to the 25-year-old’s TikTok to show off their martini-making skills, as that is also a part of the collection’s theme. Kris taught her makeup-obsessed daughter how to create the perfect cocktail while celebrating their new beauty collection together. Kylie captioned the fun post, “Can’t wait for you guys to see the new kris collection coming soon.” During the clip, the mom-of-two appeared playful and happy to be spending some quality time with her amazing mom. Kylie dropped her lip to the cocktail shaker, while Kris joked, “It’s ok, just pretend like you meant to do it!”

The stylish collection was revealed on the Kylie Cosmetics Instagram on Sept. 7, and detailed the iconic martini-themed beauty products. Kris’ collection with Kylie includes a total of five glamorous makeup products including a Lip Serum, Curetini Undereye Patches, Pressed Powder Palette, Matte Lip Crayon Set, and a Blush and Highlighter Cheek Duo. Kylie and Kris lovers will surely be ready to look as glammed-up as ever with this bundle of beauty!

And while the Kris Collection does not launch until Sept. 14, many of their fans are already anticipating the product launch. The former billionaire released an exclusive behind the scenes look on Sept. 7, from the collection’s photoshoot. She captioned the Instagram post, “THE KRIS COLLECTION ROUND 2 coming September 14th!!! i love collaborating with you mommy @krisjenner @kyliecosmetics.” Kylie’s 368 million followers took to the comments section of the post to share their excitement. One fan wrote, “Beautiful daughter with beautiful mom”, while another chimed in, “Slay krissie baby.”

Kylie first launched her makeup line, Kylie Cosmetics, back in November 2015 with her iconic Kylie Lip Kits. Since then, the youngest sister of the KarJenner crew has expanded from lip kits into a myriad of beauty products. Her website lists not only Kylie Cosmetics, but Kylie Skin and Kylie Baby in its offerings. Her beauty brand has created much success for Kylie, as she officially became a billionaire in March 2019, however, her net worth has since fallen to $600 million, according to Forbes.

Nepo babies stepping out of parents shadows: From Gemma Owen to Brooklyn Beckham and...

With a Combined Net Worth of $850 Million, Shaquille O’Neal and Arnold Schwarzenegger Were...

Ruben Randall - June 26, 2022 0
Money
Elon Musk, Lebron James, and Rihanna are among the billionaires with the largest Twitter followings....

Who is the richest person in the world? Top 10 richest...