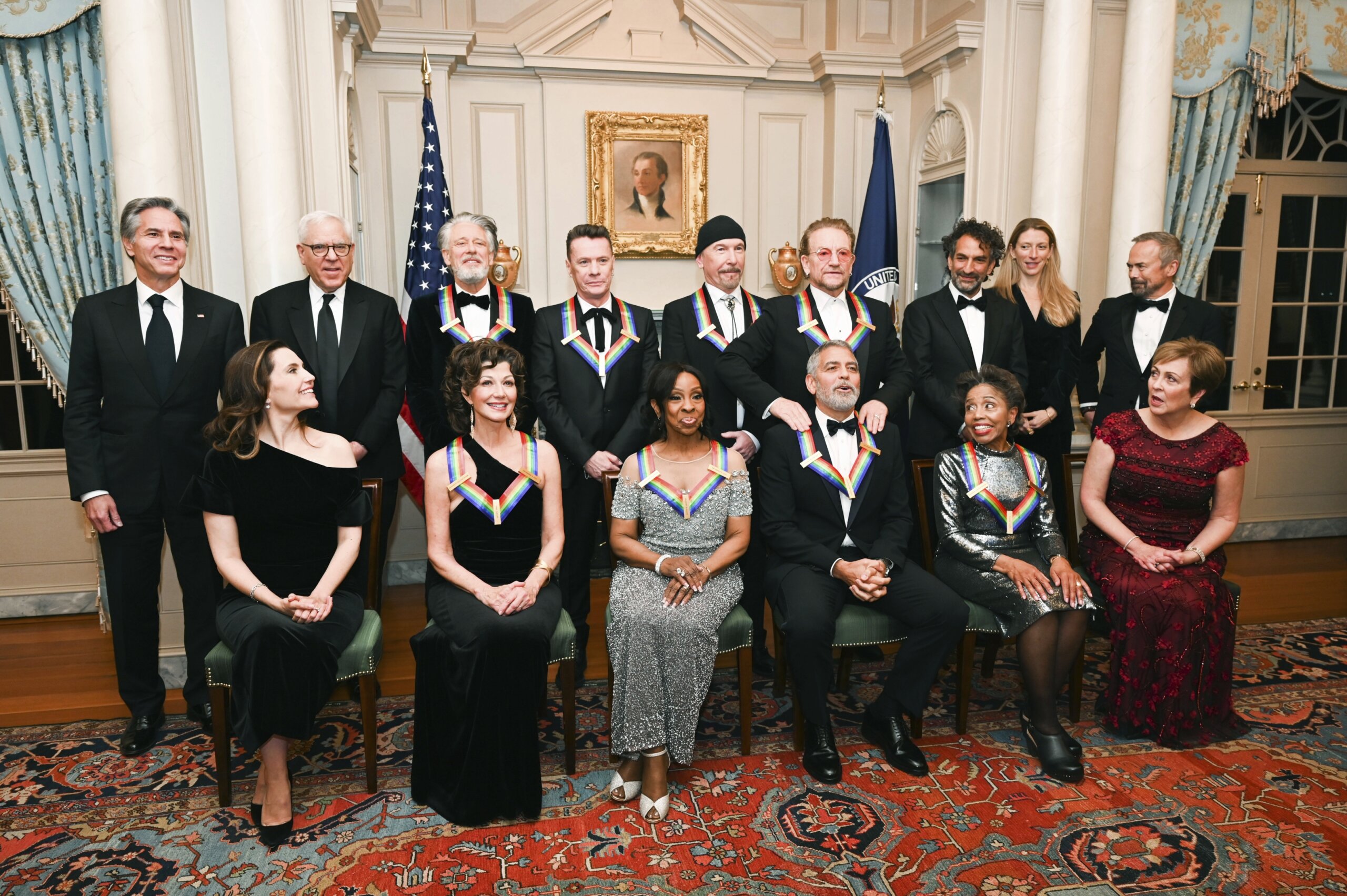 Performers such as Gladys Knight or the Irish band U2 usually would be headlining a concert for thousands but at Sunday’s Kennedy Center Honors the tables will be turned as they and other artists will be the ones feted for their lifetime of artistic contributions.

Knight, Clooney, Grant, León and U2 were all celebrated at the John F. Kennedy Center for the Performing Arts, which annually honors a select group of people for their artistic influences on American culture. President Joe Biden, Vice President Kamala Harris and their respective spouses were in attendance, as were members the President’s Cabinet and Congress.

One audience member from the political world — Paul Pelosi, husband of House Speaker Nancy Pelosi — drew some attention. He is recovering from a brutal attack in the Pelosis’ San Francisco home in October. The couple received a standing ovation from the crowd.

Normally performers like U2 or Knight would be headlining such a show, but during the Kennedy Center event the honorees sit in the balcony and watch as their peers laud them and perform their works.

On the red carpet, Clooney, with his wife, Amal, beside him, joked that after seeing friends like Don Cheadle and Julia Roberts in attendance he was worried his tribute would be more of a “roast.” And it was a bit like that, though his friends and family showed obvious respect.

Roberts set the tone by coming out onstage with a dress emblazoned with photos of Clooney. After an introduction that alternated between funny and heartfelt she turned to a set designed to look like a smoky bar — the type Clooney might enjoy. The actor’s father, Nick Clooney, regaled the crowd with stories of a young George, including the time the 7-year-old — heartbroken over the assassination of Martin Luther King Jr. in 1968 — gave his father all his toy guns.

Damon took the funny road, joking about how Clooney once stole then-President Bill Clinton’s stationery and wrote notes to fellow actors on it. Cheadle highlighted Clooney’s philanthropic work. But it was Clooney’s father who probably had the strongest praise, telling the crowd and his son, sitting in the balcony between León and U2’s Bono, “George’s best and most important work is still ahead of him.

Standing on a stage lit by a massive sign reading “Gladys,” LaBelle called Knight her “everything,” saying they had been friends for six decades and had seen each other through laughter and tears. “We do everything together,” LaBelle said. “I am honored to honor you tonight.”

Actor and hip-hop star LL Cool J said that whenever Knight sings she connects with people. “I once heard Gladys sing the ABCs and I thought I was in church,” he said.

Knight — usually with her backup singers, The Pips — has recorded dozens of albums with such classic hits as “I Heard It Through the Grapevine” and “Midnight Train to Georgia.” The challenge of singing that classic in front of the woman who made it famous fell to country music superstar Garth Brooks, who is a Kennedy Center honoree in his own right. He cited Knight’s “roots in country music” before launching into the classic.

“Amy also taught me that it was possible to be funny, irreverent and Christian all at the same,” said Crow.

Five ballet dancers took to the stage to honor composer and conductor Tania León, who left Cuba as a refugee in 1967; her passport was stamped “Cancelado” when she left the country. The performers were from the Dance Theatre of Harlem, which León helped found when she eventually made her way to New York City. She also instituted the Brooklyn Philharmonic Community Concert Series and in 2021 received the Pulitzer Prize for her work “Stride,” inspired by women’s rights champion Susan B. Anthony.

The last honoree of the night was U2. In a video taped Saturday, U2 guitarist The Edge noted that a group of four “Irish lads” were being honored for contributions to American culture and said there’s a bond between the group and America that can’t really be explained.

Pearl Jam’s Eddie Vedder sang U2’s “Elevation” and “One.” Comedian Sacha Baron Cohen brought his alter ego Borat to the stage as part of the U2 tribute, pretending to mistake Biden for former President Donald Trump. Singers Brandi Carlile, Hozier and Jamala — from the U.S., Ireland and Ukraine, respectively — closed out the show with an emotional version of “Walk On.”

U2’s Bono is also known for his philanthropic work to eradicate poverty and to raise awareness about AIDS. Jamala, whose home country of Ukraine has been embroiled in nearly a year of bloody warfare after the Russian invasion, touched on that history of social activism as she introduced the night’s final song.

“It’s fitting that on the night meant to honor them they have once again used their platform to spread a message of peace. Honestly to be here in this bright warm hall this evening is really something extraordinary for me, when there is so much darkness in my home country Ukraine,” she said.

The honorees came to the theater from a White House reception where Biden praised them before a star-studded East Room crowd as an “exceptional group of artists.”

“Thank you for showing us the power of the arts and ‘We the People,’” Biden said.

Copyright
© 2022 The Associated Press. All rights reserved. This material may not be published, broadcast, written or redistributed.

Teen Mom star Vee Rivera stuns as she shows off her...