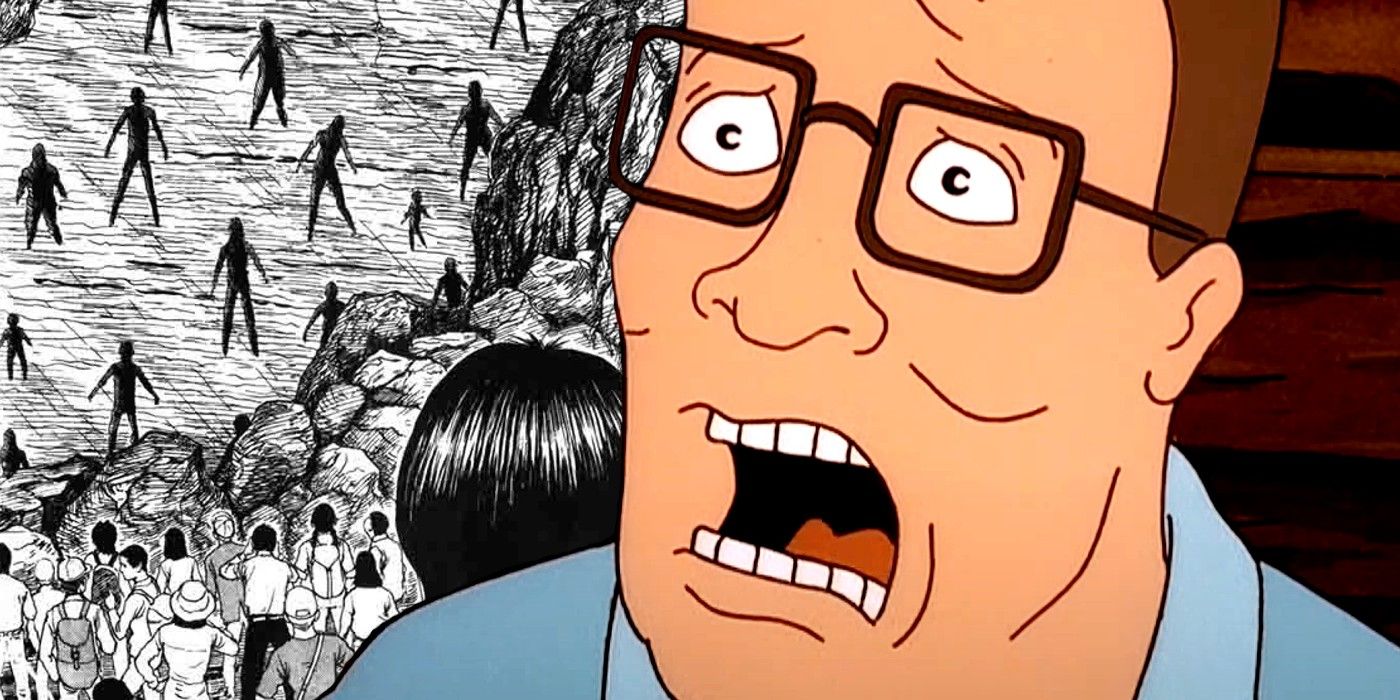 In a series of hilarious art pieces, fans get a glimpse of what would happen if the King of the Hill characters were in the horror world of Junji Ito.

Warning: this article contains imagery some readers may find disturbing.

An artist for the upcoming 2023 Teenage Mutant Ninja Turtles film has taken the iconic works of horror manga legend Junji Ito and blended them with the classic sitcom King of the Hill in hilarious new artwork. King of the Hill continues to bring delight to fans after over a decade of being off the air. Even though the show came to an end, people still remember the adventures of the Hills and their Arlen community. It remains so popular in fact that creator Mike Judge has announced that a King of the Hill revival is in the works and will feature a time jump. It’s a show that has certainly stood the test of time.

Junji Ito is also a creator whose works have become beloved by fans across the globe, though for very different reasons. His horrific style gives readers a glimpse into the uncanny as he specializes in body horror and the realm of the supernatural. One of his most famous works is Uzumaki, which follows a town cursed by spirals to the point that people’s bodies begin to warp – soon to get an official anime adaptation on Adult Swim. Outside of Uzumaki, Ito is also well-known for his short fiction. These range from tales about mysterious holes forming in mountains, tempting people to climb inside, to an underappreciated story that redefines nightmare fuel with puppets. Ito’s style has become influential around the world, and it shows with this unexpected crossover with King of the Hill.

Woodrow White, a visual development artist for the upcoming Teenage Mutant Ninja Turtles film, began posting pieces of artwork on Twitter that brings the two unexpected properties together. In these images, White takes the lovable cast of Arlen, Texas and throws them into the terrifying world of Junji Ito. As of now, only two of Ito’s stories – Uzumaki and The Enigma of Amigara Fault – have been referenced, but they’re great choices. It’s surprising to see how well the style of King of the Hill meshes with the horrific world of Ito. Seeing fan favorite characters like Bill Dauterive, Dale Gribble and Boomhauer become distorted to match the manga artist’s signature style is both hilarious and awe-inspiring.

Responding to fans about the images, White reveals the images use, “Junji Ito’s illustrations and screengrabs from KOTH, with some minor drawing here and there from me.” Given that White managed to make the Hill family and their friends blend so seamlessly into Ito’s world, it’s amazing to see that so little has been changed, with King of the Hill’s art style blending bizarrely well with Ito’s world. They look like they actually belong on these pages. It’s incredible to see how just a couple little tune-ups can take two radically different properties and make them look like they were always meant to have a crossover.

As of right now, White has only created a few of these hilarious pieces, but with Junji Ito’s never-ending well of inspiration, hopefully more are on their way. Stories like Hanging Blimp and Marionette Mansion would be just a few of Ito’s scariest stories that could get an Arlen, Texas twist. TMNT artist Woodrow White has created something special with these King of the Hill and Junji Ito mashups, and they show that even the most horrific artwork can get a hilarious spin under the right circumstances.

Next: Junji Ito’s Weirdest Horror Manga Was About His Own Cats

10 Prequel Shows and Movies That Are Better Than the Original, Including ‘House of the Dragon’