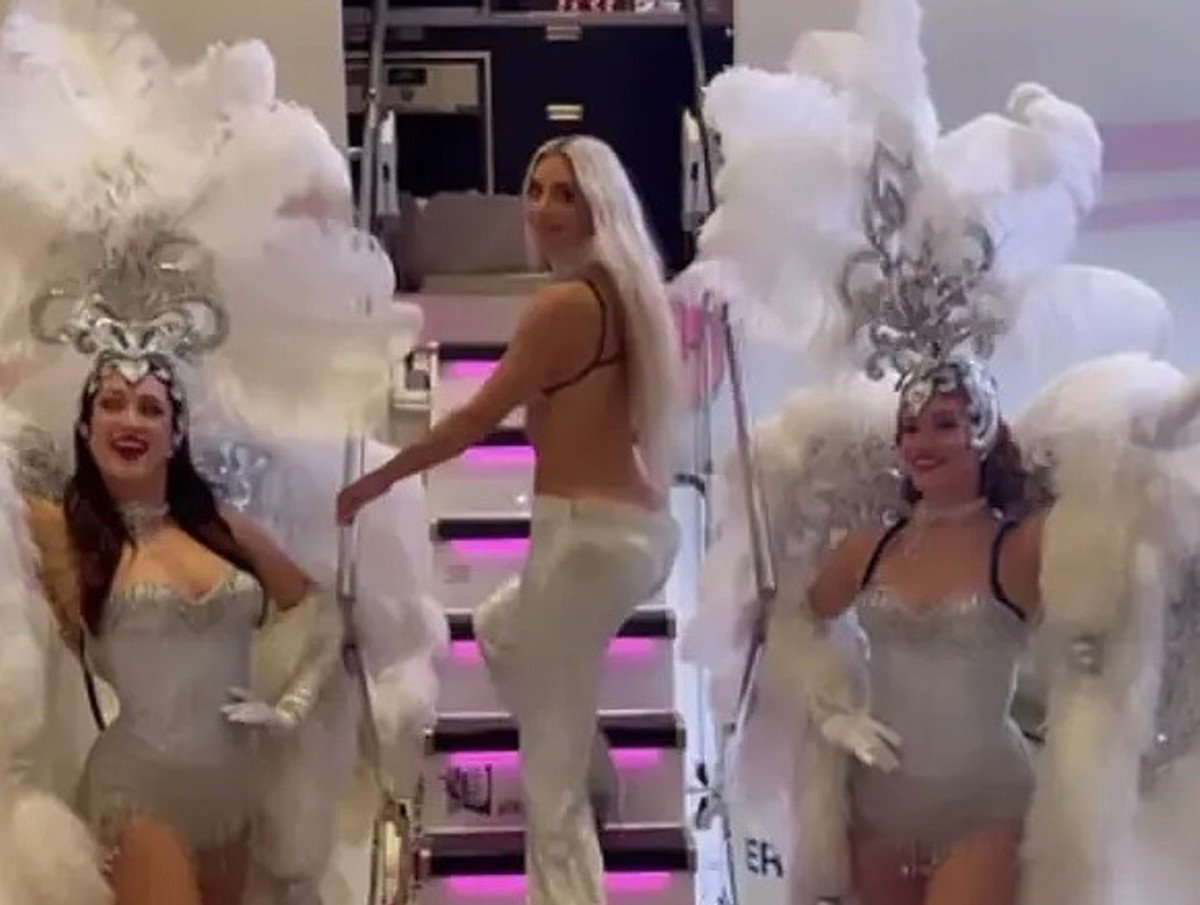 Kim Kardashian’s lavish plans to celebrate her 42nd birthday in Las Vegas were crushed by high winds. Gusts of up to 60 mph prevented the private jet carrying the billionaire, her sister Khloe, and her mother Kris Jenner from landing on Saturday night. “Kylie Air” – loaned for the occasion by Kim’s sister, Kylie  Jenner – attempted two landings that air traffic control advised the pilot to abort.

After being greeted by a pair of models dressed as showgirls, Kim boarded the jet and learned the details of her birthday celebration, which until then had been a surprise. The passengers were to join friends for a dinner at Aria’s Carbone Italian restaurant, followed by taking in Usher’s “My Way” residency at the Park MGM’s Dolby Live theater.

“Vegas baby!” an excited Kim reportedly told the camera as she was filmed boarding the white jet clad in a glittering diamond-encrusted bra and flared trousers while two showgirls waved her on.

Alas, the universe had other plans.

“The plane couldn’t land due to the wind, so looks like our Carbone party and @usher concert isn’t happening and we are heading back home,” Kardashian, who turned 42 last Friday, wrote on her Instagram account.

This was the same wind that caused organizers of the “When We Were Young” music festival to cancel its first day of performances.

After landing back in LA, the heartbroken Kardashians and their friends consoled themselves by renting a party bus, heading to In-N-Out Burger, and then improvising a “low-key party” at Kim’s office space in Calabasas, according to TMZ.

All the high drama was broadcast to fans in real time via Kim’s Instagram account, and will almost certainly be featured in an upcoming episode of “The Kardashians” reality show on Hulu.

Kylie Air was purchased by Kylie Jenner for $72.8 million shortly before the pandemic shutdown. The private jet features an entertainment room, master suite, and huge closet space, according to BuzzFeed. In July, Kylie – whose net worth Forbes reports at $900 million – caught major internet flak for posting a photo of herself and her rapper boyfriend, Travis Scott, embracing in front of their respective private jets. “You wanna take mine or yours?” she wrote on Instagram.

Following the tone-deaf post, BuzzFeed reported that Kylie Air was used regularly for flights totaling less than 15 minutes each. One 17-minute flight – from Camarillo, Calif. to Van Nuys, Calif. – shaved only a half hour off the journey’s travel time, according to Google Maps. BuzzFeed couldn’t confirm who the passengers were for any of the flights. And, to be fair, Kylie didn’t even make the list of the top 10 celebrities with the worst carbon footprint because of private-jet emissions.

But Kim did. She was the seventh-worst, according to data compiled by the environmentally conscious PR firm Yard, just under director Steven Spielberg and ahead of actor Mark Wahlberg. Her private jet, “Kim Air,” emitted 4,268.5 tons of carbon over 57 flights in 2022, according to Yard, which is 609.8 times the average person’s carbon footprint in a year.

Kim recently had Kim Air renovated with an all-cashmere interior and light wood detailing. Showing it off on a recent episode of her family’s Hulu show, she explained: “I wanted it to feel like an extension of me and an extension of my home.”

Ruben Randall - December 16, 2022 0
Actress
Katherine McNamara wants to make one thing abundantly clear: Walker Independence is “not your mama’s Western.” Having grown up in Kansas City, the actress...

How much does Kim Kardashian make in a year? Internet slams...