The fourth episode of Obi-Wan Kenobi on Disney+ brought the battered ex-Jedi Knight (Ewan McGregor) to the water moon of Nur in the Mustafar system to rescue Princess Leia Organa (Vivien Lyra Blair) from the dreaded Fortress Inquisitorius. While there, Obi-Wan — aka “Ben” — makes a rather bone-chilling discovery: the Inquisitors don’t just kill their Force-sensitive targets, they also entomb the dead bodies in amber-like display cases.

It’s a macabre museum exhibit that stands as a testament to the cruel and unusual practices employed by the Empire in its quest to eradicate anyone — Younglings included — who might stand in the way of total galactic domination. Speaking with SYFY WIRE this week, the show’s head writer and executive producer, Joby Harold, explained how this frightening reveal was integral to the main character’s emotional Star Wars journey.

“Obi-Wan’s been in his cave [on Tatooine] and he knows what’s been happening, but he hasn’t been confronted with it and the reality of it and how it’s evolved,” he told us. “In that cave, you are somewhat cut off. Leia calls him to action, but through the course of his journey, he has to confront what has happened to the galaxy and also what’s happened to the Jedi. It stops being theoretical and philosophical and starts being right in his face to the point where it’s a couple of feet away, and he’s faced with this harsh horror. [It was about] finding those places along the way, where he was confronted by the reality of the world now.”

Harold points to the moment in Episode 2, where Obi-Wan comes across the “panhandling soldier” (Temuera Morrison), who was callously tossed aside by the Empire once he outlived his Clone Wars usefulness. That and the tomb realization two episodes later “are moments where you step outside the narrative of the show and you have Obi-Wan get to reflect upon the bigger universe and the timeline. Because it’s such a specific time,” Harold adds.

“[We needed to find] something that could exist in the bowels of that fortress that could be dynamic enough, that it would really impact him in that way was tricky, but also important. And then finding this sort of butterfly display of these Jedi kept in perpetuity [and] forever enshrined in this horrific way. It felt like a really important moment within the bigger journey.”

This week’s stealthy infiltration of the Fortress Inquisitorius sparked an Exogorth-sized amount of excitement among the fan base, which compared certain elements of the daring prison break to one of the missions featured in the Jedi: Fallen Order video game. Harold admits the similarities between the two were no coincidence, revealing that the design team did look to the game for inspiration with “regards to the actual fortress itself and the opportunities that provided.”

He continues: “I know that that was a massive benefit to them, and an exciting opportunity to look to that and help weave everything together within bigger cannon. It’s a very cool facility and it’s a kind of world that we haven’t seen before. It’s intimidating and imposing in its own way, and it’s partly sort of just thinking, ‘What’s the worst place you could ask Obi-Wan to have to go?’ There’s few places that would be more horrific to have to contend with.”

The manhunt for Obi-Wan is currently spearheaded by “Third Sister” Reva (Moses Ingram), a character heavily rumored to harbor a deep resentment for the Jedi Order after witnessing the brutal massacre as a Padawan on Coruscant during Order 66. While that theory has yet to be confirmed, the show does establish Reva’s relentless determination, which leads her to stab the Grand Inquisitor (Rupert Friend) and face the wrath of Lord Vader (Hayden Christensen).

“Story-wise, they were an important part of the puzzle for me, because this is a show about Obi-Wan in hiding and on the run,” Harold says of the Inquisitors. “And it’s also a show where you don’t want that to just be Vader from Page One — you want to slowly pull back the layers and there being the agents of Jedi hunting was a big part of that.”

Episodes 1-4 of Obi-Wan Kenobi are now streaming on Disney+. The fifth and penultimate chapter premieres next Wednesday — June 15. Unfortunately, Harold declined to tease out the last two installments, even in the most general and non-spoiler-y terms: “I … don’t want [Lucasfilm President] Kathleen Kennedy to kick down my door, so I will say only that there are indeed two more episodes.”

Looking for more sci-fi? The entire run of SYFY’s Battlestar Galactica is streaming now on Peacock, along with the second season of Resident Alien, which returns to SYFY this fall with new episodes. 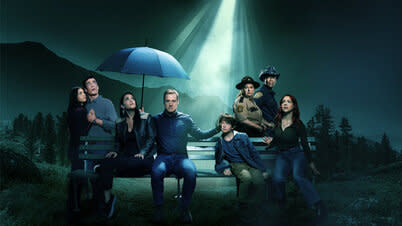 A Look At How The Steel Baron’S Net Worth Changed Between 55 And 72...

Ruben Randall - July 23, 2022 0
Actress
After pulling off what was essentially the biggest crossover in the history of television, The CW has now embarked on a new era of...