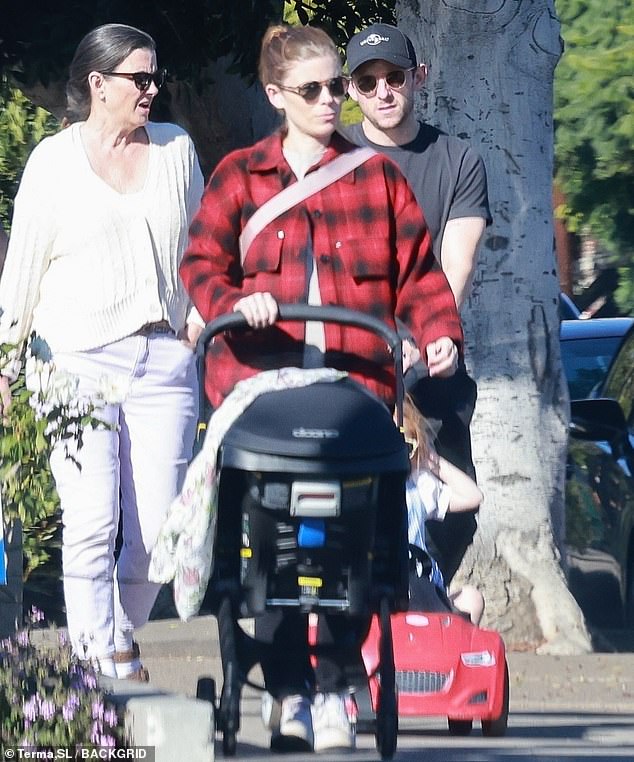 Kate Mara and her husband, Jamie Bell, were spotted for the first time together in Los Feliz on Sunday since welcoming their second child, a baby boy, earlier this month in November.

The House Of Cards actress, 39, and the British-born actor, 36, kept their looks simple and casual as they strolled around the city to get a bit of fresh, autumn air.

The two stars first crossed paths when filming Fantastic Four in 2014, and officially tied the knot three years later. Along with a newborn son, the couple also share a three-year-old daughter.

Sunday outing: Kate Mara, 39, and her husband, Jamie Bell, 36, were seen for the first time together on Sunday since welcoming their newborn son earlier this month in November

Kate opted for comfort for the afternoon outing, and donned a red and black, flannel jacket to help her stay warm in the cooler temperatures.

The actress added a plain white T-shirt underneath and also slipped into a pair of black sweatpants to complete her overall ensemble for the day.

To make walking around the city simple and easy, the mother of two wore a pair of white sneakers that were secured with laces.

She accessorized her look by throwing on a light pink fanny pack over her shoulder to hold a few items she needed during the walk. 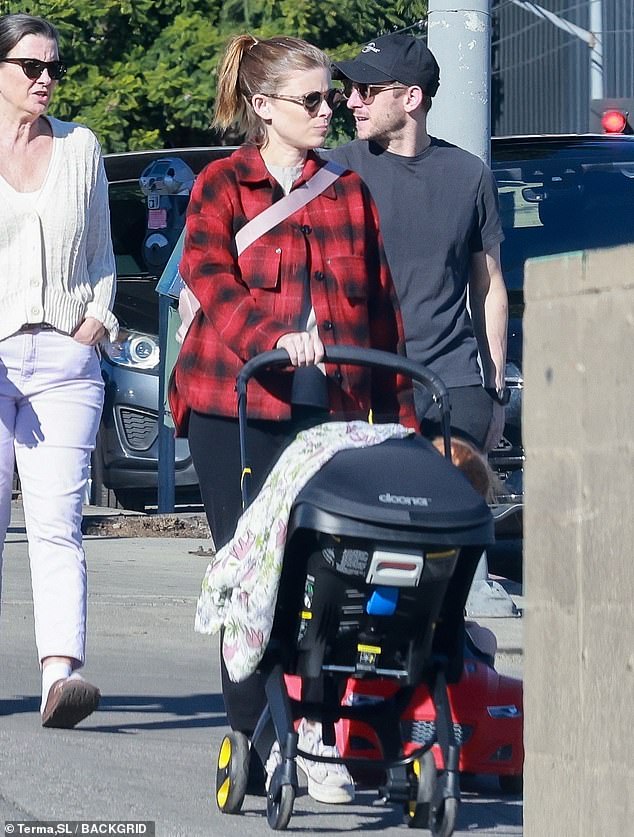 Peaceful stroll: The House Of Cards actress was seen pushing a black stroller holding their newborn son, whose name has yet to be revealed

Kate styled her hair by tossing her locks into a ponytail, and donned a pair of sunglasses to protect her eyes from the bright, California sunshine.

The star, who is the oldest sister of actress Rooney Mara, appeared to be in good spirits as she spent quality time with her family.

Jamie also kept his look simplistic for the Sunday stroll, and opted to wear a plain, gray T-shirt and black pants.

He added a printed cap and shades to also partially block the sun from hitting his face. The Billy Elliot actor was pictured pushing their daughter in a red car stroller along the sidewalk. 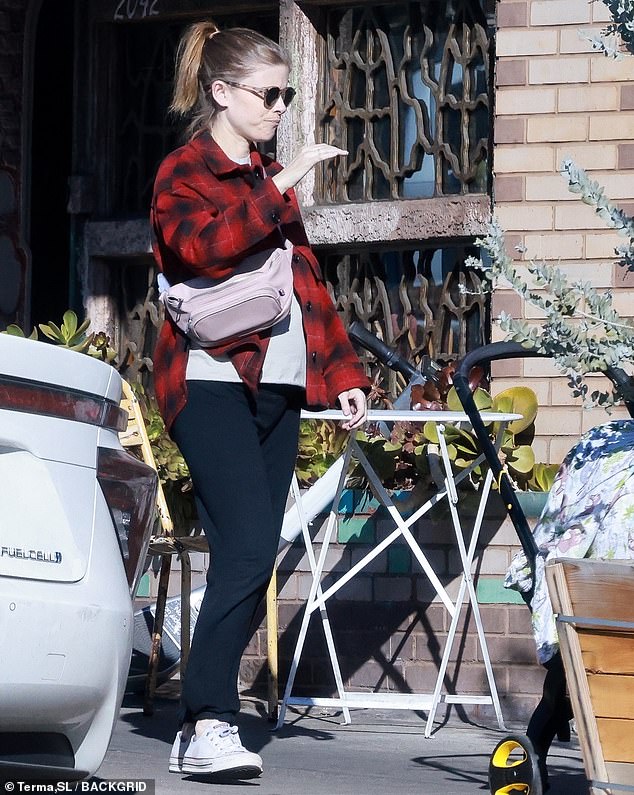 Second child: The happy couple welcomed their son earlier this month in November, and currently share a three-year-old daughter 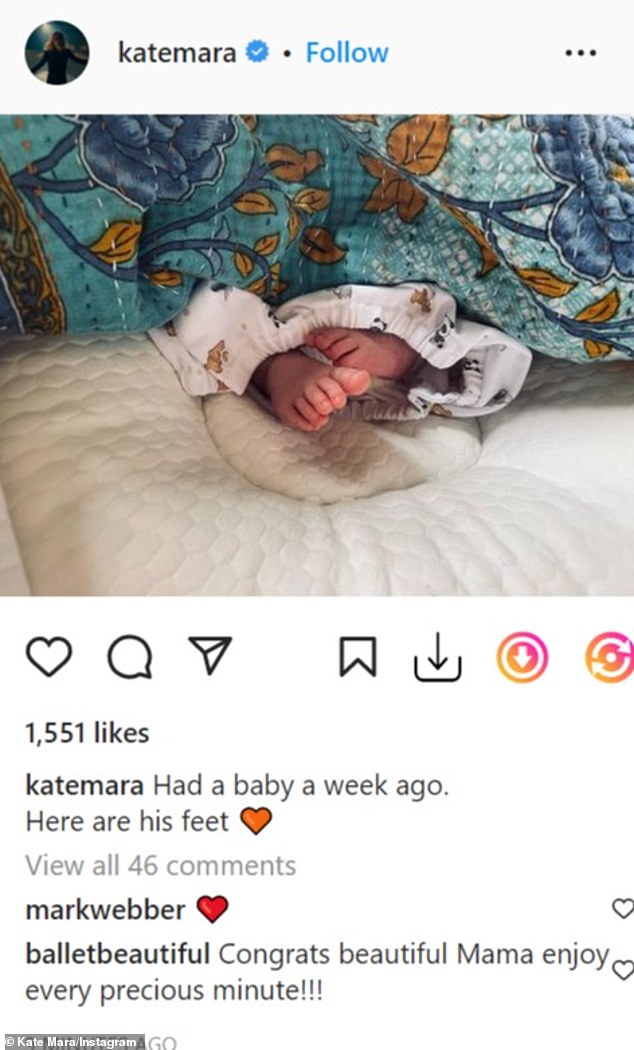 The big news! Kate announced to her fans and followers on Instagram that she had welcomed ‘a baby a week ago’ and showcased a picture of his tiny feet

Kate announced the big news on Instagram last week that their newborn son had been born.

The post contained an adorable snap of their son’s tiny feet. ‘Had a baby a week ago. Here are his feet,’ she captioned the snap. The post did not reveal the child’s name.

The announcement mirrors the post she made revealing the birth of their first child together, a daughter, three years ago.

Kate revealed the birth of her daughter on Instagram by sharing an artistic portrait of the tot’s feet, along with the caption: ‘We had a baby a couple weeks ago…Here are her feet.’ 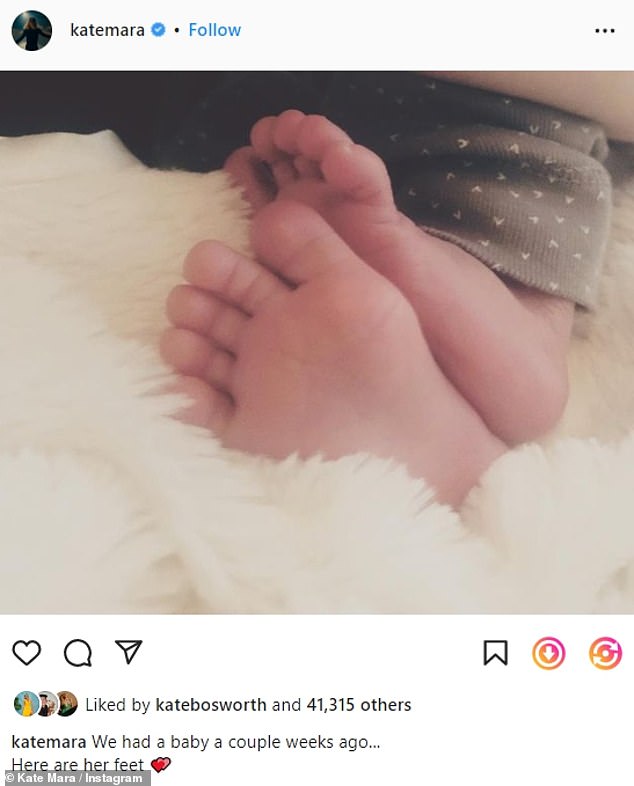 Similar posts: Kate’s baby son announcement was nearly a replica of her Instagram announcement when their baby girl was born in 2019 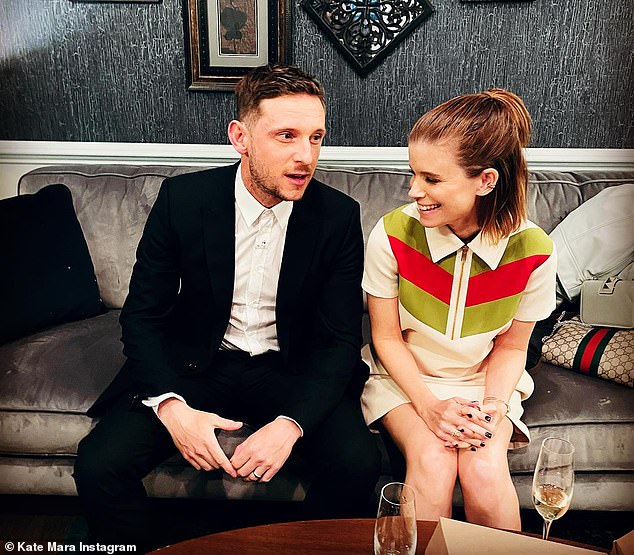 Adorable: Kate and Jamie officially said ‘I do’ in 2017, after the stars crossed paths while filming Fantastic Four in 2014

Mara announced she was expecting baby number two in July on Instagram, posting a glammed-up shot of her and her husband captioned, ‘There are three of us in this pic.’

The two lovebirds initially crossed paths while working on the same set of the hit film, Fantastic Four, earlier in 2014.

The couple began dating soon after, and tied the knot in 2017. They welcomed their daughter in 2019, and their son earlier this month, and have yet to reveal the names of both to the public.

During a past interview with Shape Magazine, Kate expressed that she was ‘very protective’ of her marriage to Jamie, adding, ‘I feel very proud to call Jamie my husband and to have made that commitment to him.’

Jamie was previously married to actress, Evan Rachel Wood, from 2012 until their divorce in 2014. He shares a nine-year-old son with Westworld actress, whom Kate has become stepmother to. 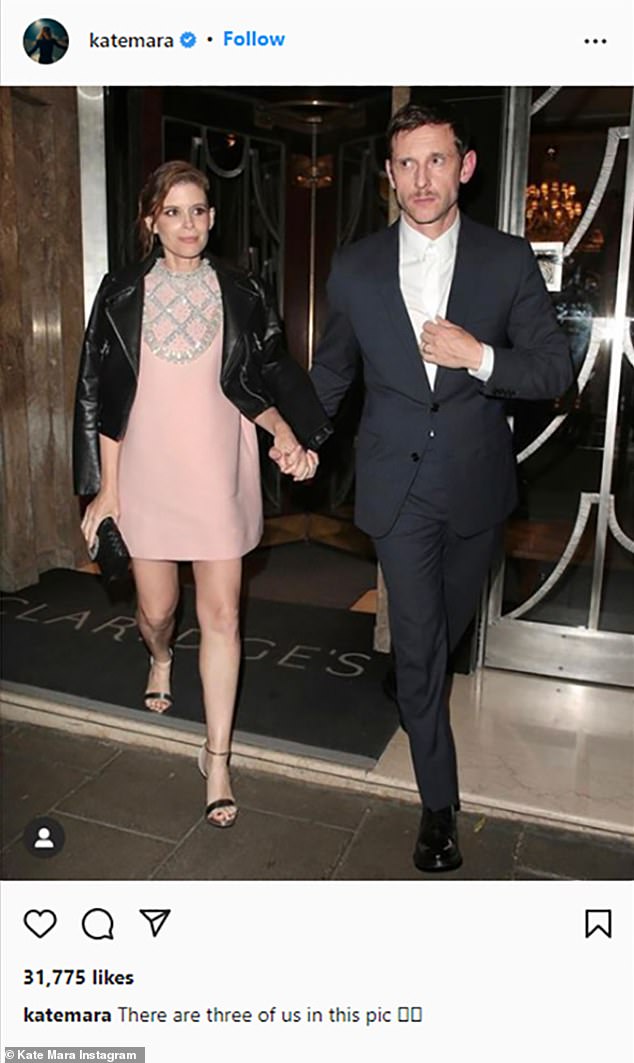 Announcing the news: Kate revealed she was expecting baby number two in an Instagram post in July with the caption, ‘There are three of us in this pic’ 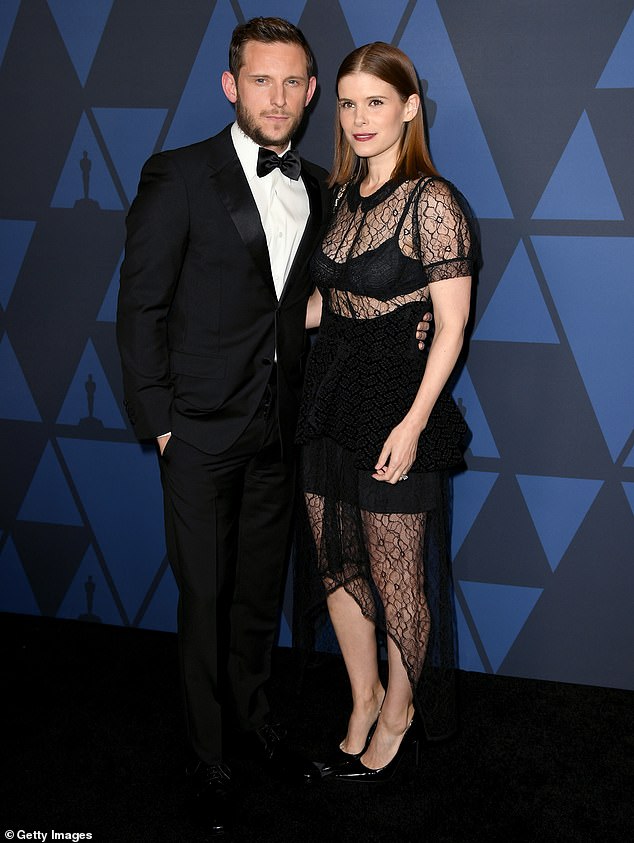 Stepmother: Kate became stepmother to Jamie’s nine-year-old son, whom he shares with ex-wife and Westworld actress, Evan Rachel Wood; the couple seen in 2019 in Hollywood