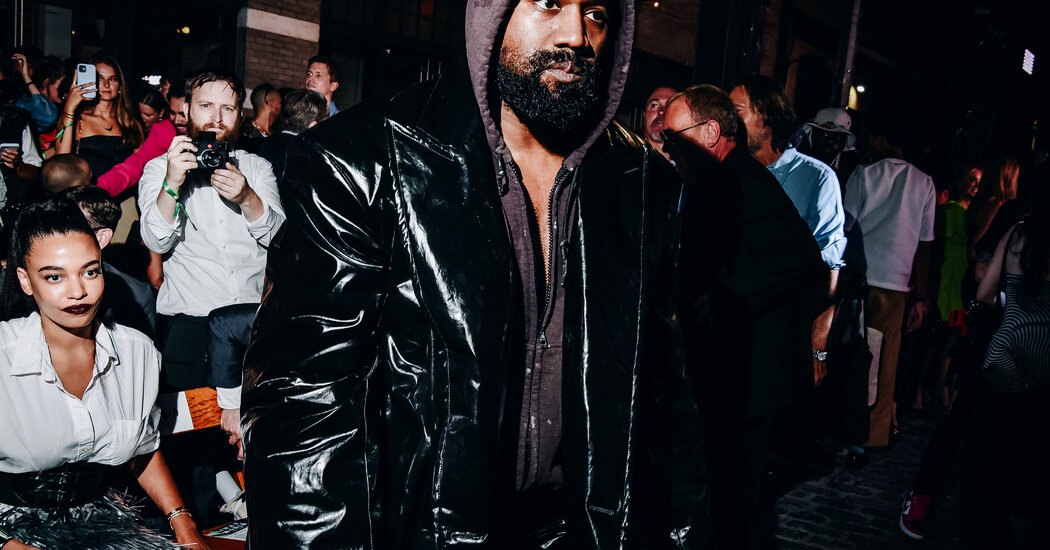 Kanye West has defined most of his career with smash hits and a healthy dose of spectacle and theatrics, helping to redefine the modern concept of celebrity along the way. For a long time, those disruptions were largely welcomed in the music and fashion industries as he cut new creative paths.

But the rapper and designer, who now goes by Ye, has been at the center of several controversies in recent years after increasingly erratic behavior.

In the past 12 months, he’s been burning bridges in the music industry where he made his name. He was disinvited from performing at the Grammy Awards last spring, and abruptly withdrew from headlining this year’s Coachella festival.

In October, his behavior began to have an impact on the more lucrative corner of his empire — fashion — as he came under fire for making a series of antisemitic remarks, including accusing Jews of a “Holocaust” against Black Americans, and wearing a shirt with a slogan associated with white supremacists.

The fallout across industries has been swift.

In mid-September, Ye notified Gap that he was terminating their much anticipated partnership and said that he would move ahead with plans to open his own stores. Gap said in a statement that their visions were “not aligned.”

Kanye West, the rapper and fashion designer who now goes by Ye, has been at the center of several controversies.

Ye began his presentation with a rambling speech in which he complained about his critics. But his own wardrobe choice overshadowed his other designs: Ye wore an oversize shirt with “White Lives Matter” on the back. The Anti-Defamation League has called the phrase hate speech and attributed its origin to white supremacists, who began using it in 2015 in response to the Black Lives Matter movement.

See also  How Much Has He Made From His Career?

The shirt later appeared as part of the collection and Candace Owens, the conservative commentator, accompanied him and was wearing one, too.

Ye suggested on Instagram that Sean Combs, the rapper known as Diddy, was being controlled by Jewish people. Ye’s account was restricted by Instagram that day.

A day later, he lashed out against Jewish people in a series of tweets. Ye tweeted that he would soon go “death con 3 On JEWISH PEOPLE,” a reference to the United States’ defense readiness condition, known as Def. Con.

The social media comments put his relationships with fashion companies in jeopardy. Adidas, the German sneaker giant whose collaboration with Yeezy was estimated to be worth billions, said it had it had placed the relationship under “review.”

A week later, Balenciaga, the fashion house that had partnered with Ye in his Yeezy Gap project and opened its runway show in Paris with an appearance by him, deleted pictures and videos of him from the show. Vogue Runway did the same, and Vogue magazine said it would no longer work with Ye.

During an interview on the podcast “Drink Champs,” Ye falsely said George Floyd died from fentanyl use, not from a Minneapolis police officer’s kneeling on Mr. Floyd’s neck for more than eight minutes. He also repeatedly accused “Jewish media” and “Jewish Zionists” for feeding a paparazzi frenzy and canceling his shows.

The parent company of Parler, a social media platform known for its right-wing audience, said Ye would acquire the site for an undisclosed sum of money. George Farmer, the chief executive of Parler’s parent company, Parlement Technologies, is married to Owens, the conservative commentator, who had appeared at Ye’s fashion week event.

Kerring, Balenciaga’s parent company, told Women’s Wear Daily that “Balenciaga has no longer any relationship nor plans for any future projects related to this artist.” Creative Artists Agency, one of the world’s major booking agencies, no longer represents the entertainer. The film and television studio MRC announced that it was shelving a completed documentary about Ye.

But the biggest and most anticipated breakup was between Ye and Adidas. On Oct. 25, after weeks of pressure, Adidas announced that it would cut ties with Ye after a nearly decade-long partnership, a move the sports apparel giant said would cost it 250 million euros ($246 million) this year. Forbes reported that the partnership accounted for $1.5 billion of Ye’s net worth and, without it, he would lose his billionaire status.

Despite Ye’s “just awful” comments, Daniel Ek, the chief executive of Spotify, told Reuters that it would not remove the rapper’s music from the platform because his music did not violate Spotify’s anti-hate policies.

The empire continues to crumble.

Ye’s enterprises beyond fashion also faced pushback. Aaron Donald of the Los Angeles Rams and Jaylen Brown of the Boston Celtics said on Twitter that they were cutting ties with Donda Sports, Ye’s marketing agency, because of the antisemitic remarks.

On Oct. 26, the organizers of two prominent high school boys’ basketball tournaments revoked invitations for Ye’s Donda Academy team to play in national showcases this season. Ye founded Donda Academy last year in Simi Valley, Calif. The private school is named after Ye’s mother, Donda West, who died in 2007. The school is not accredited and was built around online learning.

The same day, the footwear company Skechers said Ye had been escorted from its corporate offices in Los Angeles after an “unannounced and uninvited” visit.

Is Abortion Sacred? | The New Yorker