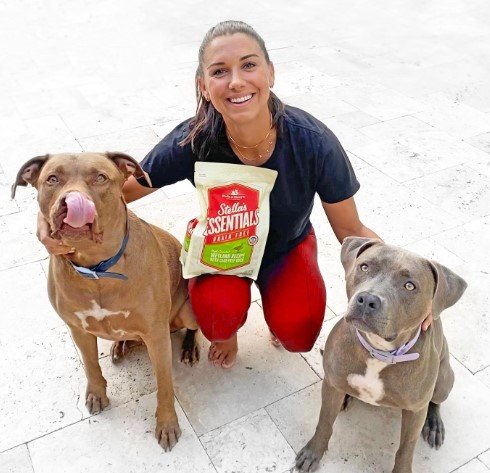 In recent years, there has been observed a dynamic shift in eating patterns in society. This has entered the sports world too, with more and more sports entities going vegan. The crowd has grown heavy with names such as NFL star Tom Brady and “Austrian Oak” Arnold Schwarzenegger. One of the latest names to join the Vegan cause is the soccer star, Alex Morgan.

Morgan turned to veganism in 2017 and hasn’t looked back. This soccer queen is highly active in the cause of animal protection and was awarded The Most Beautiful Vegan by PETA in 2019. Morgan is a mother and according to a 2019 interview, she wants to set an example of animal protection, urging people to be loving but not selectively.

Alex Morgan turns vegan and urges others to do the same

Alex has been ruling the women’s soccer team since 2010 and since then she’s played around 190 matches. And, has scored around 118 goals. Her Olympic records are equally impressive with 1 gold and 1 bronze medal. This co-captain of the soccer team once opened up about her reasons for turning vegan.

In a 2019 interview, she said, “I’m passionate about giving animals a voice.” She also said that adopting her pups helped her to identify the selected cruelty towards some animals. “… it didn’t feel fair to have a dog I adore, and yet eat meat all the time,” she said. But others like Lewis Hamilton, Tom Brady, and Arnold Schwarzenegger are also a part of this vegan movement.

See also  'House of the Dragon': Who is Olivia Cooke's Lady Alicent Hightower? Meet the character who betrayed Rhaenyra

ALSO, READ THIS:  “Powerhouse Aunties”: USWNT Power Couple Is Thrilled to Have Megan Rapinoe, Alex Morgan, and Others as Role Models for Their Daughter

Schwarzenegger had turned vegan during the lockdown period while he was staying home living with his pet Lulu. Lewis Hamilton had also spoken about his reason to go. He said, “animal cruelty, global warming, and our personal health are at stake.”  NFL star Tom Brady also follows a mostly vegan diet. He is not totally vegan as he still consumes some meat.

Alex is a three-time Olympian so she has to take her dietary habits very seriously. Morgan and her soccer player husband Servando Carrasco have to follow a regimented diet to stay in their top form.

Morgan has commented on their eating habits, saying that they follow a balanced diet with more importance on protein. She is also been seen eating a lot of healthy fats to keep her young and fit. She is a big coffee person but also enjoys sipping a glass of red wine on a holiday.

Alex along with other stars is on a mission to transform the diet game. She is also urging her fans to look at food in a different way.

Here’s who has quit Twitter since Elon Musk took over

Ruben Randall - November 3, 2022 0
Money
Comment on this storyCommentIn the months of wrenching uncertainty and endless court filings ahead of Elon Musk’s takeover of Twitter, some distraught users swore...